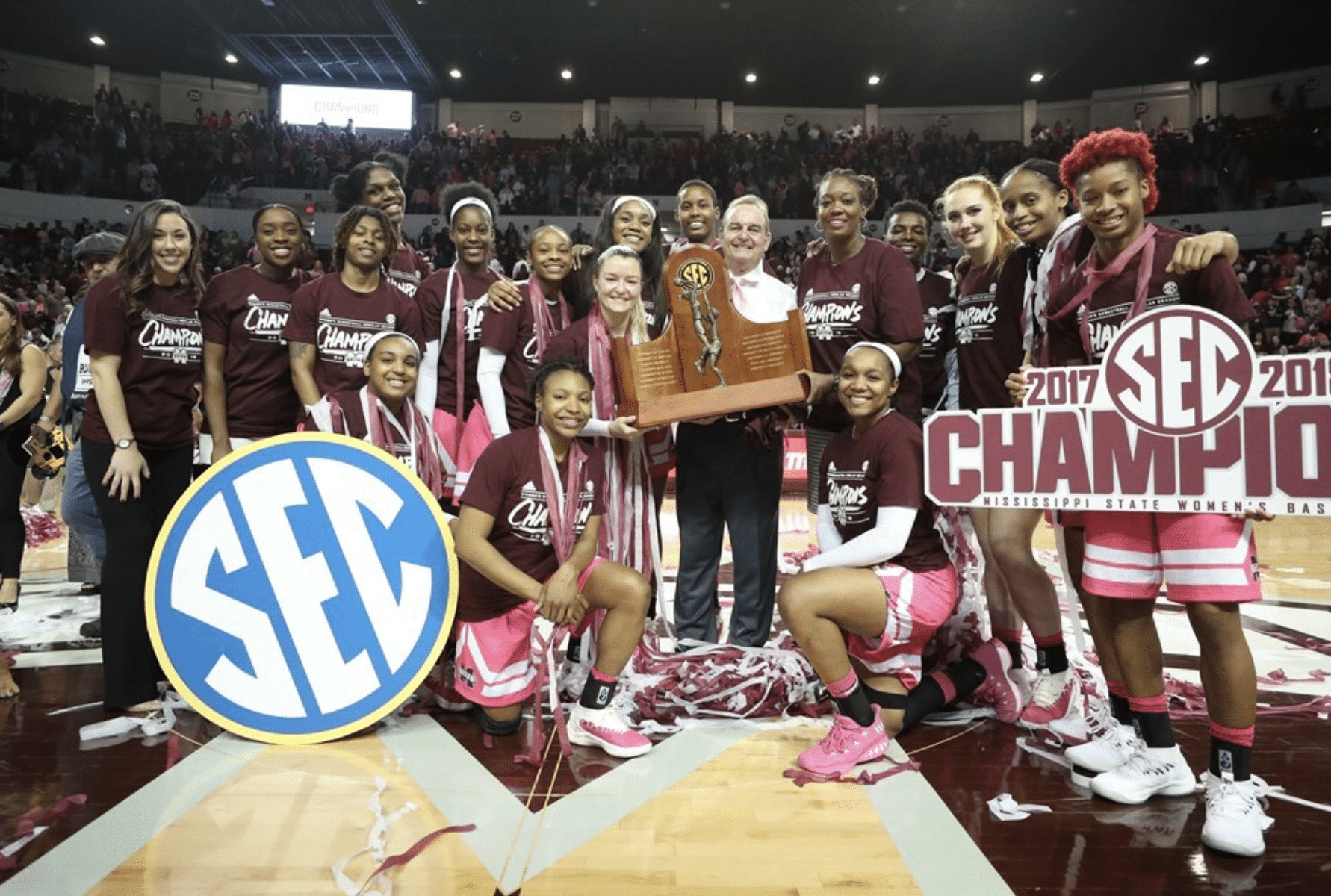 With less than two minutes remaining, another Humphrey Coliseum crowd broke out the “S-E-C, S-E-C” chant.

No. 2 Mississippi State completed its climb to the top of the nation’s best conference in women’s basketball with a 76-55 win against No. 17/18 Texas A&M before a third-straight sellout crowd of 9,933.

MSU improved to 28-0 overall, 14-0 in conference play and 15-0 at home. The Bulldogs set a new school record conference victories in a season while claiming outright the program’s first-ever regular-season Southeastern Conference championship in any women’s sport.

The Bulldogs will try to complete the undefeated regular season against Auburn at home Thursday and Kentucky in Lexington, Ky. Sunday. Texas A&M fell to 20-8 and 9-5.

“Today was special for these young ladies, my family and my Mississippi State family,” MSU head coach Vic Schaefer said. “It was a great atmosphere. Texas A&M has an excellent team. I thought we were spectacular the way we defended. We really came out of the blocks ready to go.

“Playing in this league, coaching in this league is a grind. You are playing against the best players and coaches in the nation. To be able (to win the SEC championship) before our Mississippi State family was special.”

Victoria Vivians and Teaira McCowan each had double-doubles to lead the Bulldogs. Vivians had 26 points and 12 rebounds, while McCowan had 11 points and 11 rebounds. Roshunda Johnson added 16 points, while Morgan William had 12 points and Blair Schaefer had 11 points.

William also had four rebounds and seven assists, while McCowan had a pair of blocks.

The Bulldogs came roaring out of the gates with the game’s first 11 points. A 3-pointer by Vivians started the scoring and back-to-back 3-pointers by Johnson ended the run.

A 3-pointer by Vivians ended the quarter with the Bulldogs leading 24-9.

Texas A&M made some defensive adjustments and climbed back into the game in the second quarter. After a 3-pointer by Schaefer ran the lead to 29-13, the Aggies responded with 10 straight points to close within 29-23.

Vivians followed with a short jumper in the lane and a 3-point basket to get the Bulldogs back going again. MSU led 36-25 at halftime.

A 9-0 run midway through the second quarter stretched lead to 52-32 with 3:58 left the third quarter. The Aggies got no closer than 15 the rest of the way.

Texas A&M held a 43-36 rebounding advantage. The Bulldogs had 13 assists and 10 turnovers, while the Aggies had three assists and 16 turnovers.

MSU will play its final home game of the regular season Thursday night when Auburn comes to Humphrey Coliseum. The Bulldogs and Tigers meet at 7 p.m., with the broadcast available on SEC Network +.