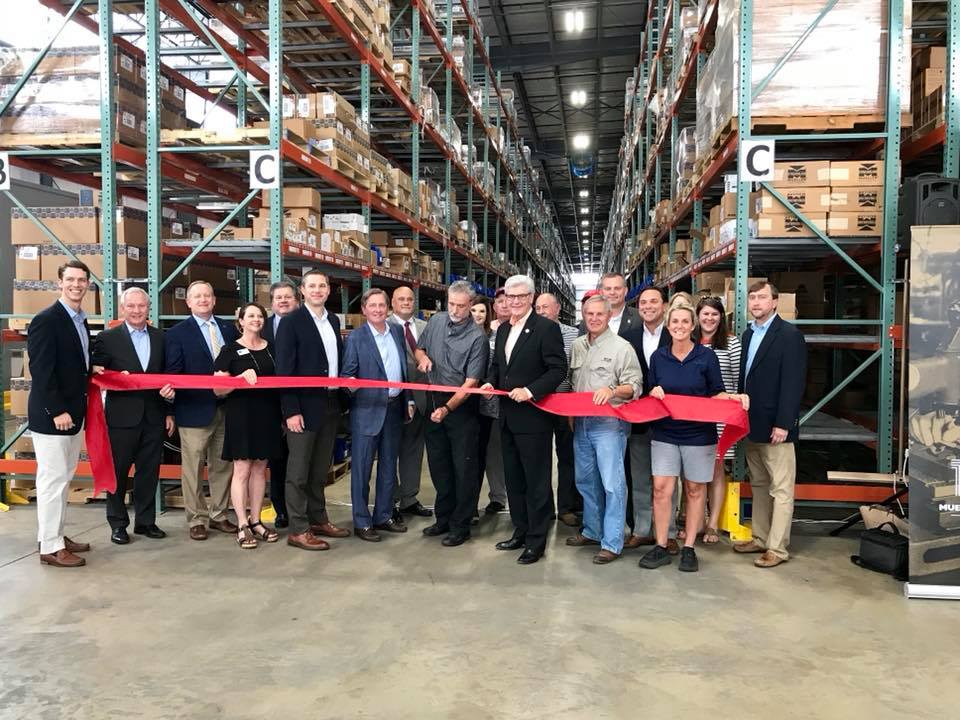 Gov. Phil Bryant and officials from Mueller Industries cut the ribbon on the company’s new warehousing and distribution operations in Fulton, Miss. The project is a $3.83 million corporate investment which adds 60 new jobs.

“Mueller’s location in Northeast Mississippi provides numerous benefits, including exceptional access to a well-integrated transportation system so the company can quickly and efficiently reach its customers,” said Governor Phil Bryant. “The region’s workforce is highly skilled in the manufacturing and distribution industries and will also play a critical role in Mueller’s continued success in Itawamba County.”

Mueller manufactures and distributes plumbing, HVAC, refrigeration and industrial products, including tubes, fitting, and valves. The company chose to expand in Fulton by adding a distribution facility adjacent to its manufacturing facility to help meet an increase in consumer demand. Prior to constructing the new 74,000-square-foot facility, Mueller renovated an industrial site next to its manufacturing facility by removing obstructions and performing site work, relocating water and gas lines and installing concrete and HDPE pipe. The company also installed fencing, fire hydrants, storm drain inlets and erosion control.

“Mueller Industries has been supporting Northeast Mississippi since the late sixties,” said Mueller Industries CFO Jeff Martin. “Our Fulton warehousing and distribution investments are the latest examples in our long history of working with local and state authorities to provide jobs, growth and new developments to the region. We are proud to be able to work with MDA, the Itawamba County Board of Supervisors, Three Rivers Planning and Development District and the city of Fulton in bringing these new facilities, and opportunities, to fruition.”

“Mueller’s decision to add distribution operations in Fulton is evidence of the fact Mississippians are hard workers who strive to help companies grow and achieve their goals in our state,” said MDA Executive Director Glenn McCullough, Jr. “The teamwork of MDA, the Itawamba County Board of Supervisors and Three Rivers Planning and Development District was instrumental in bringing dozens of new career opportunities to Mississippians in Itawamba County.”

The 60 new jobs have already been filled, bringing employment at the company’s Fulton location to 615 workers.