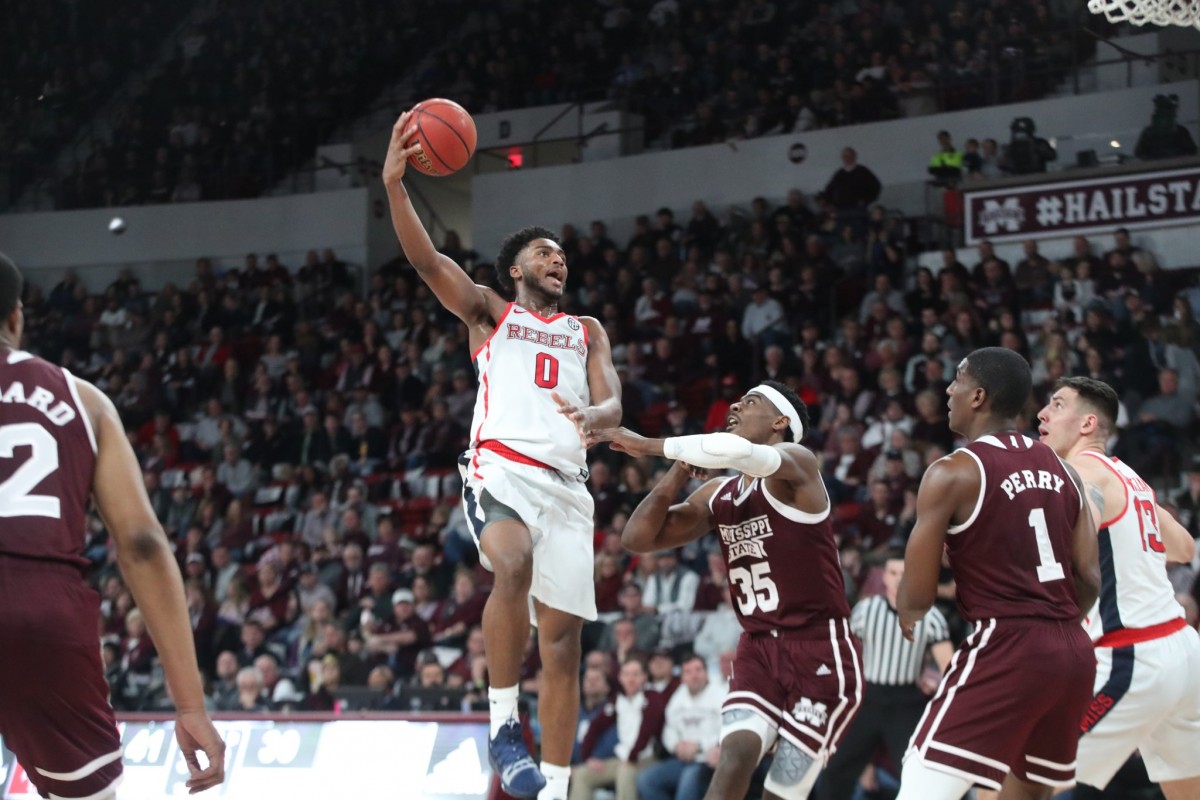 It’s been some time since an early-season matchup between Ole Miss and Mississippi State had this much hype surrounding it, and the game lived up to that hype with the Rebels picking up an 81-77 win.

Both teams were 12-2 coming into the game inside of Humphrey Coliseum, and the Rebels were able to outlast the Bulldogs in a back-and-forth game to pick up their 10th straight win, and their second straight win over a ranked opponent.

With lead changes throughout the game, Ole Miss eventually took their largest lead of the game with 7 minutes left to play, but Mississippi State stormed right back. The Rebels led 72-64, but over the next 5 minutes, it was all MSU. The Bulldogs had cut the Ole Miss lead to 77-74, and with 1:22 left, Nick Weatherspoon nailed a 3-pointer to tie the game.

The Rebels would respond as Breein Tyree knifed through the MSU defense for a layup to regain the lead on their next possession. Down by 2 with 20 seconds left, the Bulldogs had a chance to tie the game or take the lead after a missed FT by Ole Miss’ Devontae Shuler, but Lamar Peters missed a jumper and Abdul Ado couldn’t secure an offensive rebound. Two FTs from Tyree iced it, and the Rebels walked out of Starkville with a win.

For Ole Miss, they’re 3-0 in SEC play and they’ve gotten big games from three different players in those games. Today, it was Blake Hinson’s turn as the freshman turned in a 26-point performance, and he was instrumental in bringing the Rebels back from large deficits in both the first and second halves.

MSU had a 14-0 run in the first half and a 7-0 run to open the second half, but the Rebels continued to find answers. With Hinson commanding a lot of attention, it also allowed players like Bruce Stevens to get open, and Stevens hit two straight threes to help the Rebels build their lead in the second half.

During those runs, with the crowd behind them, it appeared that the Bulldogs were going to run away with this one, but down the stretch, they couldn’t hold on. After the game, head coach Ben Howland said that he was disappointed in some of the quick shots his team was taking rather than staying in their offense.

Howland asked about those quick 3’s late in the game, laments the fact his team isn’t trusting each other enough.

MSU was led in scoring by Quinndary Weatherspoon with 18 points. After getting just 2 points from their bench against South Carolina, the bench did contribute 18 points today. Ole Miss wasn’t able to establish anything inside for most of the game thanks to Ado’s presence. Ado had a couple of blocks, and Ole Miss didn’t attack the basket much.

With Hinson leading the way for Ole Miss, Tyree added 19 points with Terence Davis putting up 12 after his big night against Auburn. The Rebels were outrebounded 38-30, but Stevens had 8 boards to lead the team.

Both teams shot 46% from the floor and the two teams combined to take 52 shots from beyond the arc (31 for Ole Miss and 21 for MSU).

Earlier this week, Ole Miss upset #11 Auburn at home to earn their first win over a ranked opponent since 2015. Now, they’ve beaten #14 Mississippi State and they’ll find themselves in the top-25 with their eyes on returning to the NCAA Tournament. In just his first season, it’s clear that head coach Kermit Davis has the Rebels moving in the right direction.

Mississippi State is 12-3, but they’re now 0-2 in the SEC. With a game against Florida on Tuesday, they’ll need to regroup and string a few wins together to get their confidence back.

As for the in-state rivalry, the Rebels have now won 9 of the last 11 meetings on the hardwood.