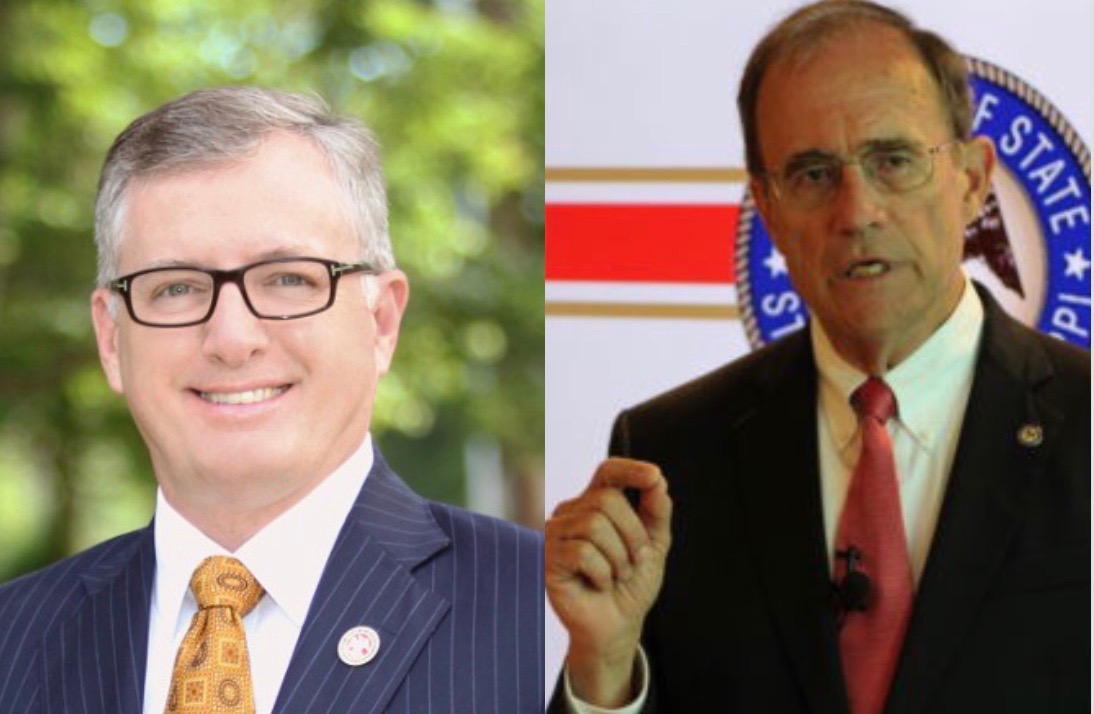 Hughes photo courtesy of Jay Hughes - Hosemann photo by News Mississippi - Graphic created by News Mississippi.
Lieutenant Governor Candidate Jay Hughes (D- Lafayette), has called upon Secretary of State Delbert Hosemann to resign his office while he runs for the position of Lieutenant Governor. Hosemann officially announced his intention to run for the state’s second highest elected office on Wednesday and Hughes says there is a conflict of interest.
Hosemann’s position as Secretary of State includes his duties as Mississippi’s Chief Elections Officer who has the authority of election oversight and disputes and irregularities related to them.
“One of the most important pillars of our state government is a fair and trusted election process where there is nonbiased supervision of the entire process,” Hughes said.
In addition, Hughes said Secretary Hosemann spent public dollars during his time in office promoting his name and likeness through email, internet, radio, television, and in polling places.

“In these 2019 elections, with such a divided political environment,” Hughes wrote to Hosemann. “Popular confidence could be undermined because you will be overseeing the election in which you are a candidate for one of the highest offices in the state. This conflict, on its face, is contrary to the most fundamental principle of elections – that an independent and impartial election authority manages the electoral process.”

“Because Secretary Hosemann also has the final say in election disputes, only he can decide if he should step aside and let an independent person be in charge of election oversight during the 2019 election,” Hughes said. “This is no different than getting to be the judge and jury in your own trial.”
Mississippi is one of only three states holding gubernatorial elections in 2019. Primary elections will be held on August 6, 2019, with the general election on November 5, 2019.
previous post

A day after: Four observations from Ole Miss’ win at Mississippi State