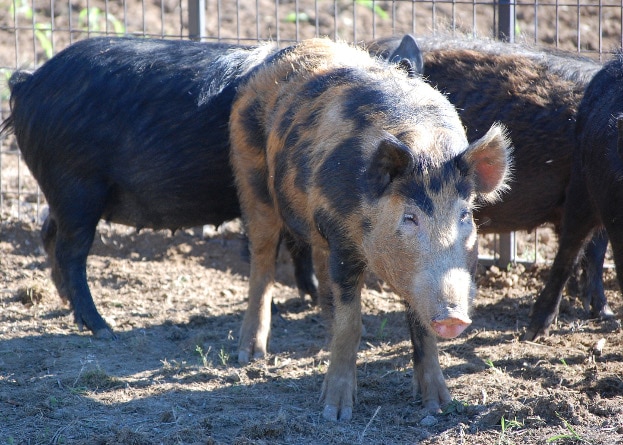 The first rule of transporting wild hogs is to not transport wild hogs.

Bronson Strickland is the Mississippi State University Extension Service wildlife biologist and management specialist. He said the best way residents can help eradicate wild hogs is to hunt them while also trapping and killing them.

Hunters who bring wild hogs into the state or relocate them for hunting, however, are committing a crime.

“Transporting and releasing wild hogs is illegal, and this is the root of the problem we are having with these animals in Mississippi and all throughout the Southeast,” said Strickland. “We are seeing major issues with these animals because they are being moved and released into areas where they can harm people and their property. The future of Mississippi farms, land and wildlife depends on hunters understanding that wild hogs are not trophies, but pests.”

On private land, there is no limit or season for hunting wild hogs or any nuisance animals. Anthony Ballard, a nuisance wildlife biologist with the Mississippi Department of Wildlife, Fisheries, and Parks, advised people who hunt wild hogs at night to take precautions.

“Call your county conservation office and sheriff’s office before hunting to let them know where you are, what you’ll be doing and how long you plan to be there,” said Ballard. “Be aware of your surroundings, including any nearby houses and roads. Black bears have been spotted in almost all parts of the state, so make sure you’re aiming at a black pig instead of a black bear.”

However, be careful with the rules because public wildlife management areas, or WMAs, have different regulations. Those regulations can be found here.

“On our WMAs, wild hogs can only be taken incidentally,” said Ballard. “For example, wild hogs can be taken during the small-game season, but only with weapons and ammunition that can be legally used to hunt small game in that area. We encourage hunters to take any opportunity they have to neutralize wild hogs, but a season dedicated to wild hogs would make them harder to trap for our WMA personnel and would ultimately be less effective at removing them.”

Ballard said that a violation of the law prohibiting live wild hog transport carries a fine of $2,000 to $5,000, a jail term of up to five days and forfeiture of all hunting, trapping and fishing privileges for at least a year.

Landowners affected by wild hog damage often set traps to capture the pests before they do more harm. The sophistication of these traps depends on the landowners’ needs and budgets, but all live cage traps for wild hogs must have a trap door, slide gate or similar mechanism.

Mississippi also requires that traps have an opening at the top so nontarget species like deer and bears can escape.

While Strickland said that corral traps are the most effective for wild hogs, box and cage traps are often used as well.

“Large corral traps can capture the entire social unit, called a sounder, in a single trapping event,” said Strickland. “This is important because hogs are smart animals and become ‘trap shy.’ That’s why we recommend landowners catch the entire sounder on the first attempt.”

Bait, most commonly corn and grain, lures hogs into a trap, but it can only be placed directly on the ground inside the corral. Bait used outside the trap must be in an aboveground, covered feeder such as a trough.

“You can use grain products from the day after the spring turkey season to the day before archery season opens, but only in aboveground feeders or stationary spin-cast feeders,” said Ballard. “Feeders can be placed in plain sight with no distance restriction, but areas must be clear of all bait for 10 days before hunting game animals.”

Electronics are not strictly necessary for traps to effectively snare hogs. However, placing cameras in areas where damage is found improves the chances of catching the animals.

Cameras help identify where the pests are coming from and how many there are.

Ballard added that the trap should face the trail and that a larger structure is more likely to attract the hogs and make them begin to trust the trap and that when trying to trap the hogs, give the animals time to feel comfortable entering the trap regularly.

Strickland recommends using at least a .22-caliber rifle to euthanize the hogs once the door is dropped.

“A shot to the brain cavity will result in a quick, humane death,” said Strickland.