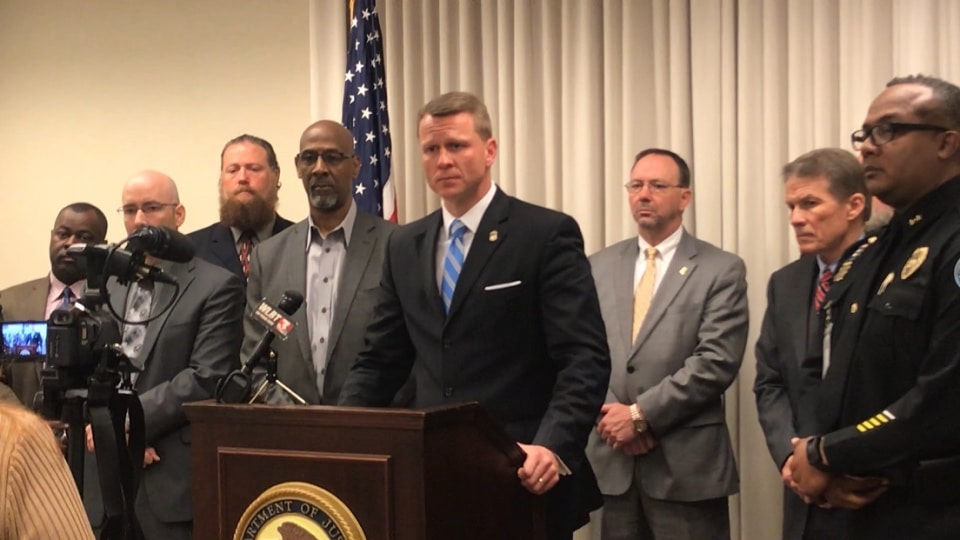 Project EJECT will be expanding into the city of Hattiesburg. U.S. Attorney for the Southern District of Mississippi, Mike Hurst, along with the Hattiesburg Police Department, the Bureau of Alcohol, Tobacco, Firearms and Explosives, local District Attorneys’ Offices, other federal, state and local law enforcement agencies announced the expansion of Project EJECT to combat violent crime.

Project EJECT was first launched in December 2017 by the U.S. Attorney’s Office in the City of Jackson under the U.S. Department of Justice’s Project Safe Neighborhoods (“PSN”) initiative. In expanding the initiative into other parts of the Southern District of Mississippi, Project EJECT will now stand for: “Empower Justice Expel Crime Together.”

Part of the project will include discussions with the public and encouraging communities to help law enforcement in this effort, as well as communicating to the criminals that they will be prosecuted and punished for gun crimes and violent crimes. The Project will also seek to support locally-based efforts to stop violence and crimes before they occur and to help those who have been punished to reenter society as law-abiding citizens.

“Today, we are excited about this new partnership with the Hattiesburg Police Department, our local District Attorneys, other law enforcement, our community, and most importantly our citizens, all coming together to combat and prevent violent crime in our Hub City,” said Hurst. “By empowering our neighbors, our churches, our schools, our businesses, and others, we will achieve justice. By expelling crime, we will make Hattiesburg safer. By working together, we will benefit all.”

Hurst continued saying the message to violent criminals in Hattiesburg is simple.

“If you violate our laws and terrorize our neighborhoods, you will be ejected from our community,” said Hurst. “In the federal system, we will immediately lock you up, we will move to detain you without bond, and you will serve a significant prison sentence without parole. But, there is also hope. If you break the law and are ejected, there is grace on the other side. After you serve your sentence, choose to be rehabilitated, follow the law, and re-enter society as a law-abiding citizen. The ultimate goal of Project EJECT is a safer Mississippi for everyone.”

Project EJECT is comprised of a number of federal law enforcement agencies, as well as task force officers from various state and local investigative agencies, who will interact regularly with the Hattiesburg Police Department and District Attorneys’ Offices to identify and respond to violent crimes when they occur. Cases arising from these crimes will then be presented to the local District Attorneys’ Offices and the U.S. Attorney’s Office for prosecution.

For the first time ever, the U.S. Attorney’s Office is specifically dedicating an Assistant United States Attorney in Jackson to prosecute violent crime in the City of Hattiesburg under this project.

“When criminals actively engage in violent drug and firearms crime in our communities, ATF will use all its resources to stop them,” said Special Agent in Charge Dana Nichols, ATF New Orleans Field Division. “One resource is ATF’s Crime Gun Intelligence Centers. These CGICs, in partnership with law enforcement, help identify active armed violent offenders for investigation to stop the violence. Make no mistake, ATF is committed to working with our law enforcement partners to keep our neighborhoods safe and take those individuals off our streets who would do harm to our citizens.”

In addition, to the announcement, U.S. Attorney Hurst announced the indictment and arrest of seven defendants under Project EJECT in and around Hattiesburg:

Jerry Ingram, 59, of Hattiesburg – charged with possession of a firearm by a convicted felon;

Christopher Harper, 40, of Hattiesburg – charged with possession with intent to distribute methamphetamine;

Randy Chavis, 27, of Lumberton – charged with possession with intent to distribute methamphetamine, and use of a firearm in furtherance of drug trafficking crime;

Jessie Hunter, 29, of Hattiesburg – charged with sale of a firearm to a convicted felon.

In December 2018, at the 2018 Project Safe Neighborhoods (PSN) National Conference, Acting Attorney General Matthew Whitaker presented the U.S. Attorney’s Office for the Southern District of Mississippi and its law enforcement partners with the award for Outstanding Overall Partnership/Task Force for Project EJECT. Only 16 awards were given during the annual PSN National Conference, which recognizes individuals and groups for their dedication and contribution to the success of PSN. Project EJECT was one of only two recognized as the best partnerships or task forces in the nation.