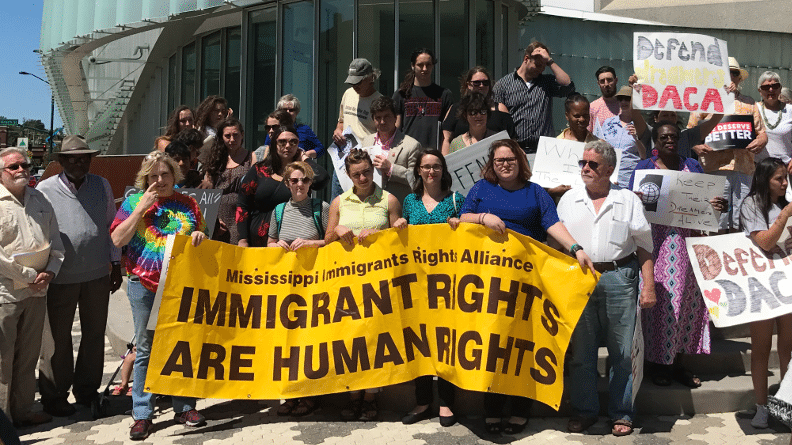 This afternoon, some 30 people marched to Senator Thad Cochran’s office in Jackson to protest saying that DACA should remain in place.

DACA, also known as Deferred Action for Childhood Arrivals recently came under fire when President trump called for the end of DACA.

Dax Fairchild, a School Teacher in Scott County said many of his students are a part of DACA.

“Regardless of immigration laws, DACA pertains mainly to student aged individuals and so we have got to realize that kids are involved here,” said Dax Fairchild. “So we certainly, regardless of your agreement on the implementation of DACA or not, as humans we have got to have empathy.”

The protest began by attendees marching to Cochran’s office building chanting that immigrants should be welcome in the U.S.

Brenda Ramirez was in attendance at the protest and she spoke to the crowd through her tears.

“I just wish that the government wouldn’t take DACA away from us dreamers,” said Ramirez. “I have a lot of goals in my life that I want to accomplish and I just honestly feel like this is not right. This is something that is really hurtful for us.”

Ramirez is 18-years-old and is a recipient of DACA. She recently graduated from Ridgeland high school in May.