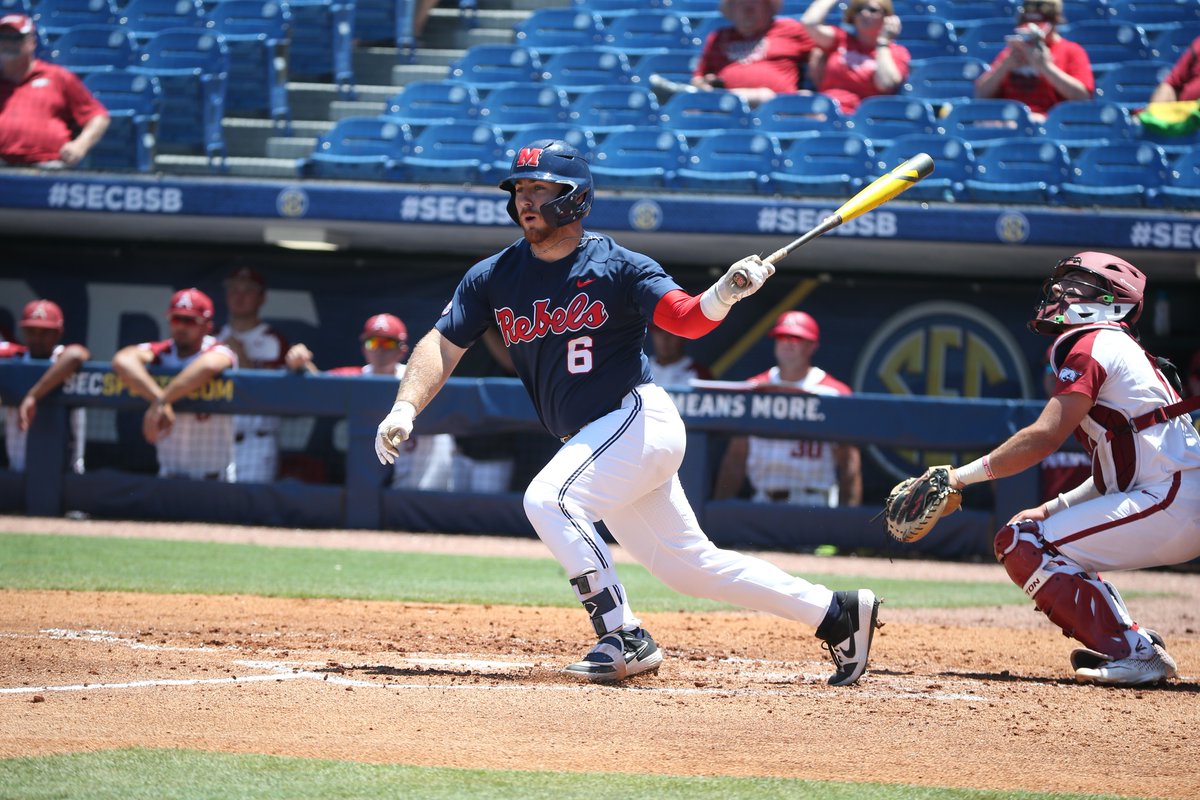 HOOVER — A cleanly played baseball game from his supporting cast could have issued Zack Phillips a more favorable fate, but the left-hander received insufficient defensive play and run support in a 5-3 loss to Arkansas on Wednesday.

The Rebels will play a loser’s bracket elimination game against Texas A&M on Thursday morning at 9:30.

Phillips lasted 5.1 innings, allowed four earned runs on four hits with three strikeouts and two walks. Ole Miss made two errors behind Phillips. In addition to the two blunders, Kevin Graham bobbled a ground ball in the first inning that prevented him from extinguishing the lead runner or turning a double play, and eventually led to a run and an early 1-0 lead for the Razorbacks.

“He was terrific and we didn’t help him defensively,” head coach Mike Bianco said. “He pitched his heart out and made some good pitches against a really good offense. ”

Arkansas tacked on another run in the third after a leadoff double from Jacob Nesbit. Phillips did well to escape a runners at the corners, no-outs situation with only one run of damage. He nearly escaped it entirely, but Matt Goodheart beat out a would-be 3-6-1 inning-ending double play ball that allowed Nesbit to cross the plate safely. Phillips has often struggled with damage control when things go awry, but pitched out of a couple of jams in this game and showed better command than he has at other times this season.

“I felt good about how I pitched today,” Phillips said. “It just wasn’t enough.”

The final batter Phillips faced in the sixth inning did the most damage to his line and turned the game. Ole Miss had taken a 3-2 lead in the top half of the sixth. Phillips allowed a leadoff walk to Casey Martin after a changeup slipped away and out of the strike zone. He hit Dominic Fletcher two batters later with a fastball that veered too far inside. Both runners moved up a base on a wild pitch. Phillips was an out away from stranding the two mistakes but Jack Henley tagged him for a 2-RBI single to left field that was ultimately the difference in the game. Phillips exited the mound in favor of Austin Miller and walked back to the dugout with a sour end result.

Bianco took responsibility for the fateful base hit from Henley, citing that a breaking ball should’ve been called instead of a fastball. That at-bat aside, Phillips deserved a better fate than he was dealt.

The Rebels tied the game in the fifth inning on a Thomas Dillard RBI single followed by a Grae Kessinger sacrifice fly. Dillard now has nine hits in four games since being moved up to the leadoff spot. Dillard is seeing more fastballs and his .445 on-base percentage is more valuable in that role. He has struggled to drive the baseball out of the ballpark this season, tallying only two home runs in SEC play.

“It has taken a little bit of pressure off of me,” Dillard said. “Not having to hit fourth and drive everyone in and feel pressure to hit the ball out of the yard. I just have to get on base for the other guys.”

Dillard’s success was not matched by the eight hitters behind him. The Ole Miss offense mustered just five hits and was 1-for-12 with runners in scoring position. Trailing 4-3 in the eighth inning, Ole Miss squandered a two-on, no outs situation. Ryan Olenek reached on an error and Cooper Johnson was pegged in the head with a Jacob Kostyshock fastball. Johnson remained in the game and Bianco said afterward that Johnson appears to be okay.

Bianco opting against a bunt. Kevin Graham struck out in an uncompetitive at-bat and Anthony Servideo put a charge into a baseball that died in the large, center field portion of the outfield at Hoover Metropolitan Stadium. With men at the corners and two outs, Arkansas went to left-handed closer Matt Cronin, who is armed with a mid 90s fastball and a devastating slider. Void of competent options against left-handed pitching on the bench at that point in the game, Bianco sent a struggling Chase Cockrell to the plate to face Cronin’s high velocity. Cockrell —who has struck out in 46 percent of his 84 at-bats — was retired in three pitches and recorded his 39th strikeout of the season.

“(Cockrell) has swung it a lot better the last few weeks in batting practice,” Bianco said. “With not a lot of right-handed options on the bench, with Cronin out there I felt Cockrell had the best shot to catch up to him.”

Cronin struck out all four batters he faced as Ole Miss was unable to put a ball in play in the ninth inning. The Rebels stranded nine runners in this game, were 1-for-10 with two outs and 2-for-15 with runners on base. An offense that has scuffled in the month of May has cobbled together just five runs in 18 innings of baseball in Hoover.

“We need to get tougher and believe in ourselves,” Dillard said. “Have to be the guy and want to be the guy. We have to push a runner to third base or want to get that done. We have to want to compete.”

Doug Nikhazy will get the baseball for the Rebels against the Aggies on Thursday.