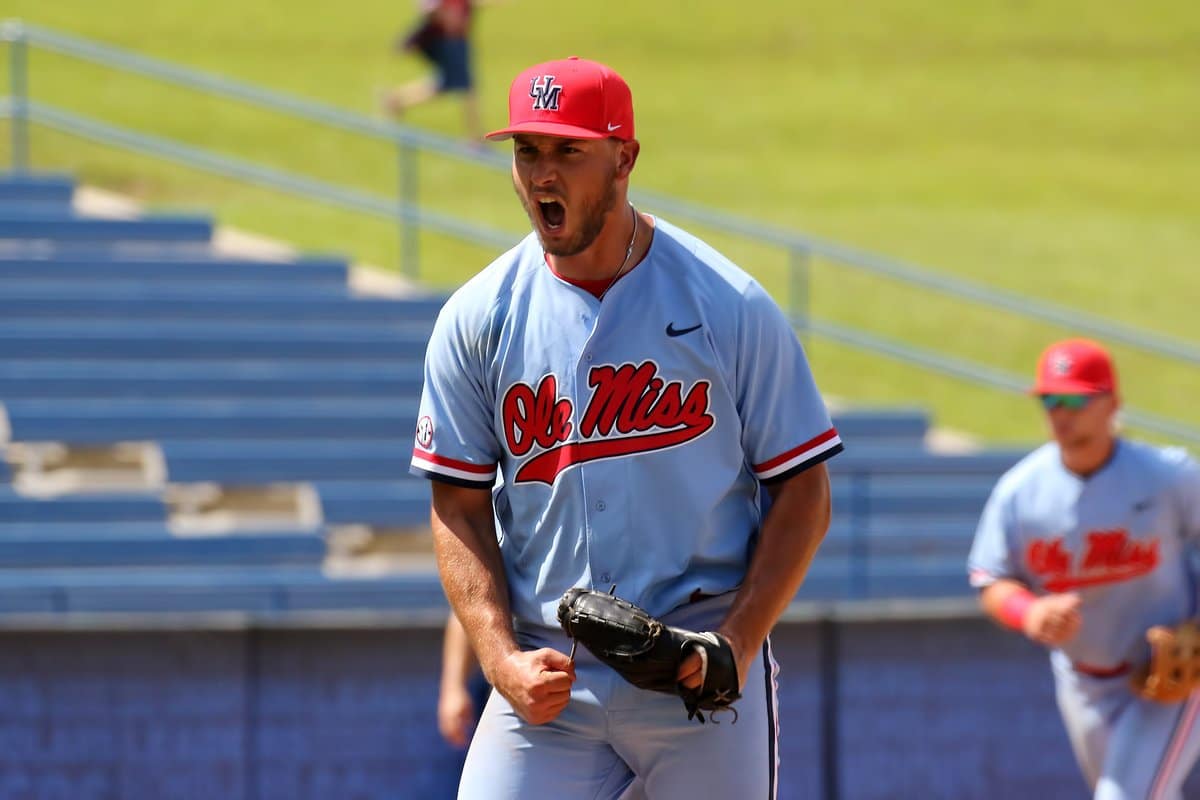 HOOVER — As his team sunk into a season-ending slump, a sometimes stubborn Mike Bianco is trying new things.

Thomas Dillard is hitting in the leadoff spot. Center fielder Ryan Olenek is closing games. Those two things, along with seven innings of brilliant work from Will Ethridge, led to a 2-1 win over Missouri on Tuesday to advance to the double-elimination portion of the SEC Tournament.

As the ninth inning beckoned, Olenek jogged from the bullpen — where he briskly tried to loosen his arm between stints in the field and his slot in the batting order — to the mound, tasked with protecting a 2-1 lead from the Tigers. Olenek closed out a 5-4 win over Tennessee on Saturday that snapped a six-game losing streak to end the regular season, sitting the Volunteers down in order.

This came at a more taxing rate. Olenek put the leadoff hitter aboard with a misplaced slider in a two-strike count that pegged Peter Zimmerman, and put the winning run on first base with a two-out, four pitch walk to Paul Gomez. Olenek stranded both by freezing Thomas Broyles with a breaking ball to end the game.

“I am just trying to throw strikes out there,” Olenek said. “I love being out there getting the opportunity to do it. “

This Olenek situation is far from  traditional and labeling him as the closer of this team is premature. Ole Miss needs Parker Caracci to pitch and pitch well. But having Olenek as an option to supplement a bullpen that has faltered over the last two weeks over the season, is valuable insurance.

The story of this game was the performance Ethridge pieced together. He yielded the lone run, scattered seven hits, struck out six and did not walk a hitter in a 101-pitch, seven-inning gem that carried the Rebels through some early offensive struggles against Missouri starter Konnor Ash, and kept Ole Miss in position to take control of the game, which it eventually did off of Ash’s successor, Jacob Cantleberry.

Missouri’s lone run came on back-to-back two-out doubles in the second inning. Ethridge responded by retiring the next seven hitters and putting five consecutive zeroes on the scoreboard to close the outing. Pitching on short rest, Ethridge delivered arguably his best performance of the season. Ole Miss needed every bit of it.

“Not a better guy for us on the mound than Will Ethridge,” Bianco said. “There are a lot of people that get a lot of credit on our team. One of the guys that is the least talked about and deserves much more credit four our season is Will. He has been tremendous.”

In February, Ethridge was tasked with becoming the face of the Ole Miss rotation and he has answered the call more times than not. He doesn’t come with the notoriety of a Ryan Rolison and there are reasons for that, but he has performed well in a difficult role that involves squaring off against the best pitching the country.

“This is usually when I throw my bullpen, but it was a game,” Ehtridge said. “I just had to keep competing and putting up zeroes.”

Ash exited the game after four scoreless innings and Ole Miss leapt at the vulnerability of his successor, Cantleberry — who is Missouri’s Friday night starter and beat the Rebels back in March with 6.1 innings of one-run baseball. Jacob Adams greeted Cantleberry by shooting the second pitch offered into the left-center gap for a leadoff double. Newly-minted leadoff hitter  Thomas Dillard tied the game by depositing a 3-1 fastball down the left field line for an RBI double. Dillard scored on a Cole Zabowski single up the middle as the Rebels took a 2-1 lead that would hold true thanks to nine-outs from a bullpen that’s struggled to sustain leads of late.

As Ole Miss continued to sink deeper into a losing streak that spanned six games, Bianco began to search for a spark. Dillard was not producing at an optimal level in the heart of the order, but Bianco saw his .440 on-base percentage could be better used elsewhere. Dillard’s plate discipline is immaculate. He has drawn 51 walks this season. Bianco made the move before game two at Tennessee and it has proved fruitful. Dillard has seven hits, two walks and two runs scored in the three games.

“We were getting a little stale there,” Bianco said. “As good as Thomas is, he wasn’t driving in runs in the middle. He walks so much and he doesn’t clog up the bases. He is a good base runner. So thought, if he is going to walk, let’s put him at the top.”

Ehtridge handed the baton to Tyler Myers to begin the eighth. Myers — who has now pieced together five scoreless outings in a row and has now allowed a run since May 3 at LSU — struck out the side in the eighth inning and Olenek escaped a slippery situation in the ninth.

Bianco is trying different things to bolster a struggling bullpen and awaken a slumbering offense. The Rebels have won back-to-back games and the uncharacteristic moves are having a direct effect on the end result. Dillard has sparked the top of the lineup. Olenek has saved back-to-back games.

Ole Miss is pretty firmly locked in as a two seed, barring a run in this tournament that extends to Saturday or Sunday. But this week provides an opportunity for this team to rectify some of its ailments before the NCAA Tournament begins. The Rebels still have bullpen deficiencies, most notably the struggles of Caracci, who will pitch tomorrow in some capacity, Bianco said. But the Rebels are working on remedying these short-comings and Bianco, to his credit, is using unorthodox methods to do so.

Zack Phillips will get the baseball as the team faces Arkansas on Wednesday. First pitch is set for 1 P.M.

“For us, we have to continue to evaluate,” Bianco said. “We need all of those pieces to get through a regional.”