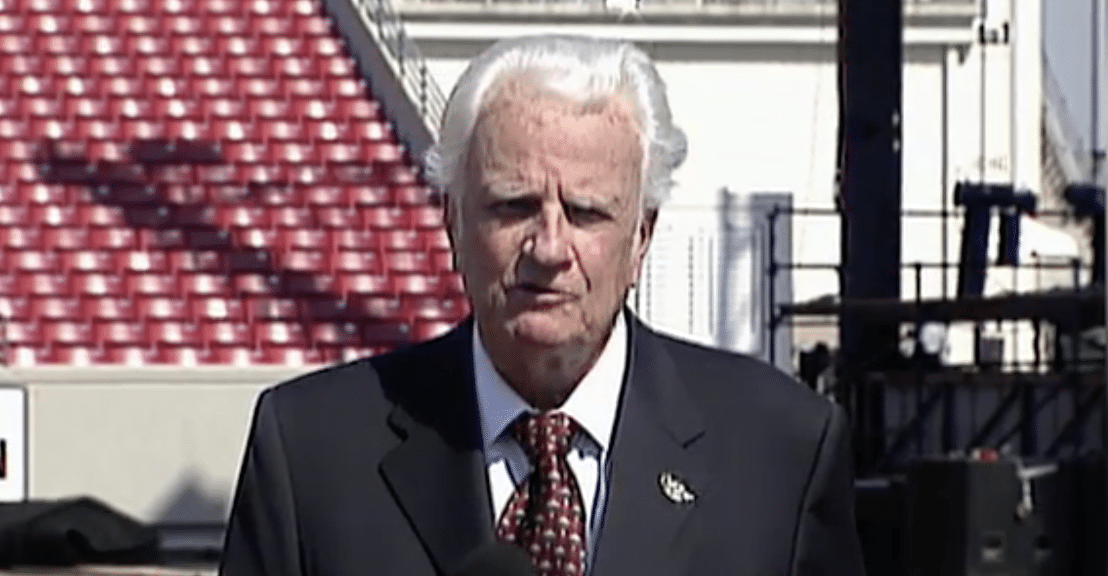 Rev. Billy Graham has passed away at the age of 99 at his home in North Carolina. The legendary Christian evangelist who reached billions of people around the globe had been in ill health for a number of years.

He advised decades of U.S. presidents and was regularly listed in polls as one of the “Ten Most Admired Men in the World.”

“Deborah and I are saddened by the passing of the great Billy Graham,” said Governor Bryant. “Many of us grew up with his crusades playing a big part in our lives. The wonderful hymn “Just as I am,” offered during the invitation, moved millions to a new spiritual life. He now walks the streets of Glory with our savior. We were so honored to meet Rev. Graham’s son, Franklin, two years ago at the Capitol, as he sought a new awakening in a tour across America. Franklin carries on in his father’s footsteps.”

Rev. Graham’s Christian crusades took him from the frenzy of Manhattan to isolated African villages and according to the Billy Graham Evangelistic Association website, he preached to more people in live audiences than anyone else in history.

“I saw a magazine cover once that called him Gods greatest salesman, that may be a little bit of a slight, but Billy Graham took the message of Jesus around the world,” said MDA Director Glenn McCullough. ”

McCullough added that the largest attendance of any event in the Bancorp south arena in Tupelo happened in 1997 during a Franklin Graham crusade.

“I think we would be hard-pressed to find a man of our generation that had more of a tremendous impact for the gospel around the world,” said Dr. Lablonc. “Today Dr. Graham, in full measure, is enjoying the full glory of the Gospel he faithfully preached and we can be positive today that he is hearing those wonderful words from Jesus himself, ‘well done my good and faithful servant.'”

U.S. Senator Roger Wicker added his thoughts on Rev. Graham’s passing saying that his remarkable life was spent in service to God and his fellow man.

“His ministry was instrumental in spreading the Gospel to the far corners of the world,” Wicker said. “As the refrain from one of my favorite hymns reminds me, ‘When we all get to heaven what a day of rejoicing that will be when we all see Jesus we’ll sing and shout the victory.’ Today Billy Graham is singing and shouting.”