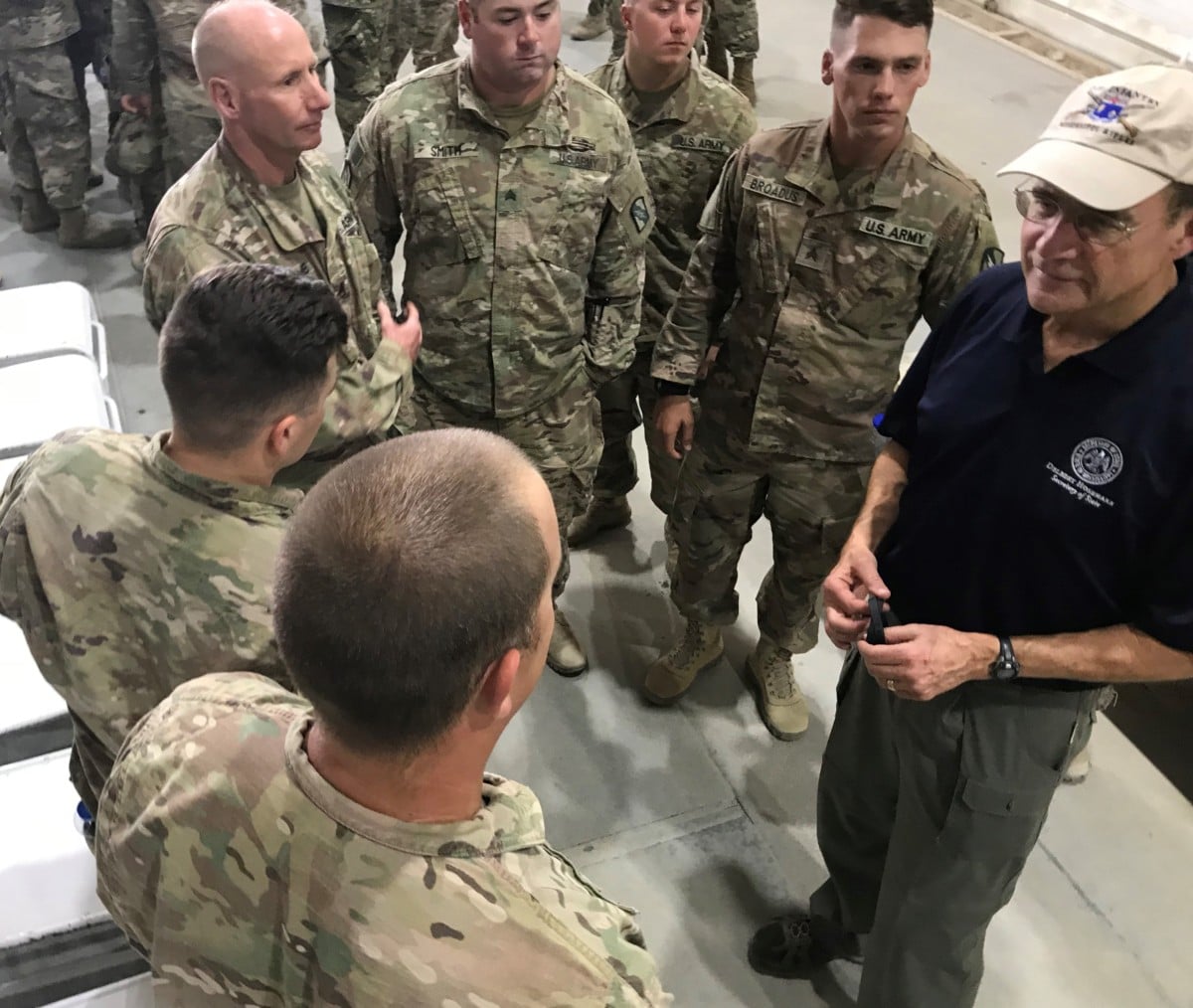 Secretary of State Delbert Hosemann is in Kuwait this week educating soldiers of the 155th Armored Brigade Combat Team on voting in the upcoming election.

During his visit, Secretary Hosemann spoke to roughly 1,500 Mississippi soldiers of the 3,200  who are overseas currently.

“I don’t know of anybody who is more qualified to cast a ballot this year than these fellow Mississippians, over 3,000 of them that are protecting our country,” Hosemann said.

When Mississippians vote in November, they will see a yellow ribbon on each of the precincts displayed to reflect that the soldiers of the 155th won’t be home.

“I told them that they are not in country, but that they are in our thoughts, in our prayers, and in our hearts,” Hosemann said. I know that all of us in Mississippi are looking forward to them coming home next year.”

During his time overseas, Secretary Hosemann was able to use his security clearance to take part in the daily briefings.

“I was able to observe where we are, in what parts of the middle east we are…” Hosemann said. “Our soldiers are probably in 10 different countries over here. They are spread all over doing some unbelievable, sophisticated work. This unit took over for a full-time army unit, one of the few times that ever happens, our people were so qualified that they did that.”

When visiting with the soldiers, Hosemann said he learned that while some of them will be returning to jobs that are waiting for them, many soldiers will be looking for jobs after their year of service. In a survey of 100,000 Mississippi businesses, the Secretary of State’s office found out that the most important thing is an educated workforce, and then the most important thing business leaders need in an employee is integrity and the ability to communicate.

“These people have that times 100,” Hosemann said. “They are in direct communication over literally hundreds and thousands of miles over here. They work as a team together and they have absolute integrity. They will be great employees when they come home next year.”

Secretary Hosemann will be heading back to Mississippi this week, however, the service men and women of the 155th remain. It is for this reason, that Hosemann said he encourages every Mississippian to exercise their right to vote in the November election.

“We told all of them how proud we are of them and the sacrifices that they are making on behalf of us to be able to go and cast a ballot… These men are literally in the desert and all over different countries here, they are casting their ballot electronically and we are excited to have it,” Hosemann said. “There really is no excuse for any Mississippian not to take 10 minutes out of your own life and go cast a ballot. If every Mississippian could come here, talk to these men and women and see what they are doing, and how sophisticated they are, and how important their mission is, they are taking full-time army positions here, I don’t think that one person would skip the ballot in November.”