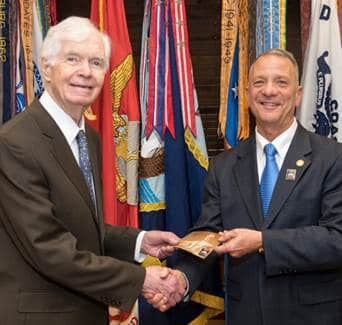 “Veterans Day is a special day to honor the men and women who have served in the Armed Forces.  I am consistently heartened by the outpouring of support expressed by Mississippians across the state to honor all veterans.  We recognize the bravery and sacrifices of service members to protect this great nation and its freedoms throughout our history.

“I commend President Trump and Veterans Affairs Secretary Shulkin for the first-ever designation of November as ‘Veterans and Military Families Month.’  It is an appropriate reminder for us also to honor the families whose support is vital to our servicemen and women.”

Cochran, a Navy veteran, this week received a Veterans Day pin from Assistant Secretary David Loren in recognition of the Senator’s military service.  The pins, authorized by Veterans Affairs Secretary Dr. David Shulkin, were presented to members of Congress who served in the Armed Forces.