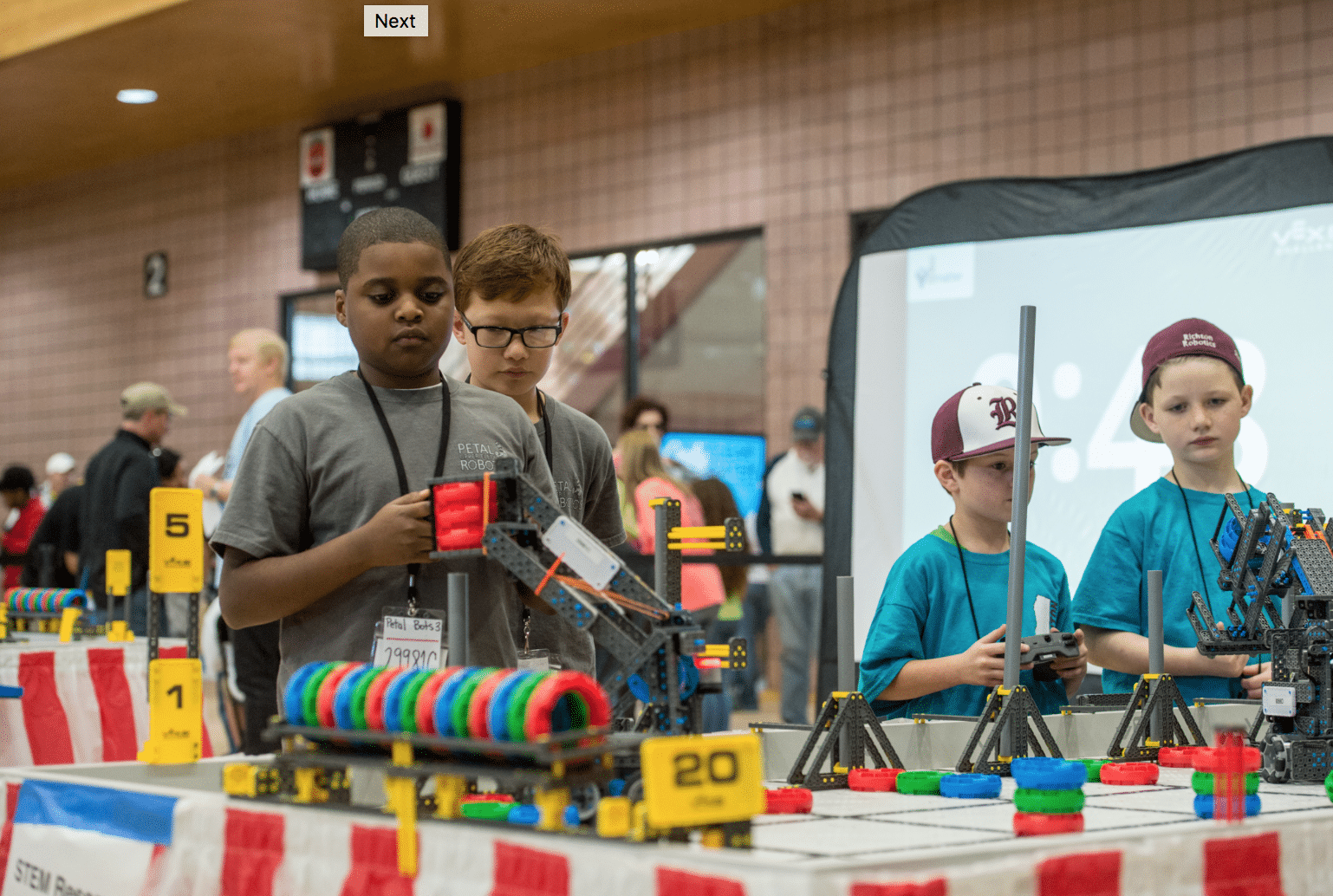 Photo Courtesy of The University of Southern Mississippi

Talented young innovators from all corners of the state demonstrated their creative engineering and coding prowess during the 2018 Mississippi VEX Robotics State Championship held March 2-3 at The University of Southern Mississippi.

A total of 108 teams, comprised of almost 700 competitors, took part in the event. Students in grades 2-12 competed for state titles. Twenty-two teams will now advance to the 2018 VEX World Championship to be held next month in Louisville, Ky.

“VEX Robotics is able to combine STEM (Science, Technology, Engineering, Math) education with a fun, competitive environment that really piques the interest of the students. Their performance in competition shows a higher level of applied knowledge that really engages them and takes them to the next level,” said event coordinator Jennifer Richardson.

Approximately 50 USM student volunteers assisted in the state tournament held at the Payne Center on the University’s Hattiesburg campus. University President Rodney D. Bennett was on hand to welcome the teams as part of the opening ceremony with USM mascot Seymour and the USM Drum Core all energizing the crowd.

“As a public research institution, The University of Southern Mississippi is committed to growing our next generation of creative thinkers,” said Bennett. “We were delighted to host nearly 700 talented young innovators from across the state right here in Hattiesburg for the Mississippi VEX Robotics State Championship. Their excitement was contagious, and I look forward to learning about their future success as they develop ‘big ideas’ that could improve the quality of life for our communities.”

Schools/teams that qualified for the upcoming World championship included the following:

“It felt like a huge family of future scientists from across the state all gathered to share their creations,” said Dr. Gordon Cannon, Vice President for Research at USM. “This competition dovetails beautifully with the new engineering programs at USM and we hope some of the competitors decide to choose Southern Miss for their college training.”

VEX Robotics is a leading provider of educational and competitive robotics products to schools, universities and robotics teams around the world. The group’s VEX IQ and VEX EDR product lines span all levels of education with accessible, scalable, and affordable technology.

“It was an absolute joy watching teachers’ hopeful gazes and encouraging hugs; proud parents taking photos; student teams congratulating each other win-or-lose. This is the good stuff we educators thrive on. We can’t wait to have them back next year,” added Dr. Julie Cwikla, Director of Creativity & Innovation in STEM at USM.

Alex Hillhouse, a seventh grade student at Germantown middle school, attended the competition with his team, the “Mechanical Mavs”.

The team built the robot with a set of instructions as their only guide.

“It was our first year and we decided to build a Clawbot, the first robot that any humans basically built,” said Alex. “It lifts up a cone and drops it on another mobile goal.”

After placing in third place at the semi-finals, they will now prepare for the nationals competition.

“We’ve learned a lot from that competition so we are modifying the robot and making it a lot better for nationals,” said Alex.

He said it has been a good year, and he can’t wait for next year.