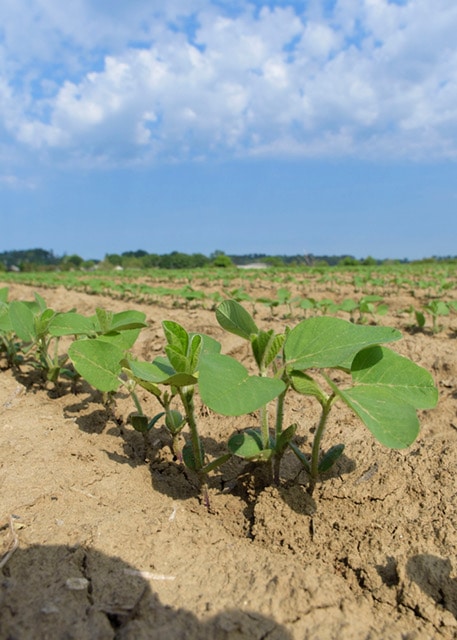 A late frost continued cool temperatures and wet soil slowed soybean emergence and made it difficult in areas to establish a good stand. (Photo by MSU Extension Service/Kevin Hudson)
At about 2.2 million acres, soybeans are easily the state’s biggest row crop with a flexible planting window that puts them in the clean-up position when farmers cannot plant other crops on time.

Trent Irby, a soybean specialist with the Mississippi State University Extension Service, said the crop was about 60 percent planted by early May. This amount was just ahead of the 5-year average pace but behind the early planting seen in 2017.

“We had really favorable planting weather last year in early to mid-April, so we’re pretty far behind when compared to that,” Irby said. “Overall, we’re pushed back a few days compared to other recent years.”

Temperatures and rainfall that kept the soil cool until the end of April hampered planting progress for all crops.

“We planted several acres earlier in the planting season when the ground was dry enough, but in many of those areas, the crop has been slow to emerge because of the cool soil, making it difficult to achieve a full stand,” Irby said.

Even though the weather has warmed, the earliest planted fields have not developed as well as they should at this point.

“As cool and wet as it stayed for so long, we already have a few areas in need of rain, while others remain too wet to plant,” Irby said. “It’s just been a challenging season so far.”

Although earlier planted soybeans tend to yield higher, soybeans may be planted through early July if needed, as the crop can produce even when planted late in the season.

Alex Deason, Extension agent in Sunflower County, said soybeans are by far the biggest crop in the county, with 234,000 acres planted last year and a similar number expected in 2018.

“We’ve had a few issues with some of the soybeans planted in early April catching unusual cool, wet weather with a couple of late frosts. These soybeans exhibited some injury, but they were early enough to bounce back and remain vibrant,” Deason said. “Unlike recent years when we have dealt with widespread flooding of younger beans, we’ve had very little acreage that had to be replanted due to the cool weather injury.”

Producers planted a large portion of the area’s soybean crop in the last days of April and early May before weekend rain halted progress. Deason estimated that more than 80 percent of the soybean acres are planted. The rest should be completed by the middle of May.

“Those who have moved acreage away from corn and cotton will likely put that toward soybeans,” said Deason.

“We are in an environment where margins are tight for most crops, but soybeans are a relatively low-cost crop to produce,” Williams said. “Cost control and risk minimization are incredibly important to producers, and the low cost of producing soybeans means less risk exposure.”

“Soybean ending stocks are at historically high levels, and production likely won’t drop off much this year, so that is limiting how high markets go,” said Williams. “But at the same time, we are seeing soybean demand hit record levels with strong exports and very healthy soybean crush numbers.”

Soybean crush is the process in which soybeans are literally crushed to squeeze the oil from the meal. The oil goes into the food supply or is used to make biodiesel fuel, and the soybean meal is usually used for animal feed.

“The strong demand has tended to limit how low prices go, despite the large ending stocks,” said Williams.