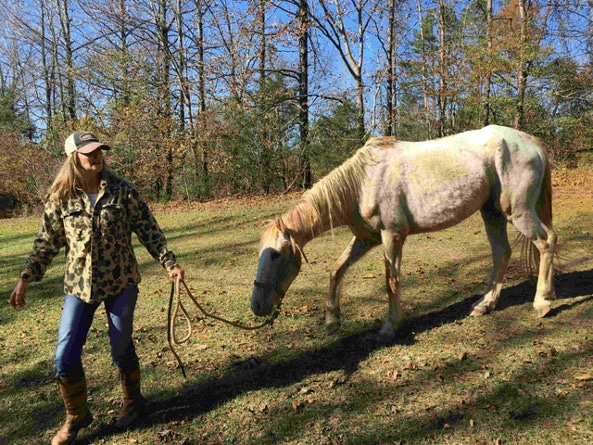 “We found Aladdin and Jeffrey in a deplorable condition, nibbling and blowing at the dust for any morsel of substance they could find,” stated In Defense of Animals campaigner Doll Stanley. “Their ribs and hips were poking out, their hooves split, and one has been blinded by a painful untreated eye infection. They would likely have died if left much longer. We give thanks to Montgomery County Deputy Jim Burton and the Honorable Justice Court Judge Larry Bamberg for their commitment to seeing laws enforced for animals.”

In Defense of Animals was contacted last week to come to the aid of horses Jeffrey and Aladdin who had been abandoned on a property in Duck Hill.

Doll Stanley, who leads the Justice for Animals campaign in Mississippi, worked to get the pair legally forfeited in accordance with Mississippi’s animal cruelty statute.

Mississippi Horses stepped in to accept Aladdin and Jeffrey into its rescue program and transported them to safety on Thanksgiving Eve.

“Watching Jeffrey, blind and following the footsteps of his guide, Aladdin, both feasting on green grass and small helpings of grain made our Thanksgiving,” said Stephanie Billingsley of Mississippi Horses. “On Thanksgiving Day these horses had much to be grateful for.”

Mississippi Horses has 340 acres of pasture on two properties, one in Carroll County and one in Jackson.

Billingsley said that the horses have been taken to the nonprofit’s Carroll County sanctuary where they will receive care and rehabilitation, before being placed in a loving forever home.

“It is wonderful to be part of a network of Mississippi non-profit animal advocacies that are banding together to rescue and care for animals who would otherwise have no hope,” said Stanley. “This rescue comes in the wake of arrests of dog fighters in Adam and Rankin counties and many other heinous cruelty cases across Mississippi. In Defense of Animals will always seek justice for animals harmed intentionally by psychopaths and sociopaths, but we will also hunt down those who neglect to care for their animals. We are joining with Animal Advocacy Initiative of Mississippi and other leading humane organizations throughout the state to move on the capitol to pass statutes that ensure justice due to animals.”

Stanley added that the In Defense of Animals’ Justice for Animals campaign is working tirelessly to advance the cause for justice and show state legislators that the people of Mississippi are united against senseless and horrific animal abuse and in this case to publicize the fact that Louisiana, Arkansas, and surrounding states have a first offense felony statute for aggravated cruelty, a crime which in Mississippi is a misdemeanor for a first offense.