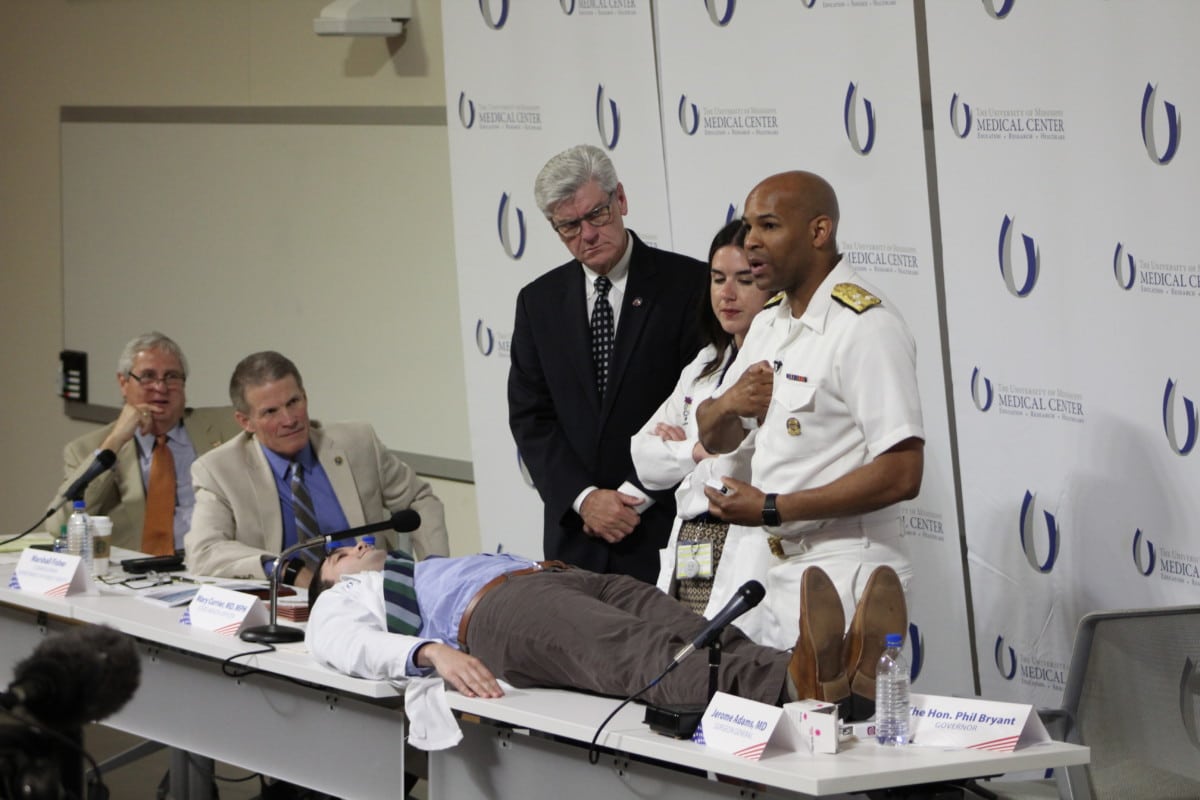 After a heroic flight to Mississippi, U.S. Surgeon General Dr. Jerome Adams spoke at the University of Mississippi Medical Center as Mississippi continues to deal with the effects of the opioids crisis.

Adams highlighted the over-prescribing of opioid drugs as a fundamental issue, not only in Mississippi but across the country. A statistic given by Governor Phil Bryant during a roundtable discussion backed up Adams’ concern in Mississippi.

“64 out of 82 counties had written more prescriptions than they had population. When I was a deputy sheriff, we called that a clue,” Governor Bryant said.

The availability of opioids continues to be a conversation worth having, and this has led to the creation of Governor Bryant’s Opioid Task Force which first convened in 2016. In his remarks, the Governor noted that the public needs to be aware of this shift in drug overdoses and how common they’ve become in local communities.

“These are not people in back alleys with needles in their arms,” he explained. “That’s the idea that we once had of people who were overdosing. These are our neighbors, these are our church members, our children, our husbands and our wives.”

In Mississippi, 43 overdoses have been reversed through the use of Narcan, which has been made available to local law enforcement across the state. Adams spoke of the importance of life-saving remedies for drug overdoses that have now become available to everyone. Naxolene, a form of Narcan, can be bought over-the-counter and comes in a nasal spray and injectable

Adams spoke of the importance of life-saving remedies for drug overdoses that have now become available to everyone. Naxolene, a form of Narcan, can be bought over-the-counter and comes in a nasal spray and an injectable form. During the panel discussion, Adams showed the Governor and the audience how easy it is to administer the remedy to someone who may have overdosed.

“That’s how easy it is for anyone to actually save a life,” Adams said after the demonstration.

With Adams and Governor Bryant on the panel was Commissioner of the Department of Public Safety Marshall Fisher, MSDH State Health Officer Dr. Mary Currier, & Vice Chairman of the Governor’s Opioid Task Force Dr. Randy Easterling. Fisher discussed the importance of collaboration and communication in combatting the opioid crisis.

“I think part of the purpose of this meeting is to encourage not just Mississippi, but all of the US, to establish coalitions to deal with this crisis. Law enforcement, the medical community, the treatment and mental health community did not communicate in the past.

“Stand Up MS” has continued to make strides with outreach programs to educate Mississippians on the dangers of opioids and potential solutions.

“Without education, especially for younger people, people tend to look at prescription drugs in a plastic bottle with a label and a pharmacist’s name and think it’s safer than illicit drugs than you get on the street. The more we talk about it, and the more we make it a public health and public safety issue simultaneously, the better off we’ll be,” Fisher said.

Adams also discussed the importance of bringing the same type of education and relief efforts to rural areas across the state of Mississippi.