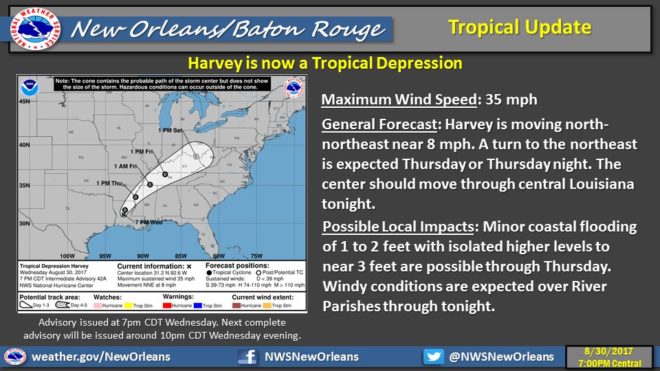 HARVEY finally downgraded to a tropical depression as the storm splits in two over the southeast.

A strong knot remaining over Louisiana this morning continues to dump rain and spark some strong thunderstorms, while a band has kicked out eastward and raking up through Alabama as tornadoes and severe thunderstorms erupt.

The magnolia state seeing relatively little damage compared to our neighbors: reports of a tornado touchdown in the city of Petal yesterday, as well as strong winds on the coast causing damage. A coastal flooding advisory is in effect today.

North Mississippi expecting a stiff dose of heavy weather today as Harvey bends toward Tennessee via Arkansas and north Louisiana. A flash flood watch is still in effect for areas between the Mississippi river and I55, lasting clear thru today and on into Friday.

According to national weather service meteorologists, Harvey will pick up speed and ride north, tracing the Appalachians and moving out of the state by Saturday morning.