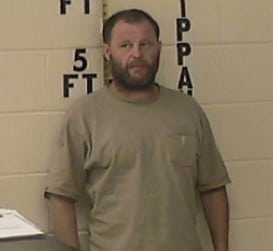 The suspected murderer of a state trooper was beaten in jail.

Attorneys for 43-year-old Troy Anthony Eaton of Rienzi said their client was beaten in the Tippah County jail days after he turned himself in for the shooting which killed an off-duty Trooper.

“He was injured at the hand of the individual who were in the cell with him,” said one of Eaton’s Attorney’s Jamie Franks. “It was clear to me that they intended to cause bodily harm. He had to have a staple or staples above his eye.”

Franks added that Eaton said there was more than one individual who assaulted him and that the individuals who attacked him were speaking to jail officials prior to him being beaten.

Eaton has since been moved to the Marshall County jail for safety. He remains there jailed without bail.

“We are aware of this incident and have been in touch with local authorities to determine if there have been any federal civil rights violations,” said FBI Spokesman Brett Carr. “Because it is an ongoing investigation, we cannot comment further.”

Eaton was charged with one count of Capital Murder and one count of Aggravated Assault for the death of Trooper Josh Smith and the shooting of Rickie Vale.

Franks said that there has been a “multitude of witnesses” who have come forward saying that Eaton was acting in self-defense when he shot at the two men.