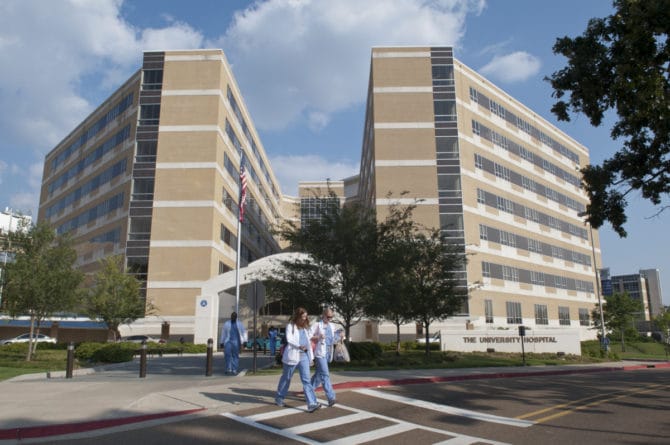 Photo courtesy of the University of Mississippi Medical Center.

The University of Mississippi Medical Center (UMMC) is in negotiations with Blue Cross & Blue Shield of Mississippi (BCBSMS) to work on an updated contract with the insurance provider, with the hopes of a new agreement over the next two months.

UMMC notified Blue Cross management Monday that it will terminate the current agreement on June 30, 2018.

“During the coming weeks, as we continue to negotiate with BCBSMS, absolutely nothing will change for our patients,” said Dr. Charles O’Mara, UMMC associate vice chancellor for clinical affairs.  “We encourage Blue Cross members to continue to visit their UMMC care providers just as they always have. Our goal is to maintain business as usual, so our patients do not experience any disruption in their care.”

Without a new agreement in place by June 30, UMMC will become out-of-network for BCBSMS customers, and those patients may face higher out-of-pocket costs. Normally, exceptions are made for patients who need emergency medical care or established patients who need continuing care for an ongoing illness.

Failure to reach an agreement also would not impact members of the State and School Employees’ Health Insurance Plan and their covered dependents, because that plan is administered by but not offered by BCBSMS.

“We are committed to negotiating with Blue Cross in good faith,” O’Mara said.  “However, it’s important to understand that our current agreement with Blue Cross was developed 28 years ago when UMMC and the healthcare industry were vastly different.  Most troubling, the base contract from 1990 allows Blue Cross to make any changes it wants to the terms of the agreement – including what it pays us for services we deliver to patients – without consulting UMMC.”

UMMC and Blue Cross have gone through similar contract issues in 2013 that were eventually worked out.

“The issue is that the University Medical Center wants to be paid more for some procedures, specifically for things like telemedicine,” said Insurance Commissioner Mike Chaney. “Blue Cross says ‘no, we reserve the right to pay you what market rate would be compared to all of the other hospitals in the area and we are not going to pay any more.’ “I am oversimplifying it, but I want people to understand that it is a dispute about what the reimbursement rate will be.”

Chaney said that if UMMC decides they will not renew their contract with Blue Cross Blue Shield after June 30th, consumers who have Blue Cross insurance and want to go to UMMC will be required to pay network rates. However, by law, the hospital will not be able to send the patient a bill for more money.

“My primary concern in this situation is that patients continue to receive access to quality healthcare without suffering financial penalties,” Chaney said.  “As Commissioner of Insurance, I am prohibited by regulation from acting to mediate or settle disputes between a health carrier and a medical provider arising under a provider contract.  I urge both BCBS and UMMC to work diligently to find common ground prior to the June 30th termination date.  It is my expectation that should the contract actually terminate, BCBS will continue to pay network benefits and UMMC will refrain from balance billing patients until the parties resolve their differences.”

A spokesperson for Governor Phil Bryant said the Governor hopes UMMC and Blue Cross & Blue Shield of Mississippi will be able to work things out.

As the state’s only academic medical center, UMMC offers the only Level I trauma center and children’s hospital in the state, the only organ transplant service, and one of the most extensive telehealth networks in the nation.

“We are committed to a strong, collaborative and fair partnership with Blue Cross and Blue Shield that supports our mission to improve the lives of Mississippians through exceptional patient care, training the next generation of healthcare providers, and engaging in innovative research,” Cook said.  “Through these continuing negotiations, we are optimistic we can reach a new agreement between our organizations.”

Cook said that contrary to criticisms leveled by Blue Cross Blue Shield about UMMC’s costs and quality outcomes, data suggests that UMMC hospitals’ cost structure is among the lowest in the country, according to the Association of American Medical Colleges.  Benchmarked against peer academic medical centers, the hospitals’ adjusted expense per patient day is well below the 25th percentile in recent national rankings.

“We’re one of the best bargains in the country,” said Cook.

Chaney said while the issue is complicated the public will still receive health care.