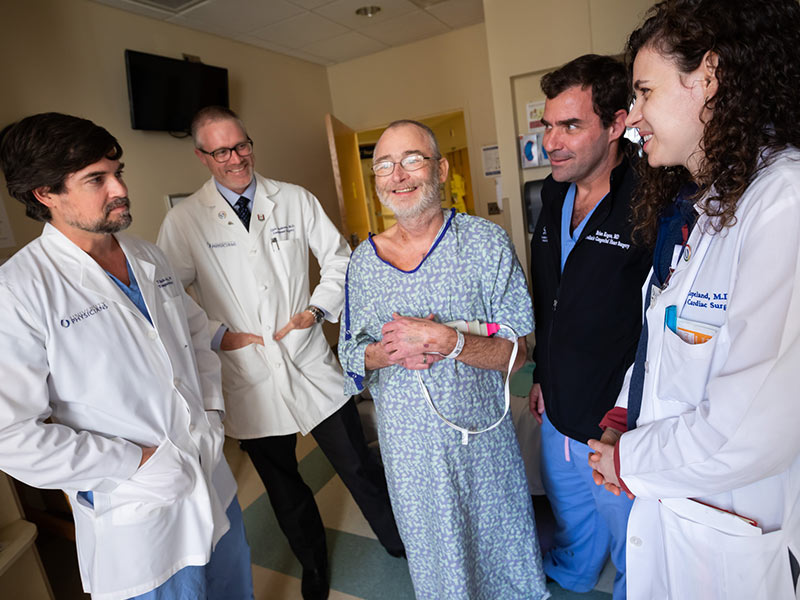 Davis Beasley did not know his heart was on borrowed time until he passed out at work, which happened to be at the oil well he was helping to drill that day.

“They took me to the local ER, and they said I had an irregular heartbeat,” said Beasley, 48, a resident of Millry, Alabama, population 510. “It went from there.”

That was almost a decade ago. On Nov. 15, he made history at the University of Mississippi Medical Center, where a transplant team replaced his damaged heart, which had strained his liver to the point that it, too, was barely functioning.

Minutes after giving him a donor heart, a second transplant team placed a new liver into Beasley’s abdomen, making him the Medical Center’s first combined heart-liver recipient. It’s a rare procedure that the latest data from the United Network for Organ Sharing shows has been completed just 35 other times nationally this year.

“The liver team and the heart team at UMMC had to mature to the point where they felt confident in taking on something like this,” said Anderson, who was recruited to UMMC in August 2011 with a mission: Bring back the liver transplant program following a 20-year hiatus, and build an abdominal transplant team to keep that momentum going.

The surgery also was made possible by a skillful anesthesia team, one for each organ transplanted; a stellar OR support team; and excellent work by the abdominal and heart transplant coordinators and intensive care and nursing support teams, Anderson said. “Our operating room capabilities are at the point where we can do this, and do this well,” he said.

The combined transplant is most often performed on patients with end-stage liver and cardiac failure, or for certain patients who have a genetic condition that can cause heart failure and can be cured with a liver transplant. The two organs almost always come from the same donor. So far this year, just 14 other hospitals have performed one or more simultaneous heart-liver transplants, UNOS says. 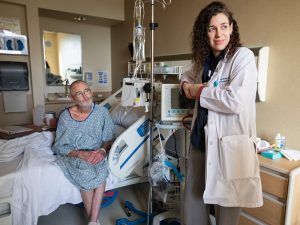 Beasley deteriorated to the point that “his medical options were exhausted,” Kogon said. “The next step is a transplant.”

The dad of two “wasn’t a candidate to have a transplant of either organ without the other,” Anderson said.

Anderson began caring for Beasley more than a year ago for his liver issues. His cardiologists are Dr. Craig Long, associate professor of cardiology, and Dr. Charles Moore, professor of cardiology. “He was being followed for his heart failure at that point, and as it progressed, it became clear that he wouldn’t survive without a transplant of both organs,” Anderson said. “Both transplant teams agreed.”

But first, surgeons had to get him well enough to get through the double transplant. Beasley was in a wheelchair when he saw Copeland a year ago for his heart issues, “and he was completely jaundiced. He was yellow,” she said. “I said, ‘He needs a heart-liver.’”

Copeland, who completed a heart and lung transplant and mechanical circulatory fellowship at Indiana University, said Beasley’s medical team optimized his medications to improve his heart function enough to withstand surgery. Beasley went on the transplant list in spring 2018.

He had no qualms.

“I trusted them,” he said of his surgeons. “I wanted to continue living. I wanted to do what was necessary to save my life. I got to where I couldn’t walk sometimes, or get out of bed. The week before the surgery, it was pretty rough.”

The eight-hour procedure began at 6:30 a.m. The teams worked in tandem to transplant first the heart, and then the liver. “You had two heart surgeons, two liver surgeons, the heart team, the liver team, the anesthesiology team, the nurses and other assistants,” Anderson said. “Each team had some of its residents and students.

“Even in our biggest OR here, it was a tight squeeze,” he said. “But it was very coordinated. We followed the strategy that we all followed at our prior institutions, with the heart transplant going first.

“That transplant is finished, and the patient comes off cardiopulmonary bypass. Then, we proceed to the liver transplant. Once that’s done, the heart team comes back and looks at the chest to make sure there is no bleeding and makes a decision about closing the chest. Then, the liver team comes back.”

The transplanted heart and liver had immediate good function, Anderson said. “The time it took was probably a little quicker than normal for a heart and liver together, but it’s certainly indicative of the smooth operations and coordination by the teams.”

The organs came from the same donor, but it was more important that the heart be suited to the size of Beasley’s chest than the liver be a perfect fit into his abdomen.

“This is a prime example of the positive effect that organ donation can have,” Anderson said. “The difference that one donor can make is huge, and I am always humbled to see patients like Mr. Beasley improve because of this gift of life.”

Almost two weeks after his surgery, Beasley walked – his own choice — from his intensive care room to a bed on the cardiovascular care hospital floor. “It’s getting better every day,” he said of how he feels with his new organs. “I’ve just got to get through all this.”

Beasley has received the directions that all transplant recipients receive in order to steer clear of infection and germs: Avoid crowds and places where large groups gather, like shopping malls or churches. Wash your hands, and ask those around you to wash theirs, too.

“We always tell them to tell people that they can’t hug and kiss on you,” Anderson said. “We never want someone to be locked in their home, or live in a bubble, but we do educate them on the proper processes. We want them to live their lives smartly.”

In June, the transplant teams together performed UMMC’s first heart-kidney transplant, with the organs being transplanted into the same recipient one day apart.

Although 2018 might not surpass 2016 on total transplants, it’s already been the busiest year for livers – 42 through Nov. 21. All told, the Medical Center has transplanted 188 livers since 2013.

The history-making of the heart-liver transplant “is another example of us following up on the vision that Mississippi patients in need of a transplant shouldn’t have to leave the state for expert care,” Anderson said. “I’m glad we reached this milestone. I had no doubt that we would. But, it boils down to the transplant team we’ve built, the transplant coordinators, the OR teams and hospital administration. We have confidence in them.”

For Beasley, the transplant boils down to two people in his life: his daughters.

“They are the real reason I did this,” he said. “I wanted to be there for them. I wanted to show them that I love them.”