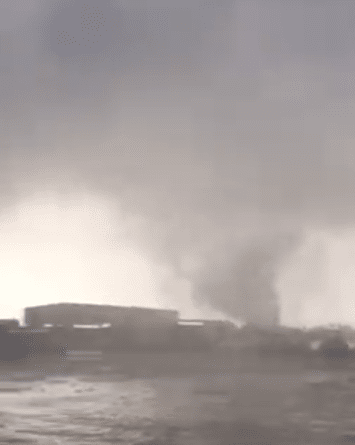 On Sunday after several hours of heavy rain in the coastal counties a water spout was spotted in Jackson County at the Chevron Pascagoula Refinery.

Earl Etheridge, Jackson County Emergency Services Director said that they were notified of the incident through Facebook.

“We were not notified from the company, nobody bothered to call and tell us. We found it on Facebook,” said Etheridge.

Etheridge confirmed that the damage was minimal however one person was injured. A water spout is basically a tornado that is over the water. It is not as strong as a land based tornado.

“We normally don’t get stronger than an EF1 in the southern counties. However, as these storms work their way north, if these thunderstorm cells maintain circulation it is quite possible that they can develop into stronger tornadoes further inland,” said Etheridge.

He said the damage was done to two warehouse buildings on the Chevron Pascagoula Refinery property.

Etheridge said while posting to social media is helpful to inform the public of a weather incident, it should not be the first priority.

You can view the video below, courtesy of Mississippi Gulf Coast:

Pedestrian dead after being hit by drunk driver in Hattiesburg