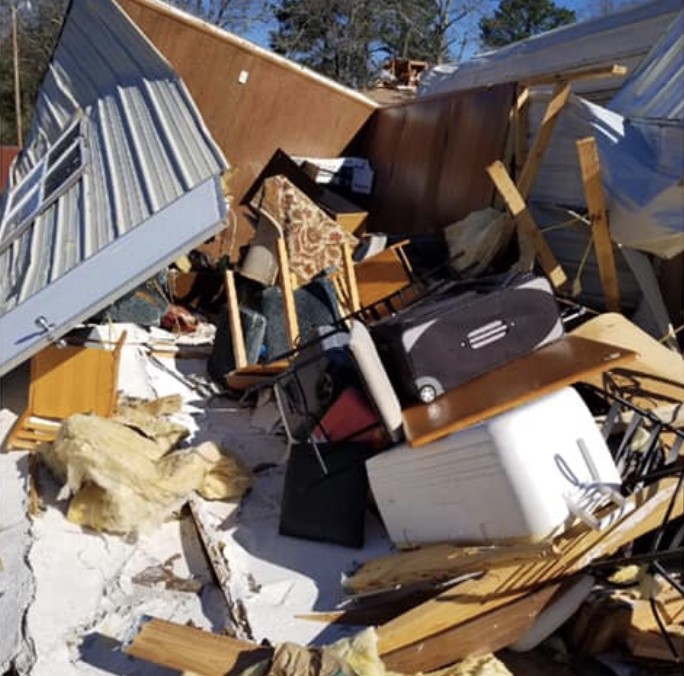 The National Weather Service in Jackson confirmed two tornadoes touched down in Mississippi over the weekend. NWS confirmed an EF-3 tornado touched down in Columbus while an EF-0 tornado caused damage in Artesia.

The Columbus tornado was 10 miles in length and 1/4 of a mile wide. It was on the ground for 16 minutes.

Here is a more detailed look at both the EF0 tornado in Artesia, MS & the EF3 tornado in Columbus, MS, via a Public Information Statement. pic.twitter.com/69JXrcAl0C

Secretary of State Delbert Hosemann visited Columbus the day after the tornadoes tore through the area and said the city and its people need a lot of help as it was very traumatic.

“In the Columbus area, the tornado really just kind of bounced along,” said Hosemann. “It was unusual. It probably had a half a mile or longer chart that it went over, but when we looked at it, it was like it hit one house and then it would bounce up and skip two or three others”

While one woman was killed as a result of injuries sustained during the tornado, Hosemann says it could have been much worse.

“When you see those houses and those buildings that collapsed around them, it is pretty amazing that anybody survived,” Hosemann said. “Some of them were under their desks and a wall fell on the desks to protect them from the next wall that fell down on top of them.

Hosemann added that things were very organized and state assets were mobilized quickly, however, he said he was greatly encouraged by the number of people willing to help with clearing debris and fixing the damages.

“All of a sudden about 11 or 12 o’clock people just started coming from everywhere,” said Hosemann. “They were climbing up on the roofs, nailing down tarps, hauling logs out of the back yards. Stacking debris up on the street and I know that they didn’t know these people. There is no race, color, creed, national origin, or economics that go into these people helping each other. Mississippi is just a big neighborhood and our neighbors were coming out yesterday.”

Hosemann added that if people want to help, they need to sign in with the community center so that they will be sent to the places that need the most immediate assistance.

The Mississippi Emergency Management Agency has received additional damage reports from more than 30 counties due to severe storms and tornadoes on February 23rd, along with flooding that started on February 19th and is still ongoing throughout the state.

MEMA said the damage reports serve only as initial assessments from the county emergency management offices and will change, either higher or lower, as additional reports and assessments are sent to MEMA.

So far, 300 residences, 190 roads and bridges and 30 businesses are affected statewide. The number does not include damage assessments in Lowndes County. Those numbers are yet to be determined.

The public is encouraged to report damage to homes or businesses to their county emergency management office. A directory of all the offices can be found at http://www.msema.org/county-ema/

Rebel Report: Reaction to an eventful weekend in Oxford, does Ole Miss Hoops punch its ticket this week?