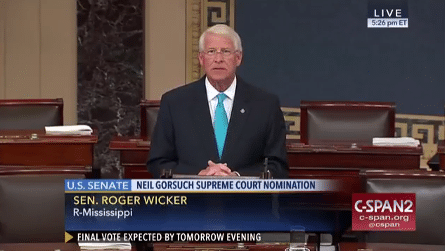 WASHINGTON, D.C.- President Donald Trump recently nominated Judge Neil Gorsuch for the Supreme Court. The nominations was approved by a vote of 54-45.

Among those in favor was U.S. Senator Roger Wicker.

“On the tenth circuit he wrote 800 or so decisions and was only reversed by the Supreme Court one time. I’ll take that record in law, I’ll take it in politics, I’ll take it in any kind of sports,” said Sen. Wicker.

Gorsuch took the Oath of Office for the seat, replacing Justice Antonin Scalia.

“I am confident that history will view Neil Gorsuch to be an outstanding associate justice of the United States Supreme Court,” Wicker said. “I believe that he will be a credit to the Court, to the President who nominated him, and to the Senate that confirmed him.”

Here is a full video of Wicker’s remarks: