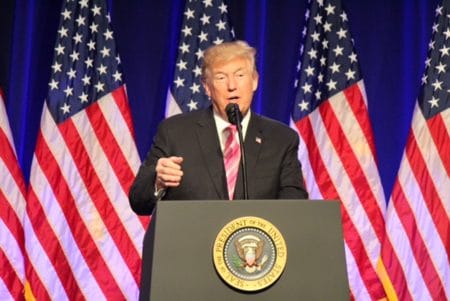 At a White House press conference, President Trump announced that he will be backing the United States out of the “Iran Deal” which was struck in 2015 to attempt to limit the nation’s attempts at creating a nuclear bomb.

According to Fox News, the 2015 pact lifted most U.S. and international sanctions against the country, in exchange for Iran agreeing to restrictions on its nuclear program making it impossible to produce a bomb, along with rigorous inspections – terms generally set for 10-15 years.

President Trump has been highly critical of the deal, and during his presidential campaign, he vowed to either renegotiate or back out of the deal numerous times. During his announcement, Trump continued to say that the deal is bad for the U.S.

“This was a horrible, one-sided deal that should have never ever been made,” he said. “… The Iran deal is defective at its core.”

While some have feared that the end of the deal could lead to dire consequences, Iranian President Hassan Rouhani seems to be willing to work things out with the United States.

“It is possible that we will face some problems for two or three months, but we will pass through this,” Rouhani said, according to Fox.

Mississippi Senators Roger Wicker and Cindy Hyde-Smith released statements in support of President Trump’s decision. Wicker has been an opponent of the deal since the beginning and says that this action will make way for a better deal.

“The nuclear agreement with Iran was always fundamentally flawed and has proven counter-productive to our national security. That is why I voted against the proposal in 2015. Staying in the agreement would have guaranteed Iran the ability to build a nuclear bomb in a few short years. President Trump was right to keep his promise and walk away from this bad deal. We should work with our allies to craft a new agreement that can dampen Iran’s nuclear ambitions, halt its ballistic missile program, and punish this rogue regime for its support of terrorism and other malign activities across the globe.” – Wicker said.

Hyde-Smith echoed Wicker’s comments and said that the deal not only put the U.S. at a disadvantage, but it also posed a threat to Israel.

“President Trump is right to get out of the Iran Nuclear Deal and impose economic sanctions in order to force a more legitimate agreement to fight the threat Iran poses to our interests, our allies, and peace in the region.  The Obama agreement allowed the regime in Tehran to benefit economically, while it maintained a nuclear program, supported global terrorism, and threatened the survival of Israel.

“I commend the President for his bold action.  He has my full support, and I hope his leadership moves the international community to join us to find a better solution that is truly in the best interest of the United States and global security.” – Hyde-Smith said.

Israeli Prime Minister Benjamin Netanyahu recently delivered a presentation claiming that Iran had been lying about their participation in the deal, and Netanyahu expressed his support for Trump’s decision.

Former-President Obama was heavily opposed to Trump’s decision and said that it could give Iran the ability to resume their nuclear program and lead to war in the Middle East.

“Without the [Iran Deal], the United States could eventually be left with a losing choice between a nuclear-armed Iran or another war in the Middle East. We all know the dangers of Iran obtaining a nuclear weapon. It could embolden an already dangerous regime; threaten our friends with destruction; pose unacceptable dangers to America’s own security; and trigger an arms race in the world’s most dangerous region. If the constraints on Iran’s nuclear program under the JCPOA are lost, we could be hastening the day when we are faced with the choice between living with that threat, or going to war to prevent it.” Obama posted to his Facebook page.

The Treasury Department said that a restoration of some sanctions will go into effect after 90 days and more will kick in after 180 days, effectively ending the deal.