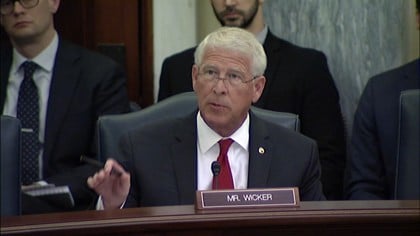 U.S. Senator Roger Wicker attended a hearing of the Senate Subcommittee on Oceans, Atmosphere, Fisheries, and Coast Guard to examine the impacts of crime and other conflicts in global fisheries. During the meeting, Wicker asked Dr. Paul Doremus of NOAA’s National Marine Fisheries Service to comment on the need for a whole-of-government approach to combat illegal, unreported, and unregulated (IUU) fishing.

“A whole-of-government approach is an essential ingredient of our ability — long-term — to be able to set and best use the institutional capabilities that we have among the federal government agencies as well as with the regional fishery management organizations and our other government partners around the globe in tackling this problem,” Doremus said.

Wicker introduced bipartisan legislation last month that would urge better interagency collaboration and coordination to address IUU fishing, which produces an estimated tens of billions of dollars annually that can be used to fund illicit activities such as weapons, drugs, and human trafficking.

Wicker also asked Doremus about U.S. efforts to curb the illegal fishing activity of Mexican crew boats called lanchas, which operate in U.S. federal waters off the coast of Texas. Lanchas typically carry drugs up from Mexico into Texas and then fish with large driftnets on the boat ride back to Mexico. The proceeds from their illegal fishing activities supplement ongoing cartel operations.

“We believe we are moving in a very positive direction on this problem,” Doremus said. “It will require a sustained effort by all of us.”

Doremus added that the U.S. government has been working with Mexican officials to develop a plan to halt the illegal fishing of these crews, which can capture up to five times the amount of red snapper allowed to be captured by legal fishermen in Mississippi.

If passed, Senator Wicker’s legislation would establish a sub-working group comprised of the State Department, U.S. Coast Guard, and NOAA to focus on the eradication of illegal fishing activities in the Gulf of Mexico.