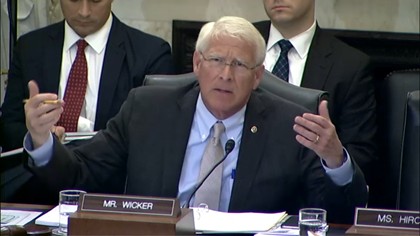 U.S. Senator Roger Wicker spoke to a panel of witnesses on November the 28th during a meeting about the U.S. Navy’s shipbuilding plans. Wicker serves as Chairman of the Senate Seapower Subcommittee and led the hearing which comes amidst growing concerns that the Navy has been lagging in shipbuilding and will not be able to defend U.S. interests without significant additional investments in new vessels.

“Let’s be honest with the American people about how far behind we’ve gotten,” Wicker said.

Wicker asked the panel of witnesses about the Navy’s progress towards meeting its goal of a 355-ship fleet, which became the national policy of the United States when President Donald Trump signed Wicker’s “SHIPS Act” into law last year.

The panel included James Geurts, Assistant Secretary of the Navy for Research, Development, and Acquisition. In his opening statement, Geurts confirmed the Navy is on track to hit the congressionally mandated 355-ship minimum by the 2030s, which is two decades earlier than initially projected.

However, Geurts also noted the need for a bigger fleet has increased and not declined.

Vice Admiral William R. Merz is the Deputy Chief of Naval Operations for Warfare Systems and agreed with the need for a larger fleet saying that a 355 ship fleet is the minimum.

“A 355 ship fleet is not some best case ideal that we would like to achieve if everything goes well,” Wicker said. “The Admirals and Generals came back to us with 655 didn’t they, it was resource challenged and we have to make all of the numbers come out as we don’t have unlimited funds.”

Wicker went on to say that the 655 number was assessed under a scenario where things were dangerous but less so than they are currently.

The Senator also discussed the funding challenges for procuring a new fleet in time to meet emerging threats across the globe. Despite Congress’s recent action to increase appropriations for the Department of Defense, Wicker noted the specter of a flat or declining budget returning in the future. The Budget Control Act (BCA) of 2011, which capped defense spending levels for the better part of a decade, is due to snap back unless Congress takes action next year.

“I view that as unthinkable and it would be irresponsible on the part of this Congress,” Wicker said.

“Obviously, at the BCA level, that significant of a cut would be difficult to imagine us executing the current plan under BCA caps,” Geurts said.

Vice Admiral William R. Merz, who is the Deputy Chief of Naval Operations for Warfare Systems, said that “there would be an immediate impact” if BCA level funding returned.

“Depending on how long [BCA-level funding] lasts, I think we could go from immediate to devastating impact on the program,” Merz said.