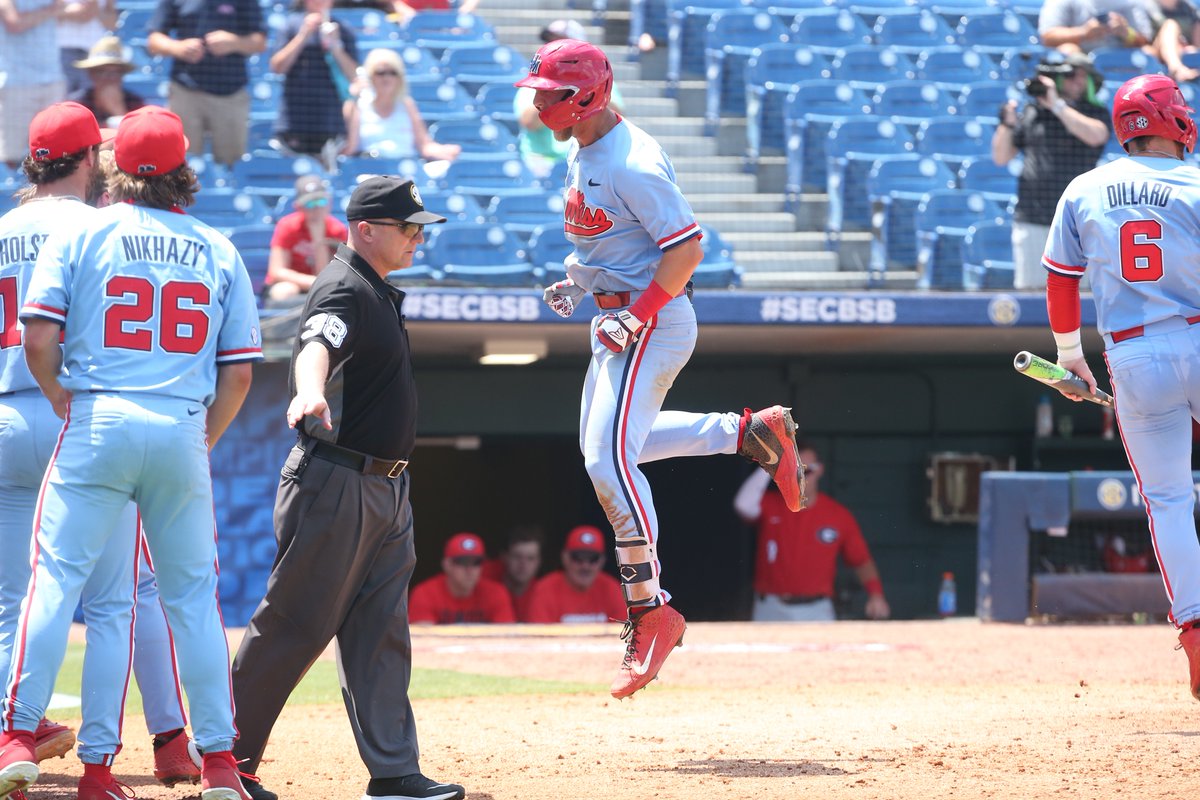 HOOVER — An animated Houston Roth made a beeline from the pitcher’s mound toward the infield dirt as Max Cioffi entered the game from the right field bullpen. He pounded the baseball into Cioffi’s glove, offered a brief message, a slap on the back and disappeared into the dugout.

Roth’s work was done for the day. He’d pieced together an admirable 4.2 innings of three-run ball in just his fourth start of the season and 12th of his career.

“I told him to make good pitches and get outs,” Roth said. “We say all the time: To be the ace you have to match the ace.”

Roth was referring to what this fatigued pitching staff was up against. Georgia ace Emerson Hancock started the game and no. 2 starter Tony Locey relieved hm. Both were on pitch counts as the Bulldogs aimed to set their pitching for the regional they host next week. Both possessed a sub .165 opponent batting averages. Both pumped fastballs in the upper 90s and both will eventually be selected in the first round of the Major League Baseball draft when eligible.

Roth and the bottom portion of the Ole Miss bullpen matched them in a 5-3 win that sent Ole Miss to the SEC Championship game for the second consecutive year. The Rebels are playing their way back into the hosting conversation, and a sputtering and often puzzling ball club appears to be ascending as the postseason nears.

“Against two future Big Leaguers, I thought we really competed and made it hard on Hancock and Locey,” head coach Mike Bianco said. “On the other side of the ball, I thought Houston was tremendous. He gave us everything you wanted in day five of this tournament. Everyone behind him was terrific. I am so proud of our guys.”

Roth pitched an inning of relief earlier in the week and gave Ole Miss all he had left in the tank. His lone mistake came in the second inning when Mason Meadows clobbered a hanging breaking ball over the left field bullpen to give the Bulldogs a 2-0 lead. Two runs felt problematic for an offense that been was stagnant in the four prior games in this tournament. The Rebels have won three games this week in which they scored two, one and three runs respectively. They scored three in a Wednesday loss to Arkansas. Hancock was pumping 96 mph fastballs and 99 a time or two. He mowed Ole Miss down the first time through.

But the Rebels offense awoke to the tune of five runs on 10 hits off Hancock and his successor  Locey, matching their hit total in the three previous games combined. They got a run back in the third when an Anthony Servideo leadoff single turned into a run with the help of some small ball and a productive ground ball from Dillard, and then took a lead in the fourth inning with two more runs. A Kevin Graham RBI single plated Cole Zabowski and was the third of a trio of base hits to begin the inning. A Cooper Johnson ground out plated an Olenek single.

“(Hancock) just really good,” Grae Kessinger said. “I think maybe we were able to get on some pitches the second time through, whether that is us seeing it better or him missing some spots. He is really good and sometimes you have to tip your hat.

“He threw me two really good breaking balls in my first at bat and I got behind in the count. Sometimes you just have to keep fighting.”

Kessinger entered the day with one hit in this tournament. He had three in this game, including two-run shot to left field off Locey in the fifth inning that gave Ole Miss a 5-3 lead after Georgia tied the game. Kessinger led the SEC in hits this season and carried the top of the lineup at times, but sunk into a bit of a slump over the last two weeks of the regular season. It is no coincidence the team’s results mirrored that. This 3-for-4 performance was more reflective of the norm.

The fifth inning home run netted the final runs of the game, in part thanks to 4.1 scoreless inning from an Ole Miss bullpen that was reaching deeper into the barrel than it has at any point this season. Entering the week, this unit appeared to be broken. It endured a nightmarish end of the season, unable to retire batters and regularly surrendered leads. Ole Miss lost six of seven games to end the season and the bullpen was a primary reason for that. That once-broken group has produced 12.1 innings of one-run baseball this week with a 0.73 ERA and a 0.97 WHIP.

This last chunk of production came from some unusual suspects. That is precisely the opportunity this tournament provides, or perhaps forces upon a team as it wades deeper into the week and the sweltering heat. Bullpens are emptied. Seldom-sed arms are thrust into the spotlight. With a hosting bid on the line, Ole Miss won a baseball game starting Houston Roth and using Max Cioffi, Connor Green and Kaleb Hill in relief. The staff was pushed to its limits and did not crumble. This week provided an opportunity for Ole Miss to rectify its bullpen struggles. It has done that seemingly top to bottom.

“Just proud,” Bianco said. “Guys like Cioffi, who hasn’t pitch in a few weeks, to come out and do that against a really good team. Kaleb Hill got two left-handers out. And of course, Parker, to show up on the third consecutive day and finish it off.”

Caracci recorded his third save in as many days. He stranded the tying run on second base in the ninth inning. Caracci stands next to Bianco in the dugout most games, lobbying to be used and never conceding to being unavailable when asked.

“Parker is a Bulldog, man,” Roth said. “He tells coach every day he is ready to go. There has never been a time when he said he cannot pitch. He always wants the ball in his hand.”

Entering the week, Ole Miss was seen as an afterthought in the hosting conversation. The free fall at the end of the season put them in that position. As did a couple of mystifying midweek losses that ballooned the team’s ERA to 22 as of this writing despite 20 SEC wins and 20 quadrant one wins. That is no longer the case as the Rebels have vaulted themselves back into the conversation. The win on Saturday gave this group a legitimate case. The RPI is still an issue, but a more detailed look shows a strong resume.

I spoke with Kendall Rogers of D1Baseball after the game. He and the rest of that staff cover the game nationally better than anyone else. Rogers believes that, while Ole Miss certainly has a strong argument to host after toppling presumptive national seeds Arkansas and Georgia back-to-back days, the Rebels need to win the SEC Championship game on Sunday to feel good about their chances. Rogers believes a win would eliminate any doubt. A loss, and they still have a chance but are probably on the outside looking in with regards to a hosting spot.

“I think the win today complicated it,” Bianco said. “There is a lot to like about our team. It is unfortunate we are in this situation. But we did this to ourselves and we have made amends for  a lot of that this week.”

Zack Phillips will get the baseball in the championship game against the winner of Vanderbilt and LSU. Will Ethridge is available in a limited capacity. First pitch is set for 2 P.M. CT.