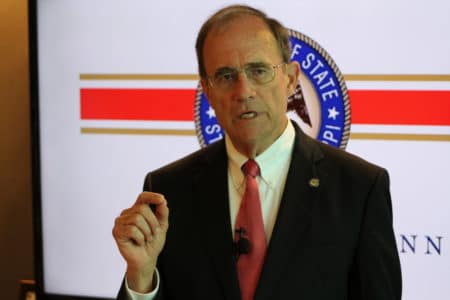 After a historically low turnout during June 5th’s primary elections, a runoff in a couple of key races in Mississippi could see even lower numbers next Tuesday.

Just 13 percent of registered Mississippi voters turned out to cast a ballot a few weeks ago, and runoffs are set for the Republican primary in Mississippi’s Third Congressional District and the Democratic Senate primary. Secretary of State Delbert Hosemann has led the effort to get voters out to the polls, and he says that those who do vote wield an unusual amount of power if the low turnout continues.

“When you got to cast a ballot, you’re also casting 9 others because were virtually running at a 10% voting range,” he said. “So, when you cast your ballot, you cover 9 other people, so you become very important.”

With several thousand Mississippians oversees, Hosemann noted that voting is one of the many rights that our uniformed men and women are fighting for.

“On Primary Election Day, we only had 13 percent of Mississippians turn out to cast a ballot.  Simultaneously, we had more than 3,000 Mississippi National Guardsmen and women deploying to the Middle East to fight for our freedoms,” Hosemann said. “We should honor these soldiers on Tuesday with a better showing at the polls.”

He went on to call the numbers “abysmally” low, and that casting a ballot should be an obligation that Mississippians take seriously.

Just under 65,000 voted in the Republican race for in Mississippi’s Third Congressional District which featured six candidates. The runoff election will be between Madison and Rankin County District Attorney Michael Guest and businessman Whit Hughes. The winner of the Democratic primary in the race was former state representative Michael Evans after he defeated Michael Aycox.

In the statewide primary for Democratic Senate race, around 86,000 voters cast a ballot and the field was also narrowed from six to two. Longtime state representative David Baria and entrepreneur Howard Sherman will await their fate to see who will face off with Senator Wicker in November’s election.

The in-person absentee voting deadline is this Saturday.  Circuit Clerk’s Offices will be open from 8 a.m. to 12 p.m.  The deadline to vote by mail is next Monday, June 25, and Circuit Clerk’s Offices must be in actual receipt of the absentee ballot by 5 p.m.  UOCAVA voters, including servicemembers deployed outside their county of residence, must submit their absentee ballot by 7 p.m. on Election Day.

To find your polling location, visit the Secretary of State’s website at http://www.sos.ms.gov/PollingPlace/Pages/default.aspx.

MSU one win away from CWS Final