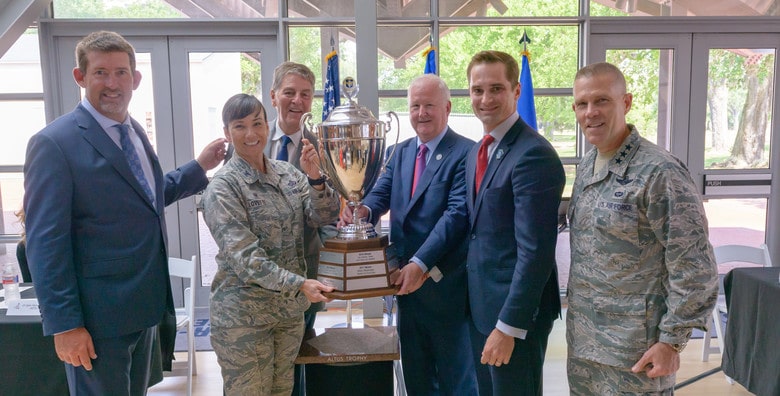 Lt. Gen. Steve Kwast, commander of Air Education and Training Command, presented the 2017 Altus Trophy to the community of Biloxi during the Altus Trophy Celebration, May 18, in Biloxi, Mississippi.

The Biloxi Bay Area Chamber of Commerce was selected as this year’s trophy recipient based on its support and dedication to Keesler Air Force Base.

The Altus Military Affairs Committee, in partnership with the Altus Chamber of Commerce, awards the Altus Trophy to an AETC community who provides the best support to its local military installation. After competitors are considered, a panel of former AETC commanders determines who is the best of the best.

“The committee picks the top three communities and then we send those packages up to be reviewed by former AETC commanders,” said Dr. Joe Leverett, Altus Trophy Committee chairman. “The trophy itself is a cup that sits on a base of granite from the mountains just north of Altus Air Force Base, Oklahoma. That granite symbolizes the rock-solid support the communities give to our military bases.”

This event marks the first time Kwast, Keesler leadership and members of the local community joined together to celebrate the win since it was announced in March.

“The commitment and dedication across the Gulf Coast is apparent every single beautiful Mississippi day,” said Col. Debra A. Lovette, 81st Training Wing commander. “We teach our Airmen what it means to give back, but what they see on the Gulf Coast really teaches them what community means and I thank every one of you for that.”

With two years of hard work of compiling several pages of accomplishments, the Gulf Coast was able to win the Altus Trophy for the first time since its inception nine years ago.

“It’s truly an honor to be here today to accept the 2017 Altus Trophy on behalf Biloxi Bay Area Chamber of Commerce, Keesler, the city of Biloxi and the entire Mississippi Gulf Coast,” said Cree Cantrell, former president of the Biloxi Bay Chamber of Commerce. “This project was a huge group effort. Without the whole team involved we wouldn’t have been able to bring this award home.”

Kwast said Biloxi’s investment into the Keesler community ultimately won them the award.

Examples of those investments included the City of Biloxi partnering with the State of Mississippi and many other local partners, to reach an agreement with Keesler AFB to secure $37 million in funding for the relocation of the main gate and additional infrastructure development. Construction will begin early this year and will be funded in part by a gift from the Mississippi Development Authority.

Medgar Evers home on its way to becoming national monument