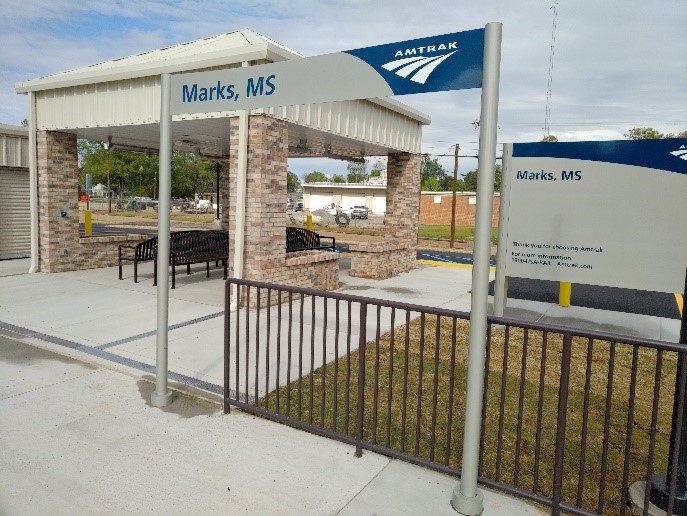 Amtrak City of New Orleans trains will now stop daily at a new station in Marks, Mississippi on the Chicago-New Orleans. The train will stop daily on routes running between Chicago and New Orleans and will help connect travelers to other routes across the country.

The project has been in the making for twenty years and train #58 will sound its whistle at a distance and slowly bring its engine to a stop on the tracks at the new Northwest Regional Amtrak Station at 285 Cherry Street in Marks, Mississippi.

Manuel Killebrew, President of the Quitman County Board of Supervisors said he is optimistic that the new station will revitalize downtown Marks to help increase tourism not only in the northwest corridor but in the state as a whole.

“There are many elected officials and community leaders to thank who lobbied for this regional project that will provide passenger rail service to over 200,000 residents living in the seven surrounding counties,” Killebrew said. “U.S. Senator Roger Wicker and retired U.S. Senator Thad Cochran, along with U.S. Congressman Bennie Thompson were key players along with our state and local representatives.”

The project was funded by a $500,000 grant from the Federal Highway Administration (FHWA) and appropriated through the Mississippi Department of Transportation (MDOT) with a 20 percent local match from Quitman County. The local match was secured by a grant of $150,000 from the Mississippi Development Authority, and a $300,000 grant from Delta Regional Authority was awarded to help fund this project at a cost of nearly $1,200,000.

“After nearly two decades of planning, patience, and perseverance, Marks has many reasons to celebrate this momentous occasion,” said U.S. Senator Roger Wicker. “Travelers, tourists, and residents will now have access to safe, efficient, and cost-effective passenger rail service to this culturally-rich destination along the busy New Orleans to Chicago corridor. I was proud to work with Quitman County, the Mississippi congressional delegation, and our railroad representatives to remove the roadblocks to this project, which I believe will benefit so many Mississippians in this seven-county region.

Northbound Train 58 to Memphis, Carbondale, and Chicago operates in the evening and southbound service by Train 59 to Greenwood, Jackson and New Orleans will take place during morning hours.

“The Marks Amtrak Station provides exciting economic and tourism opportunities for the Mississippi Delta,” said MDOT Commissioner Mike Tagert. “Over 200,000 residents in north Mississippi will have a new transportation option which connects them to all points between New Orleans and Chicago. Visitors and tourists will be able to experience our state’s hospitality, culture and blues music with a station right in the heart of the Delta.”