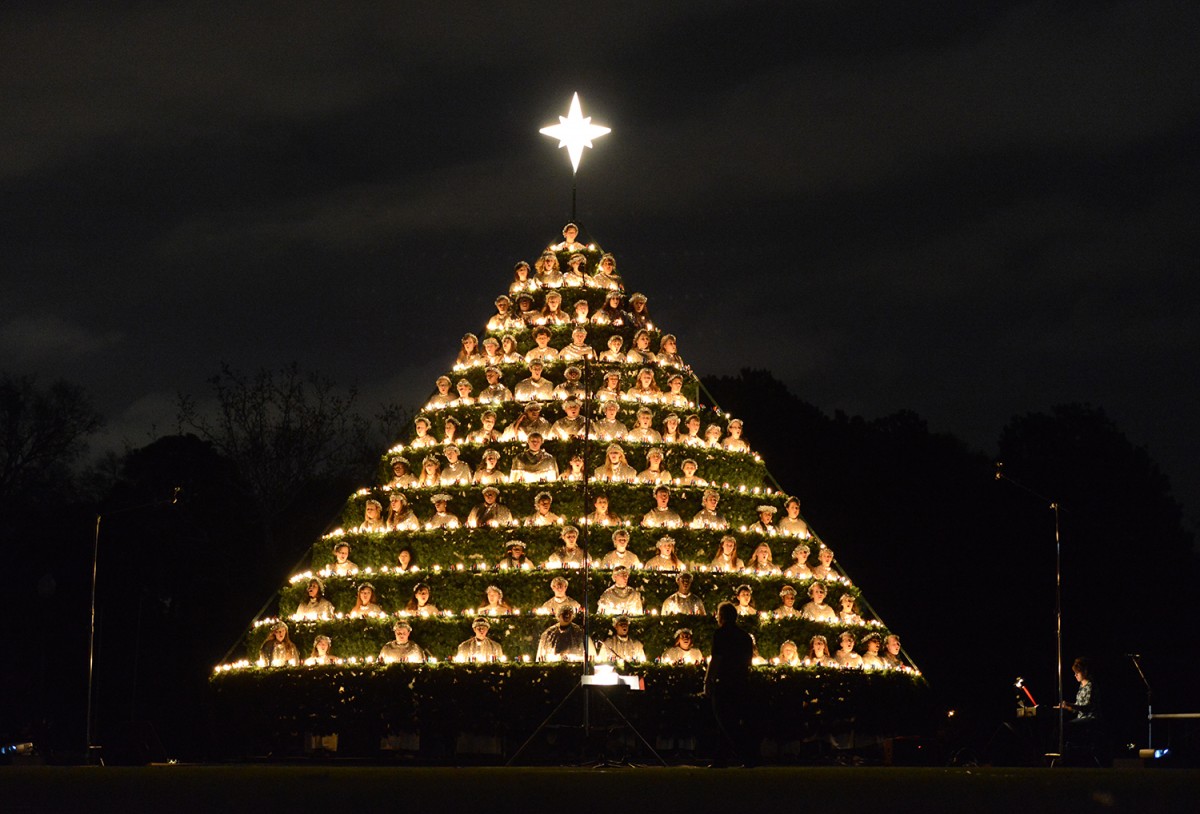 For the past 85 years, Belhaven students have readied their voices and gathered on a 35-foot tall structure to be part of the first and oldest singing Christmas tree in the United States. This year, students will continue that tradition for the 86th performance of Belhaven’s Singing Christmas Tree.

“It’s not often we get the chance to make history,” said Christopher Phillips, specialty instructor and director of the singing Christmas tree. “To be a part of Belhaven’s Singing Christmas Tree is the opportunity to do just that. As the oldest event of its kind in the nation, it’s thrilling and humbling to be a part of this special tradition. We are honored to present this gift to our community this year for the 86th time.”

Since its creation in 1933, the tree frame has grown taller, candles were exchanged for LED lights, voices and music were amplified and more singers were added each year. Today, the wood and metal structure holds over 100 men and women. The LED lights change colors in various patterns and sequences according to the character of each Christmas carol, creating a visual spectacle for listeners.

Both performances on November 30 and December 1 are free to the public and will take place at the Belhaven University Bowl Stadium at 7:30 p.m.

Certain traditions have become expected elements to the tree. An auditioned soloist is positioned under the star located at the very top of the tree.  The soloist performs “O Holy Night” near the Tree’s conclusion.

Other traditions include artificial snowfall during “White Christmas” and humorous “insider jokes” interposed into the lyrics of “Rudolph the Red-Nosed Reindeer” and other Christmas carol favorites.

Mignonne Caldwell, the originator of Belhaven’s tree and music professor, created the event as a way to give back to the surrounding community. Caldwell recruited college engineer Mr. C. V. McLain to construct the first wooden tree frame for the choir to stand on.

Caldwell’s concert idea became a reality and debuted to the public in December 1933. After the success of the first performance, it became a yearly tradition.

Ms. Bettye Quinn, Associate Professor of Education and Director of Elementary Education, has attended the event for 78 years and remembers seeing the tree for the first time.

“I remember when I was three in 1937 and a family friend brought me to see the Belhaven singing Christmas tree,” Quinn said. “At the time the tree was a group of 50 girls on a platform between the columns, they had on white robes and held bright lights that reflected into the lagoon. It was just a glorious sight for a little child to see. I have come every year since to see the Belhaven Singing Christmas Tree.”

Belhaven’s Singing Christmas Tree was named one of the top 20 events in the Southeast by the Southeast Tourism Society, and it continually draws in thousands of people each year.