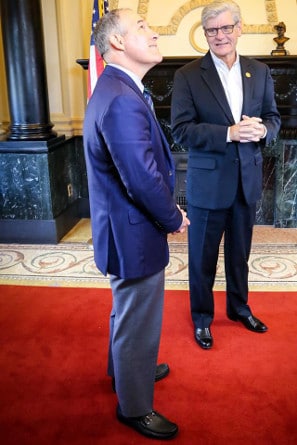 Pruitt is in Mississippi meeting with the governor along with other state agencies to talk about the new regulations which are providing more breathing room for the Mississippi economy.

The primary purpose of Pruitt’s visit is to engage with people who have an interest in the definition of “Waters of the United States” WOTUS as defined by a rule that was promoted by the EPA and the Army Corps of Engineers.

In Mississippi, the interest groups are primarily related to agriculture (including timber growing) and road building, especially the County Boards of Supervisors who maintain roadside ditches in rural areas.

Governor Phil Bryant said that during the Obama Administration, the CPP wanted energy sources to no longer come from coal production, but instead from solar and wind energy.

Pruitt said that when the CPP was telling states across the country how to generate electricity it was not lawful.

Pruitt is making what he calls a “WOTUS Tour” to demonstrate the Administration’s and EPA’s commitment to consulting with local officials and the groups impacted by regulations when developing new rules.

Carbon dioxide (CO2) is the “pollutant” which was being regulated under the CPP and is better defined as the inert gas that all humans and animals expel every day.

Pruitt said that from 2000 – 2014, the U.S. has reduced their carbon footprint by 18% and that other countries should learn from what America is doing so that they too can reduce their CO2 footprint.

The WOTUS Rule defines what procedures are used to identify waters that are and are not covered by the Clean Water Act.

From the 1970s through the 1990s, the majority of federal courts, as well as the agencies, consistently interpreted a broad scope of the Clean Water Act’s jurisdiction which was termed “navigable waters” under Federal jurisdiction.

Supreme Court decisions in 2001 and 2006 held that the scope of navigable waters must be linked more directly to protecting the integrity of waters used for navigation.

The 2015 Clean Water Rule was done in an effort to provide needed clarification and predictability.

Many stakeholders including 27 states, expressed concerns with the 2015 Rule.

Governor Bryant said that Mississippi was among those states, and several organizations, including the Mississippi Farm Bureau, the Delta Council, and the Mississippi Association of Supervisors, who wrote comment letters as the rule was being drafted.

“You could have put anyone out of business,” said Governor Bryant.

The rule was later challenged in court, and the U.S. Court of Appeals for the Sixth Circuit issued a stay.

“The Paris accord, that the President rightly exited with great courage and fortitude earlier this year, was going to reduce the global average surface temperature, all of two-tenths of one-degree Celsius by the year 2100 and we were going to pay billions and billions of dollars to achieve that,” said Pruitt. “It’s so arrogant for Al Gore, or for anyone else in this country to say that they know ideally what the global average surface temperature should be in the year 2100.”

Pruitt said that during the Obama administration, the Clean Power Plan was enacted and farmers across Mississippi were having to go to the EPA before they could use their own land.

“Farmers and ranchers are our first environmentalist,” said Preuitt. “They are our first conservationist. Their greatest asset is their land and for an agency of the federal government to look at them as an adversary as opposed to a partner, is just simply wrong-headed, but that is the agency’s attitude over the last several years. That’s the greatest challenge that we have in this country right now.”

The EPA and the Army Corps of Engineers are now making another effort to provide clarity and predictability in how the WOTUS definition is applied as directed by an Executive Order signed by President Trump on February 28, 2017.

The Executive Order further directs the agencies that they “shall consider interpreting the term ‘navigable waters’” in a manner “consistent with Justice Scalia’s option” in Rapanos.

“We are not just getting rid of the bad regulation,” said Pruitt.

Governor Bryant added that the issue is not relegated to farmers or individuals dealing with energy, it also affects homebuilders.

“The new decisions that are being put in by this administration will save 33 billion dollars,” said Governor Bryant.

“It’s been estimated by the home builders that these types of regulations add $10,000 per home,” said Pruitt. “Now think about that for a second, about how much cost that adds to the home building.”

Governor Bryant added that there are not enough small entrepreneurs in Mississippi, and it’s because of regulations.

“There’s not enough small businesses beginning to sustain America’s economy and the reason, regulation,” said Governor Bryant. “You can’t afford to go. You couldn’t in the past when the EPA might come in and hammer you, when the department of labor might come in behind them, and then the IRS behind them and so this is going to spark, I think, a new Industrial Revolution.”

Multiple Mississippians nominated for IAAF World Athlete of the Year