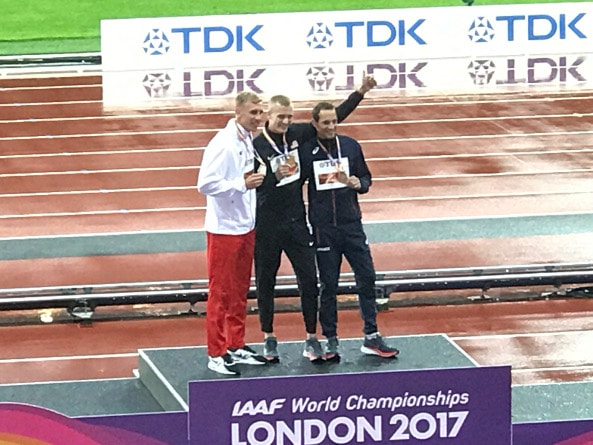 Brittney Reese and Sam Kendricks have a lot in common. Both are from Mississippi, both are track and field athletes, both graduated from Ole Miss, and they have both been nominated for the International Association of Athletics Federations (IAAF) World Athlete of the Year.

Reese is a Gulfport native. At the recent IAAF world championship in London, Reese took home first place for her 7.02-meter-long jump. This was her fourth world title in the long jump. She also produced three of the year’s farthest jumps.

Kendricks is from Oxford, and also made his mark at this year’s IAAF World Championship. Kendricks took home gold in pole vault for his 5.95-meter performance. Kendricks finished the year undefeated in 17 competitions. The 25-year old athlete was surprised by his nomination and knows what elite company he and Reese are in.

“For a number of years, who has been at the top of the list has been people like Usain Bolt and world record holders in the event, and this year it has changed from a track athlete to a field athlete blitz,” Kendricks said.

Before he was competing at the international level, Kendricks was in the ROTC program at Ole Miss and is now a member of the Army Reserve, which he feels has prepared him for competition.

“The Army Reserve has given me a chance to start my career off right. It’s really cool when you can say ‘I did everything I needed to in order to check the boxes at the university level with ROTC.’ I feel really lucky that mission-oriented mindset when I went forward to compete in professional athletics,” Kendricks said. “There’s a lot of crossover between mission training, leadership, troop leading and competing worldwide.”

As a professional athlete, a member of the Army Reserve, and a fiancé, Kendricks has a lot on his plate during this offseason, and he has a lot to look forward to.

“I have a beautiful fiancé, and we are getting married before the 2018 season starts and then I’ll be able to settle into a battle rhythm with my reserve unit as well as travel and compete next year,” Kendricks said. “I hope to progress to even higher heights, cool things like the American record or another Gold medal worldwide if that’s what’s within my sights.”

Kendricks also offered advice to young aspiring athletes, saying that you should try out as many sports as possible while you grow as an athlete.

“Having great crossover is what makes elite athletes,” Kendricks noted. “Go play soccer, go play football, go run track and field, run cross country and you can really understand your body and become the athlete you’re meant to be. Even a not-very-athletic kid from Mississippi like myself can rise to the top of the world if you’re doing the right thing.”

Reese and Kendricks are two of the three Americans nominated for the award. The winner will be announced at the IAAF Athletics Awards 2017 in Monaco on Friday 24 November.

The voting procedure from the IAAF website can be seen below,

A three-way voting process will determine the finalists.

The IAAF Council and the IAAF Family will cast their votes by email, while fans can vote online via the IAAF’s social media platforms. Individual graphics for each nominee have been posted on Facebook and Twitter; a ‘like’ on Facebook or a retweet on Twitter will count as one vote.
The IAAF Council’s vote will count for 50% of the result, while the IAAF Family’s votes and the public votes will each count for 25% of the final result.

The IAAF Council’s vote will count for 50% of the result, while the IAAF Family’s votes and the public votes will each count for 25% of the final result.

Voting closes on 16 October. At the conclusion of the voting process, three men and three women finalists will be announced by the IAAF.

The male and female World Athletes of the Year will be announced live on stage at the IAAF Athletics Awards 2017 in Monaco on Friday 24 November.

The IAAF released the following videos of via Facebook of the nominees: