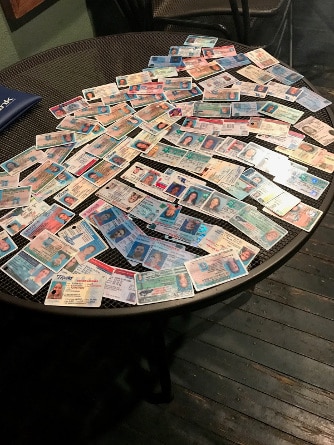 Fake ID’s are more sophisticated and easier to get now than they ever were before, but that means that new technologies and systems have to be invented and implemented.

“A while back I found a poster in our office that was just a piece of poster board that was drawn to look like a drivers license and at that time kids would stand in front of it, take their picture, laminate it and make them a fake ID,” said Rusty Hanna with the Alcohol and Beverage Control Division for Mississippi. “Today they are ordering them online on the internet coming from overseas. They have the UV light on them, they have the holograms, you can run them through a scanner with a magnetic barcode on the back and the information will scan and read out.”

Hanna said that each ID costs anywhere from $80 to $100 but that they get cheaper if they are bought in multiples. So, students often go in together on their fake ID purchases.

He said that in the past year they have come up with a new system to scan for fake ID’s.

“We have an app now on our phones where we can scan the drivers’ license and if we have good internet service, within 30 seconds, we know whether it is good or bad,” said Hanna.

He added that getting caught with a fake ID can cost up to $500 dollars and 30 days in Jail.

However, Hanna said that there’s one thing that student’s don’t think about.

“We get calls periodically from the federal government, military, even private employers who are doing backgrounds on people for jobs and they see where this person was arrested for possession of a fake ID and immediately these companies and governments are thinking identity theft,” said Hanna. “We have to then explain to these people that this was just a young person in college that had a fake ID to get alcohol, but it very well could cost a kid their job somewhere once they get out of college.”

He said that a number of college bars have switched to only allowing individuals 21 and over into the bar and from that the number of fake ID’s have increased.