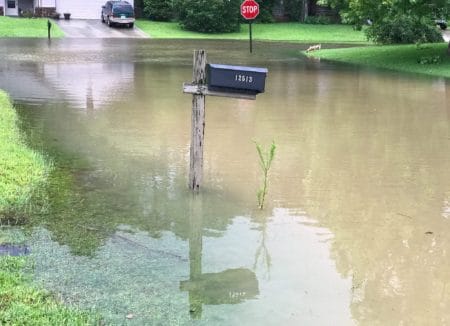 The House has passed a bill to reauthorize the National Flood Insurance Program(NFIP) through November 30th. It passed on a vote of 366-52 and awaits passage in the Senate.

Congressman Steven Palazzo made a statement in support of the legislation, urging his colleagues to avoid a lapse in the program and joined nine other members of Congress in sending a letter of support for the legislation to all members of the House. There are over 65 thousand NFIP policies in Mississippi.

“With the deadline to reauthorize the NFIP being less than one week away, it was crucial to pass this bill that avoids a lapse in the program. A major disruption to the NFIP, in the middle of the Hurricane season, will be detrimental to homeowners in every corner of the United States,” said Congressman Palazzo. “I was glad to see this bill pass and I will continue working to ensure that flood insurance remains affordable and available for my constituents in south Mississippi.”

U.S. Senator Cindy Hyde-Smith also made a statement saying in the middle of hurricane season, the federal government is again days away from allowing the National Flood Insurance Program (NFIP) to lapse.

“Over the past 50 years, the NFIP has reduced flood risks and helped Mississippi families, communities and businesses recover from the financial burdens caused by flooding. Congress needs to act before July 31 to ensure the NFIP doesn’t expire.  Without reauthorization, the NFIP cannot issue new policies or renew existing ones. The National Association of Realtors estimates that a lapse in authorization could jeopardize an estimated 1,300 sales each day or about 40,000 transactions per month.  American businesses and citizens want certainty and predictability.  Lurching from crisis to crisis is inefficient, fiscally irresponsible, and doesn’t serve Mississippians or our nation well. We cannot predict when natural disasters will occur, but we can predict that they consistently will occur. More importantly, we need to act on long-term reauthorization legislation with commonsense reforms that will, among other things, improve flood insurance and address the waste, abuse and mismanagement plaguing the system.  I’ve been working to address this issue in a responsible manner that gets it right. According to FEMA and the Congressional Budget Office, mitigation programs save the American public an estimated $5.2 billion dollars annually.  In addition to its direct monetary benefits to taxpayers, the NFIP provides innumerable public benefits as well.  But the program needs reforms that go beyond short-term reauthorizations. The long-term solvency of the NFIP is critical to protecting taxpayers, communicating flood risk to homeowners and incentivizing communities to invest in mitigation measures.  The challenge is to make NFIP solvent without making flood insurance protection unaffordable for the average family, business or community on our coasts or inland waterways. I’ve heard from Mississippians from the Gulf Coast to the Delta to the Tenn-Tom who are justifiably worried by the prospect of unaffordable flood insurance and continued NFIP uncertainty, which could leave them unprotected or, worse, forced off their property. Flood insurance rates cannot be so high that homeowners or entire communities simply drop out.  Fewer participants hurts solvency and increases the burden on taxpayers to pay for federal disaster assistance to cover uninsured losses.  As we move forward with NFIP reforms, greater emphasis must be placed on solvency and actuarial sustainability. In addition, the current NFIP system is backward, focusing on “response not resiliency.”  Rebuilding communities after a disaster is exorbitantly more expensive than proactively undertaking responsible, cost-effective flood control measures to ease risk and rebuilding costs.  FEMA has found that every dollar spent on mitigation generates at least $4 in future savings, and some major federal flood-control projects have seen a return on investment of approximately 54 to 1. These savings could be increased if FEMA reforms and begins to use accurate, up-to-date elevation information that will let policy holders know the real risk of where they live and how to best decrease that risk. I support free market reforms that make flood insurance more accessible and affordable for Mississippians, which is why I’m a cosponsor of the Flood Insurance Market Parity and Modernization Act.  Thanks to new technology, flood risk mapping, and better data analytics, private insurers are ready and able to reenter the flood insurance market. This legislation would allow states to develop rules and guidelines for private flood insurers to revive a private flood insurance market and lessen dependence on the federal NFIP.  It will create a path for private insurers who already provide flood insurance for commercial enterprises to increase their underwriting for homeowner and small business accounts. Putting private insurers on equal footing with the NFIP will promote competition and bring more choices to consumers. It would allow the private market to thrive and lessen the burden on taxpayers. As Mississippians warily watch the 2018 hurricane season unfold, it is time for Congress to embrace commonsense reforms that both allow for robust input from local communities and improves NFIP solvency. I will continue to work toward the enactment of practical solutions to ensure families, businesses, and communities have access to strong and affordable flood insurance coverage.  Hurricane season and regular flood threats to Mississippi make that goal important.”