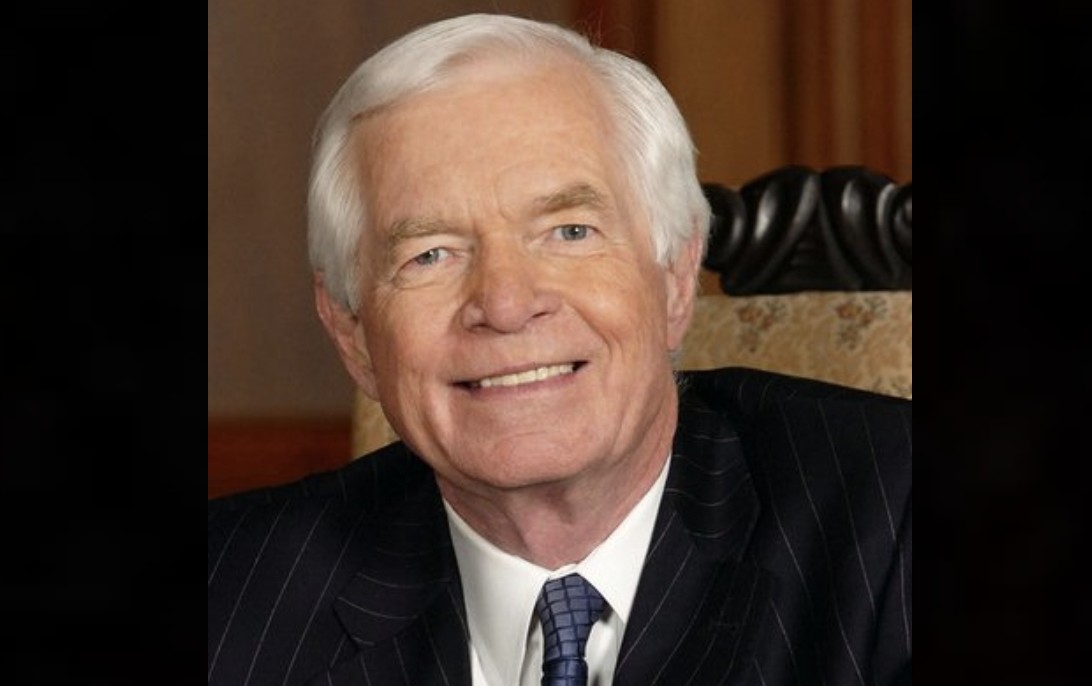 According to a spokesman, U.S. Senator Thad Cochran, who represented Mississippi in Congress for more than 45 years, passed away peacefully early Thursday morning in Oxford.

Cochran, a Navy veteran who eventually served as chairman of the Senate Appropriations Committee and Senate Agriculture Committee, resigned from the Senate in April 2018 due to health concerns.

“Cochran’s family extends its gratitude for the support shown to the Senator by Mississippians over the years,” a statement from his spokesman said.

Cochran was first elected to serve Mississippi’s 4th Congressional District in the House of Representatives in 1972, where he would serve three terms before being elected to the Senate in 1978.

When he was elected to the Senate, Cochran became the first Republican in more than 100 years to win a statewide election in Mississippi. On March 2, 2017, Cochran was recognized as the tenth longest-serving Senator in United States history.

The Navy veteran served as the Chairman of Senate Appropriations and Agriculture Committees, and in 2005, he spearheaded the effort to provide more than $87 billion in supplemental federal assistance to Mississippi and Gulf Coast states devastated by Hurricane Katrina.

As a member of the Defense Appropriations Subcommittee, Cochran worked to ensure that the U.S. Armed Forces remained the best trained and equipped in the world, including support for the Navy’s shipbuilding programs and the military bases and installations in Mississippi.  In 2013, the Secretary of the Navy bestowed on Cochran the Navy Distinguished Public Service Award.

Cochran, a long-time member of the Congressional Sportsmen’s Caucus, authored the ‘Mississippi Wilderness Act’, which was the first federal legislation ever passed for the perpetual protection of lands in the state of Mississippi. Cochran was named “Conservationist of the Year” by several organizations during his career, and the Nature Conservancy honored Cochran with a lifetime achievement award.

In his farewell speech to the Senate, Cochran described his view on government and how each person has the right to be heard.

“All our citizens have the right to be heard and to have a voice in their government. I believe our job as their servants is not to tell others what to think or tell others what to do. Our job is to represent them. I have endeavored to do that the best way I possibly could; and now the time has come for me to pass the power granted by the people of Mississippi, the power of service, to someone else,” he said.

Following Cochran’s retirement, Governor Bryant appointed Cindy Hyde-Smith to serve the remainder of his term. She would then go on to win November’s special election in a runoff.

Reactions to Cochran’s passing are pouring in from Mississippi’s leaders as they reflect on his impact on the state.

“Mississippi and our nation have lost a true statesman in Thad Cochran. He was a legend in the United States Senate where he worked tirelessly to move his state and country forward. He was one of our longest serving senators, and his influence can be felt in every corner of Mississippi. Whether it was fighting for resources during the dark days following Hurricane Katrina on the Coast or being a zealous advocate for farmers in the Delta, he dedicated himself to serving all Mississippians. The Quiet Persuader dominated Mississippi politics for nearly half a century, and he did so by being a gentleman. Senator Cochran has left a legacy of public service that should serve as an inspiration for all Americans. I am requesting that flags be flown at half-staff in Mississippi. Deborah and I are praying for the Cochran family during this difficult time.”- Gov. Phil Bryant

“Very sad to hear the news on the passing of my friend, Senator Thad Cochran. He was a real Senator with incredible values – even flew back to Senate from Mississippi for important Healthcare Vote when he was desperately ill. Thad never let our Country (or me) down!” – President Donald Trump

“Thad Cochran was a giant in the United States Senate and one of the greatest champions Mississippi has ever known. He was also a dear personal friend for decades. My wife, Gayle, and I extend our heartfelt condolences to the Cochran family at this time.

“When Thad Cochran left the Senate, I was reminded of Henry Wadsworth Longfellow, who wrote, “Lives of great men all remind us we can make our lives sublime, and departing leave behind us footprints on the sands of time.”

“Thad Cochran’s footprints are all around us. From his career in the Navy through his retirement in 2018, his life was marked by service to this country.

“The American economy is experiencing historic growth today in no small part because of the foundations laid by Thad Cochran. Our nation’s military is stronger, groundbreaking federal research continues to advance, our citizens are healthier, and rural and agricultural communities from the Mississippi Delta all across this country are more vibrant.

“I am grateful and honored to have known him, learned from him and been his friend. America is a better country because of Thad Cochran.” – Senator Roger Wicker

“Mississippi has suffered a tremendous loss today.  Senator Thad Cochran was an incredible leader and a most respected member of the United States Senate.  My colleagues who served with him consistently speak of him with such high regard.  So many have said to me that he was truly their favorite Senator and friend.  He treated everyone with distinction and had a caring and concerned heart for his constituents and the state he so dearly loved.

Mississippi is a better place because of his leadership that was guided by wisdom and faith.  One of my most cherished moments, which I will hold in my heart forever, is playing God Bless America on the piano while he sang it in his Senate office on his last day there.

My husband Michael and I send our deepest sympathy to his family at this time.” – Senator Cindy Hyde-Smith

“One of Mississippi’s greatest public servants passed today. His life’s work is imprinted on each of us through his leadership in education, agriculture, hurricane relief, and his calm approach to the major issues impacting our State and our Country.” – Sec. of State Delbert Hosemann

“Sen. Cochran was a true statesman and served our state with class and distinction. Lisa and I express our condolences to his family and pray for their comfort during this time of loss.” – Speaker of the House Philip Gunn

“I would like to offer my condolences to the family of former U.S. Senator Thad Cochran. He was an excellent public servant who understood the necessity of diversity and inclusion. Cochran’s talents will be missed by all Mississippians.” – Rep. Bennie Thompson.

Praying for Kay and the entire Cochran family after hearing that our former Senator has passed away. A giant in our state and our country—he will always be remembered and sorely missed. – Lt. Governor Tate Reeves

“Debbie and I are saddened to hear of the passing of Sen. Thad Cochran this morning. He was a true statesman who will be remembered for the tremendous amount of good that he did for Mississippi. Our prayers are with his family. Rest in peace, Senator Cochran.” – Attorney General Jim Hood

“Senator Thad Cochran distinguished himself in service to our nation as a member of the U.S. Navy and as a U.S. Representative and U.S. Senator. He served our great state of Mississippi and exemplified what it means to be a faithful public servant and impactful leader.” – Rep. Trent Kelly

“I am saddened to learn of the passing of Senator Thad Cochran. He devoted his life to serving his state and nation and set the standard of public service that we can all strive towards. He will be remembered for his dedication to the people of Mississippi, and his legacy as a statesman will provide a model of service for our future leaders to follow.

While serving in the U.S. House of Representatives and the U.S. Senate, Senator Cochran was a champion for Mississippi. He worked tirelessly for farmers and to promote rural development. He helped strengthen our Armed Forces as Chairman of the Senate Defense Appropriations Subcommittee, and he spearheaded the effort to appropriate much-needed federal assistance to the Mississippi Coast to address the devastation left by Hurricane Katrina in 2005. Mississippi benefited greatly from Senator Cochran’s leadership as Chairman of the Senate Appropriations Committee and his legislative abilities.  We will continue to enjoy the benefits of his tenure for generations to come.

My prayers are with his family during this difficult time and my thoughts are with our entire state as we remember the life of a great Mississippian.” – Rep. Michael Guest

“Thad Cochran was a statesman that transcended political parties to make an indelible mark on Mississippi. He was highly respected in Washington where he was known as “The Quiet Persuader” who got things done for Mississippi. Rest In Peace, Senator.” – Northern District PSC Commissioner Brandon Presley

“He was the greatest Ambassador for Mississippi that I have ever known and it’s difficult for me to express how much I will miss him. He was the textbook example of a statesman. Senator Cochran inspired me and countless others to be involved in politics. He taught me the importance of working in a bipartisan manner if you wanted to accomplish great things. He was my friend and mentor, and he made me a better member of Congress. I was blessed to have known him.” – Former Rep. Gregg Harper

“My thoughts and prayers are with Senator Cochran’s family and friends, and the multitude of Mississippians who served as part of his extraordinary staff. Senator Cochran served his state and nation with honor and dignity and leaves a legacy of statesmanship and service that will benefit Mississippians for decades to come.” – MS GOP Chairman Lucien Smith

“The passing of Senator Thad Cochran is a great loss to our state and our nation. He was a statesman, a gentleman, and a servant leader. He understood the importance of higher education and was a staunch supporter of the university system in his home state. We are forever grateful for this support, which has left an indelible imprint on our universities, the academic experiences our students enjoy, and the research capabilities that seek to improve the lives of Mississippians on many fronts. This is just one of the many legacies of Senator Cochran’s service that will impact generations to come. We extend our sympathies to the Cochran family. He will be greatly missed.” – Commissioner of Higher Education Alfred Rankins, Jr.