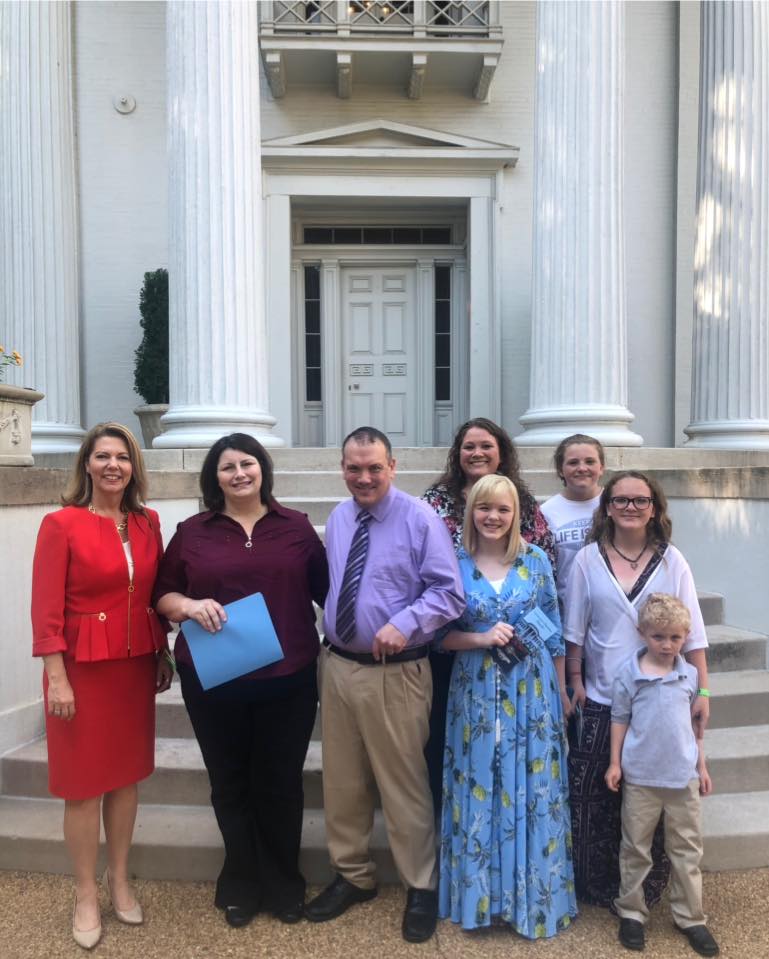 Last week, Senator Sally Doty of Brookhaven presented a proclamation at the Governor’s mansion to Heather Thurgood Wilmoth and her husband Nathan to promote awareness of Huntington’s Disease. Doty said, “This sweet family – and all families battling this terrible disease – need our support and our prayers.”

Heather is a member of our News Mississippi and SuperTalk Network in McComb.  Not many people understand Huntington’s disease or the toll it can take on the victim and family.  What follows is the Wilmoth’s family story as told from Heather’s point of view and written by Matthew Santamaria.

Heather Thurgood Wilmoth never had Huntington’s disease (HD) in her family. This is a fatal genetic disorder that causes the progressive breakdown of nerve cells in the brain. It deteriorates a person’s physical and mental abilities during their prime working years and has no cure.

She would meet Crystal and knew her mom passed away from an illness but didn’t know what she had. A few years later, she started dating Crystal’s brother Nathan and found out more about the illness.

“Their mother burned down two homes due to forgetting that she was cooking,” said Heather. “My sister in law had been born at home during a blizzard because her mother didn’t realize she was in labor. She would visit her mom in the nursing home and her mother couldn’t remember that she had a daughter or how hateful she would be to their dad.”

Her husband decided to get tested because he was tired of being penalized via life insurance for his mom’s diagnosis. 5-10% of at risk patients get tested per year. In his mind, he would have to live with the results and take it one day at a time if he was positive or negative. At least he will have proof knowing one way or the other.

In 2016, he tested positive for HD. His son, Haden, was a little over one at the time and his daughter, Gabrielle, was 10. Heather would then do more research and wanted to get involved in some capacity.

“We both felt like there was a death sentence hanging over our heads at that time,” Heather explains. “Our doctor in Mississippi gave us information for Enroll HD and we both knew that clinical trials was something we wanted to be involved with.”

Enroll-HD is a worldwide observational study for Huntington’s disease families. Heather would also go to the University of Alabama, one of the 47 HDSA Centers of Excellence (COE) in the country. The HDSA Centers of Excellence provides an elite team approach to huntingtin’s disease care and research. The staff has an extensive experience of working with families affected by the disease and work together to help families plan the best HD care program.

“To say going to a [HDSA] Center of Excellence changed our perspectives is an understatement,” Heather explains. “We walked out of that meeting with a whole new outlook and are currently in hopes of becoming involved in one of the trials to help slow the disease.”

Due to the symptoms of the disease, Nathan has to leave his job as a diesel mechanic. The symptoms of Huntington’s disease are described as having ALS, Parkinson’s and Alzheimer’s – simultaneously. This includes personality changes, mood swings, forgetfulness, impaired judgement, involuntary movements, slurred speech, difficulty swallowing, and significant weight loss.

“HD has, in a sense taken over our lives, but we don’t let it control our lives just yet,” said Heather. “Yes, Nathan has cognitive, memory and balance issues. Yes, one of my fears is that people won’t understand what he’s going through and call the police thinking he’s intoxicated.”

Law Enforcement officials can often encounter unusual or dangerous behavior as a result of HD. There have been documented cases of people with HD having difficult interactions with law enforcement because their symptoms are misidentified. To learn more about HDSA’s Law Enforcement Training Guide, click here.

“We don’t let any of that stop us! We know how Blessed we are because we could be so much worse off than what we are right now. We use bad humor to get us by when things get tough.”

Heather is mainly concerned with the memories that Haden will have of his father. Heather has not kept HD a secret from the children.

In her state of Mississippi, the family tries to bring awareness through word of mouth or going on her statewide radio network called Super Talk Mississippi (also known as Telesouth Media).

Nathan and Heather meet with different HD families in a support group setting every other much as well as be active on social media.

“We’ve seen what HD can do, we are doing our best in many ways to try to fight it, whether it be we are lucky enough to get into a clinical trial, or spread the word about HD.”

Huntington’s disease is a fatal genetic disorder that causes the progressive breakdown of nerve cells in the brain. It deteriorates a person’s physical and mental abilities during their prime working years and has no cure. Each child of a parent with HD has a 50/50 chance of inheriting the faulty gene that causes Huntington’s disease. Today, there are approximately 30,000 symptomatic Americans and more than 200,000 at-risk of inheriting the disease. The symptoms of Huntington’s disease are described as having ALS, Parkinson’s and Alzheimer’s – simultaneously.

The Huntington’s Disease Society of America is the premier nonprofit organization dedicated to improving the lives of everyone affected by HD. From community services and education to advocacy and research, HDSA is the world’s leader in providing help for today and hope for tomorrow for people with HD and their families.

​To learn more about Huntington’s disease and the work of the Huntington’s Disease Society of America, visit www.HDSA.org or call 1(800)345-HDSA.