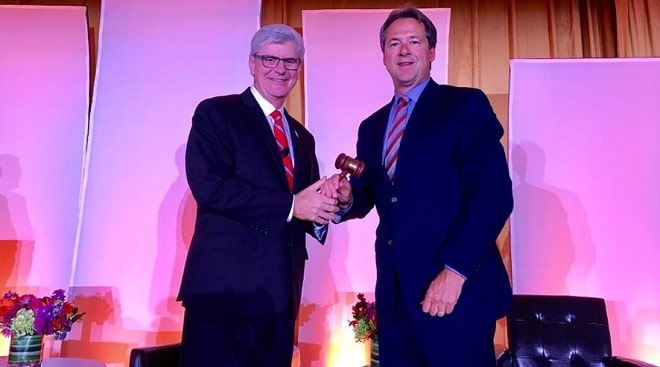 UPDATE June 30, 2017
Governor Phil Bryant took the stage Thursday night in San Diego, California at the National Forum on Education Policy hosted by Education Commission of the States. Governors, education leaders and members of the commission from across the country were in attendance to watch Gov. Bryant receive the gavel as chairman of the national nonprofit that’s focused on improving and strengthening education policy and policymaking at the state level.

At the National Forum on Education Policy hosted by the Education Commission of the States I was honored to receive the gavel from outgoing ECS Chairman Gov. Steve Bullock and begin my ECS chairmanship. I look forward to working with education leaders from across the country.

The chairmanship will not interfere with Governor Bryant’s obligations to the Magnolia State.

December 5, 2016
Back in the United States, Governor Bryant has said there are immense opportunities ahead for him to be involved in the realm of education both nationwide and in the state, and it started with a phone call.

“I saw a blocked number and I answered “Phil Bryant,” and then he said “Donald Trump!” Gov. Bryant said.

He was offered the position of chair of the Education Commission of the States. It was established in the 60’s as part of an effort to revamp education.

“So that every governor would have representation,” said Gov. Bryant. “To help move forward innovative education ideas.”

The new appointment will allow Governor Bryant to continue his work as Governor.

“I’m very, very humbled to be the chair,” he said.

One of the reasons Governor Bryant is excited about this new position is the possibility of funding for the Magnolia state.

“The funding will be under more control of the states,” said the governor. “And the governors will have a deep say so. We say ‘it is your education policy team.'”

Governor Bryant said he’s spoken with the president-elect about working with the future Secretary of Education, Betsy Devos to continue moving education forward. His new responsibilities start in June.

JACKSON, MISS– On December 2, Governor Phil Bryant returned from what he called a “trade mission” trip to Israel.

“This is our third trip to Israel,” said Gov. Bryant. “They are a tremendous business partner of ours.”

Gov. Bryant said Mississippi has provided Israel with support in many ways.

“We look at the trade that we’re doing with Israel—$44 million,” said Gov. Bryant. “Exports are up over 27 percent. The largest increase is in aircraft and spacecraft.”

Israel is in the process of rebuilding their Navy, according to Gov. Bryant, and he said items made in Mississippi are helping with that. Radar systems from Raytheon in Forest are just part of the trade that Mississippi sends to Israel.

Mississippi has sold items to Israel for a multitude of different uses.

“We’re exporting machines.. optical, medical, and surgical equipment,” said Gov. Bryant. “Israel is at war every day they wake up and every night they go to sleep.. and we need to support them.” While trade with Israel is increasing, opening trade with Cuba is an idea that Gov. Bryant said should be approached with caution.

“We have to be careful on where we rush into,” said Governor Bryant.”Cuba is still under communism… more than likely what Cuba believes is we’ll pump billions of dollars..into that country.. and if that’s the deal, I’m out of it.”