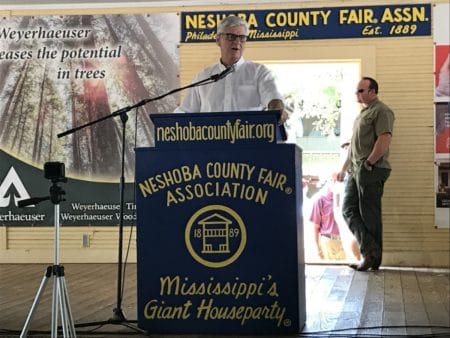 Governor Phil Bryant gave his 21st speech at the Neshoba County Fair this morning. When he discussed his experience as state auditor, he highlighted how proud he is of Mississippi’s newly elected state auditor, Shad White, and how amazing he is doing so far.

He then delivered an uplifting speech on the progress Mississippi has made since he became Governor.

“I had a busy day yesterday. I got to meet with the special agent in charge of Immigration Customs Enforcement, ICE,” said Governor Bryant. “I wanted to meet with him and let him know how we cooperate and how we wanted to make sure our department of public safety was working with homeland security, particularly our ICE agents, to let them know we are on their side as they do their job.”

He said he also got on social media yesterday, which he doesn’t get to do often, to keep up with the fair. He watched speeches made by democrats who made statements about Mississippi being in bad shape and Governor Bryant disagreed with those statements.

He stated how much fun it is being in the White House and much he appreciates what President Trump and Vice President Mike Pence have done for America and Mississippi.

He said one of the democrats got up there and said, ‘those republicans are going to get up here and tell you good things about Mississippi and don’t you believe it, because it’s going to be lies and damn lies.’ Governor Bryant said he thinks the Attorney General regrets making that statement.

He began to cover points about Mississippi’s progress that are true, and gave examples of them.

“Unemployment in the state of Mississippi is 4.7%. That’s historically the lowest levels in Mississippi’s history,” said Governor Bryant.

He stated that is was 9.4% when he first became governor, so this is something he is very proud of.

He said they also have 223,000 men and women that are working with good jobs, that have less than a four year degree.

“If you go to college and you get a bachelors degree in interpretive dance then you’re probably going to have a tough time finding a job,” said Governor Bryant.

He said we’ve got to quit that type of stuff, and we’ve got to teach our children to work, whether they have a high school or college education.

He also talked about tax cuts and how bad the democrats said it was.

“I have cut taxes over 50 times since I’ve been governor, and I’m darn proud of it,” said Governor Bryant. “I was leading the SEC in tax cuts.”

He said we’ve got a $114 billion economy in the state of Mississippi, and he wants to thank President Trump for helping us get there.

“I want to thank him for the tax cuts,” said Governor Bryant. “I love working with this president.”

“He won’t be called out for that, nobody is going to fact check that, but let me give you a few examples,” said Governor Bryant.

“If you can’t see the difference in what occurred on this stage yesterday and what is occurring here today, God bless you. God bless your heart,” said Governor Bryant. “Ladies and gentlemen, we are going to work hard for the state of Mississippi because I’m not going to be second to anybody, and I’m not going to back up from any challenges. Never have, never will.”