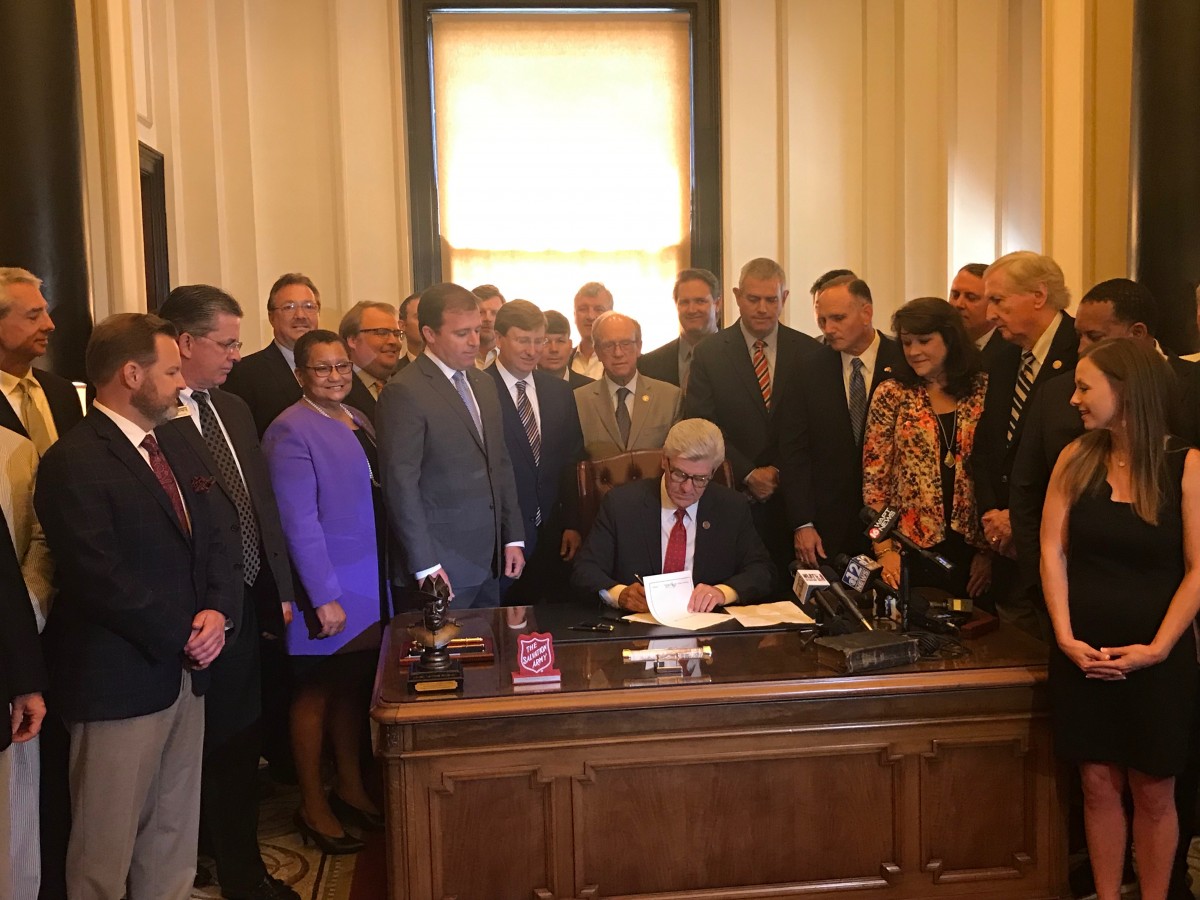 Governor Phil Bryant has signed four conservative reform bills into law. During a series of events at the Capitol on Wednesday, Bryant ceremonially signed the bills into law with various Senators, Representatives, and supporters present. The bills include The Criminal Justice Reform Act, The School Safety Act, The Landowner Protection Act, and The Tourism Protection Act.  All of the bills will go into effect on July 1st, 2019.

The Criminal Justice Reform Act allows for better re-entry options for convicted criminals and will expand drug courts in Mississippi. The bill also allows for more people with nonviolent offenses to apply for a one-time expungement to improve their chances of finding a job upon re-entering the community.

“We did away with the debtors’ prison, so not only would we put you in jail for a non-violent offense, we’d say when you got out, you’d have to pay $5,000. You don’t have $5,000 when you get out of prison, so we just keep you there forever,” Bryant said. “If you had a technical violation on your parole… you were put back in prison. They were common sense decisions made here by this legislature that I think will have a profound effect on all Mississippians that make a mistake, a non-violent offense, someone that’s not a drug dealer, not a child molester, but simply made a mistake when they were young. We are going to give them a second chance.”

“You have to learn to close the door, have to learn how to lock that classroom door, how to cover the window, how to make sure you stay away from windows and take some simple precautions,” said Bryant.

The Landowner Protection Act, was another bill signed ceremoniously and protects property and business owners from lawsuits if a crime is committed on their property. During the session, the bill was not without controversy as some lawmakers worried that the law would create a sense of “immunity” for business owners when it comes to liability.

“This will allow businessmen and women to go about their work of growing their businesses and hiring more Mississippians without the threat of being put out of business by one lawsuit,” Bryant said.

The Tourism Promotion Act will provide a permanent funding source for tourism by building up to and ultimately dedicating 3% of the total revenue collected from restaurant and hotel sales tax revenues statewide for tourism marketing. More than 24 million visitors made their way to Mississippi last year, spending $6.51 billion in communities across the state.

“I am particularly excited about tourism,” said Bryant. “Being able to fund advertisement about Mississippi in the markets all the way to Chicago and Saint Louis. All across the United States, people want to come to Mississippi.”

Presley Wants You! Join the “No Call Force”