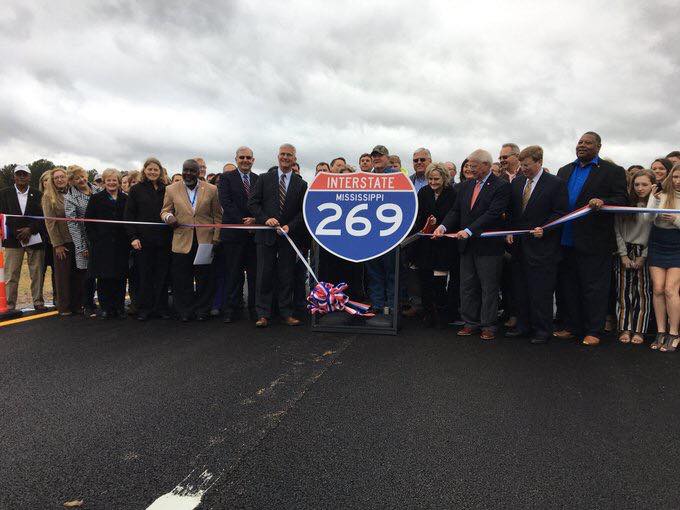 Interstate 269 is now open to commuters in Mississippi. Following a ribbon-cutting ceremony with the Tennessee Department of Transportation for one section of Interstate 269 which has been completed, the road was opened to the trafficking public.

The ceremony took place on Friday at the Mississippi-Tennessee state line.

MDOT Commissioner Mike Tagert said interstate 269 will provide a safer and more efficient way for commercial vehicles to move goods through the region.

Interstate 269 forms a 30-mile loop around Memphis through Mississippi and Tennessee. In Mississippi, Interstate 269 begins at the Interstate 55/69 intersection north of Hernando, cross U.S. Highway 78 near Byhalia and continue northeast to the Tennessee state line.

“It’s a big project for the entire state of Mississippi because it connects multiple interstates which is not something that we are able to, or can afford to do very often here,” Tagert said. “The project was made possible by separate bond funding from many years ago, so it is just now coming to completion.”

The Interstate 269 project is the largest MDOT construction project in the state and many say it will bring new growth and development to the area.

“As growth continues in DeSoto and Marshall Counties, this new interstate will be vital in promoting economic growth and development in the region,” said Tagert.

The completion of I-269 in DeSoto County is the realization of a dream – and many years of hard work. The completed loop will relieve traffic and promote economic growth in North Mississippi. I am so proud to be part of this project and to have participated in today’s event. pic.twitter.com/JVmTnnXiUc

“This is more than just a bypass around Memphis,” said Tagert. “The construction of I-269 will transform the region by connecting local communities in several states and will have far-reaching international implications.”

Tagert added that Tunica’s gaming industry believes the new interstate will improve their business. Gaming numbers have been down in Tunica for several years now.

“Between sports betting and having the new access of the interstate to the Tunica region, that’s definitely going to be significant for them,” Tagert said.