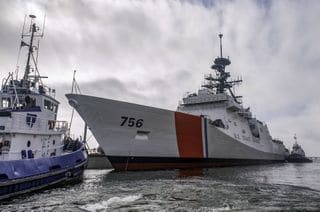 One of Senator Thad Cochran’s final acts as a U.S. Senator was his announcement of appropriations funding that was passed by Congress last year but was put on hold by bureaucrats. Ingalls Shipbuilding division received the $94 million fixed-price contract from the U.S. Coast Guard to purchase long-lead materials for a 10th National Security Cutter (NSC).

“National Security Cutters continue to be extremely important assets for the coastal defense of our homeland,” said Ingalls Shipbuilding President Brian Cuccias. “These ships are enabling the Coast Guard’s missions in not only defending our shores but also in the detection and interdiction of drugs and other contraband. Our shipbuilders in Mississippi look forward to continuing this hot production line and producing additional high-quality, state-of-the-art cutters for the men and women of the Coast Guard.”

The advance procurement funds will be used to purchase major components for NSC 10, such as steel, the main propulsion systems, generators, electrical switchboards and major castings.

“National Security Cutters excel at protecting our homeland because they have proven to be the most effective and advanced security ships in the Coast Guard fleet.  I am pleased these funds will finally be put to work to increase the cutter fleet,” said Senator Cochran.  “I am certain our Mississippi shipbuilders will continue to do excellent work on NSCs 10 and 11.”

The Legend-class NSC is capable of meeting all maritime security mission needs required of the high-endurance cutter. The cutter includes an aft launch and recovery area for two rigid hull inflatable boats and a flight deck to accommodate a range of manned and unmanned rotary wing aircraft. It is the largest and most technologically advanced class of cutter in the U.S. Coast Guard, with robust capabilities for maritime homeland security, law enforcement, marine safety, environmental protection and national defense missions. This class of cutters plays an important role in enhancing the Coast Guard’s operational readiness, capacity, and effectiveness at a time when the demand for their services has never been greater.

“As you know, the Budget and Impoundment Control Act operates on the premise that when the Congress appropriates money to the Executive Branch, the President is required to obligate funds,” Cochran wrote to Gene L. Dodaro, Comptroller General of the United States. “It is my understanding that DHS has completed nearly every step required prior to obligation, but is delaying actual obligation and is in conflict with the law.”

With the signing of the Consolidated Appropriations Act of 2018 at the end of March, Congress provided $1.24 billion for the National Security Cutter (NSC) Program, $1.19 billion above the budget request, to maintain the NSC procurement program. Funding to construct NSC 10 and the procurement of long-lead-time materials and construction of NSC 11 will be awarded in future contracting actions totaling $1.2 billion. Cochran was instrumental in securing the funding.

Additionally, Congress appropriated $26 million, $25 million above the budget request, to accelerate the acquisition program to replace legacy Inland River and Construction Tenders which were commissioned between 1944 and 1990 and have an average age of 52-years-old.

In addition to Coast Guard funding, the bill provided the Department of Defense $23.8 billion for Navy shipbuilding programs, $3.4 billion above the budget request.  In total, the law funds the construction of 14 new ships: one aircraft carrier, two Virginia class submarines, two DDG-51 destroyers, three Littoral Combat Ships, one LXR amphibious warship, one Expeditionary Fast Transport ship, one Expeditionary Sea Base, one TAO fleet oiler, one Towing, Salvage and Rescue ship (ATS), and one T-AGS oceanographic survey ship. The agreement also fully funds advance procurement activities for Ohio class and Virginia class submarines. Other critical shipbuilding investments include an additional $225 million for the expansion of the submarine industrial base and $150 million to accelerate procurement of a Heavy Polar Icebreaker.