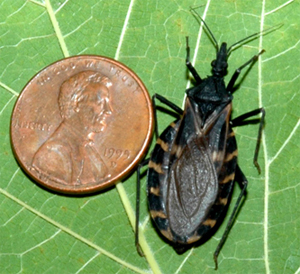 As the months become warmer, you may find a new pest in town.

In addition to mosquitoes, there is a blood-sucking triatomine bug, also known as the ‘kissing bug’, which is making its presence known throughout southern portions of the U.S., including Mississippi. The Centers for Disease Control and Prevention (CDC) warns that the ‘kissing bug’, which mostly attacks humans by biting them in the face, can cause a serious potentially fatal disease.

Although the bite is often painless, the “kissing bug” can spread the Chagas disease in its feces. Officials say the disease can develop into heart disease, including heart failure or stroke. So far, there have been more than 300,000 cases of people in the U.S. infected with the disease. 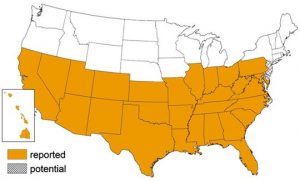 Triatomine bugs can live indoors, in cracks and holes of substandard housing, or in a variety of outdoor settings including the following:

-Beneath porches
-Between rocky structures
-Under cement
-In rock, wood, brush piles, or beneath bark
-In rodent nests or animal burrows
-In outdoor dog houses or kennels
-In chicken coops or houses

Triatomines are mostly active at night and feed on the blood of mammals (including humans), birds, and reptiles.

The CDC advises, If you find a bug you suspect is a triatomine, do not touch or squash it. Place a container on top of the bug, slide the bug inside, and fill it with rubbing alcohol or, if not available, freeze the bug in the container. Take it to your local extension service, health department, or a university laboratory for identification.

Surfaces that have come into contact with the bug should be cleaned with a solution made of 1 part bleach to 9 parts water (or 7 parts ethanol to 3 parts water).