CLEVELAND, Miss.–One of the first U.S. university presidents to visit Cuba after a half-century of nulled economic relations was Dr. William LaForge, president of Delta State. DSU was the only school in Mississippi to send a delegation.

Seventeen universities across the U.S. were included in the trip.

A news release from Delta State details the visit:

“On the heels of President Barack Obama’s recent efforts to reopen negotiations and diplomatic relations with Cuba, Delta State was one of 17 American universities, and the only Mississippi university, to participate in this effort to strengthen relations with Cuba,” said LaForge.

The trip was made possible by the annual Presidential Mission led by the American Association of State Colleges and Universities. Each year, the AASCU organizes a Presidential Mission to a country or region where member presidents and chancellors have opportunities to explore potential linkages with institutions of higher education.

“The second part of this story is that we concluded our meetings with the signing of an agreement between AASCU and the higher education community of Cuba, laying out a format going forward related to program collaboration and student exchanges,” added LaForge. “This is a huge step. Higher education is one of the first industries in the nation to get its nose under the tent, even before full diplomatic relations are restored.”

With the agreement, Delta State, along with the other institutions represented during the weeklong session, will have the opportunity to form international exchanges for students and faculty, both in Cuba and in the U.S. The door has now been opened programmatically.

“This gives us an opportunity to broaden relationships across the academy overall, and more specifically, for our students and faculty to go there, and for them to come here,” said LaForge. “In many respects, Cuba is kind of the last frontier. It’s exciting that when the cloud is finally lifted, we will be among those first in line.”

Attending the program was another step in international relationship building for Delta State, something LaForge has promised will be at the forefront of his agenda.

“Delta State has a role to play in international relations — and this is a great example of that,” said LaForge. “We’re encouraging our students to learn about a global economy. Here we have an opportunity to deal with cutting-edge international changes.”

LaForge added that once the embargo is officially lifted, Cuba would continue to undergo major developments. 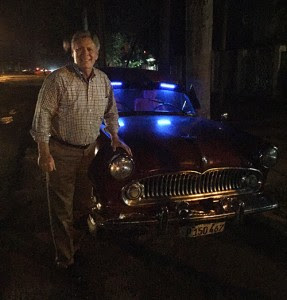 “Old Cuba will morph quickly once the economic embargo has been lifted,” he said. “Stories abound regarding the plight of Cubans from top professionals to those barely able to cobble together a living under the socialistic regime. On a trip across the city one evening, my cab driver revealed that he quit his job as a cardiologist two years ago because he couldn’t earn enough to support his family. He was making roughly $57 a month as a heart surgeon. My round-trip fare in his 1957 French-made, restored, spit-shined Simca was about $46 — the same as the monthly wage of a typical university professor in Cuba.”

Arlene Jackson, associate vice president for Global Initiatives with AASCU, was pleased with the progress made by the American and Cuban leaders.

“In many ways this was a challenging mission,” said Jackson. “However, being the first university presidential delegation to go to Cuba — after the resumption of diplomatic relations — will allow us to begin to implement mutually beneficial academic opportunities. More specifically, we will be positioned to increase student mobility, expand professional development for faculty and promote joint research for both U.S. and Cuban students and faculty.”

AASCU represents more than 400 public state colleges and universities in the U.S. and works as a transformative influence in American public higher education through advocacy, leadership and service.

The Oregon Shooting: Mississippi Flags at Half Staff Until Monday

The Miss. Arts and Entertainment Experience: Ground Broken and Ground-Breaking