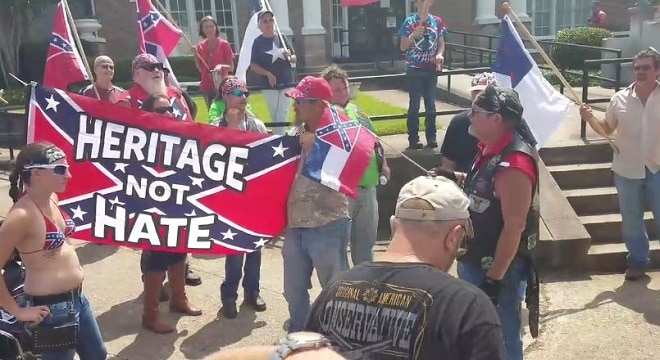 June 19, 2017
McComb Selectman Tommy McKenzie spoke to a crowd of peaceful protesters who gathered in front of McComb City Hall Saturday morning. The group was rallying in response to a vote held the night of Tuesday, June 13 to remove the state flag of Mississippi from government property. That vote did not include the full compliment of selectmen: Michael Cameron and Tommy McKenzie were late to the meeting.

Selectman McKenzie speaks near the 17:30 mark.

“I got ambushed; that’s the way I feel about it” said McKenzie. “The flag may be taken down here, but it’s still the flag of everyone in Mississippi. You cannot take that away. People voted. This is about a precedent being set: that elected officials can take something away from you like that.”

McKenzie recalled the 2001 referendum to change the state flag, in which nearly 500,000 Mississippians voted to keep the current flag.

“We have to respect the vote,” continued McKenzie. “Each one of you have a vote, and then in one fell swoop it was eliminated. The state of Mississippi voted; if you don’t respect votes, that’s a very dangerous path to go down for people.”

Ralliers asked when the next Board of Selectmen meeting will be held. The next scheduled meeting is set for June 27 at 5:30pm.

UPDATE June 17, 2017 11:35am
Ralliers, having felt their voices were heard, left the steps of McComb City Hall around 11am Saturday. The group was protesting the decision of city leadership to remove the state flag of Mississippi
from city property.

UPDATE June 17, 2017 10:30am
Dave Hughes was live at McComb City Hall as flag supporters pulled up for the rally. Protesters plan to be active until today. We’ll have updates throughout the day.

June 16, 2017
There are plans for a “state flag rally” Saturday in McComb. The people interested in participating will be gathering at the west end of Delaware Ave around 9:30 a.m. Saturday, then proceeding east down Delaware beginning at 10 a.m.

The crowd plans to end at City Hall in downtown McComb. The groups goal, to gather in support of the state flag after this week’s vote by the Board of Selectmen to remove the flag from all city-owned property.

The gathering is planned to last until 2pm.

McComb selectmen voted Tuesday night to remove the state flag, but how the vote was carried out is stirring controversy in Pike County.

Two selectmen, Michael Cameron and Tommy McKenzie, were late getting to the meeting. Before they could get there, a motion was made by selectman Donovan Hill to add the flag vote to the agenda.

“The motion has been made to remove all state flags internal and external from all city properties in the city of McComb,” said Mayor Whitney Rawlings.

Another motion was then made by selectman Hill to move the flag vote and a motion to vote on the rebuilding of the Martin Luther King gym to the top of the agenda– placing the vote before the other selectmen could arrive.

“We will not do that, that would be out of order,” said Mayor Rawlings.

“I would like to make a motion to remove the chair,” said selectman Albert Eubanks. The motion was seconded by Hill, and a 3-1 vote of the board overruled the chair and had the flag vote come up next, where it passed.

There’s no word yet as to whether or not a re-vote will be conducted since the two selectmen were not present.

Both measures–removal of the flag and the rebuilding of the gym– had been voted on in previous board meetings, with each vote resulting in a 3-3 tie, with the Mayor voting “nay” to break the ties on both issues.

While a date wasn’t discussed for the removal of the flag at the meeting, it was not flying Wednesday at the police station or city hall.

-Courtney Carter and Dave Hughes contributed to this story