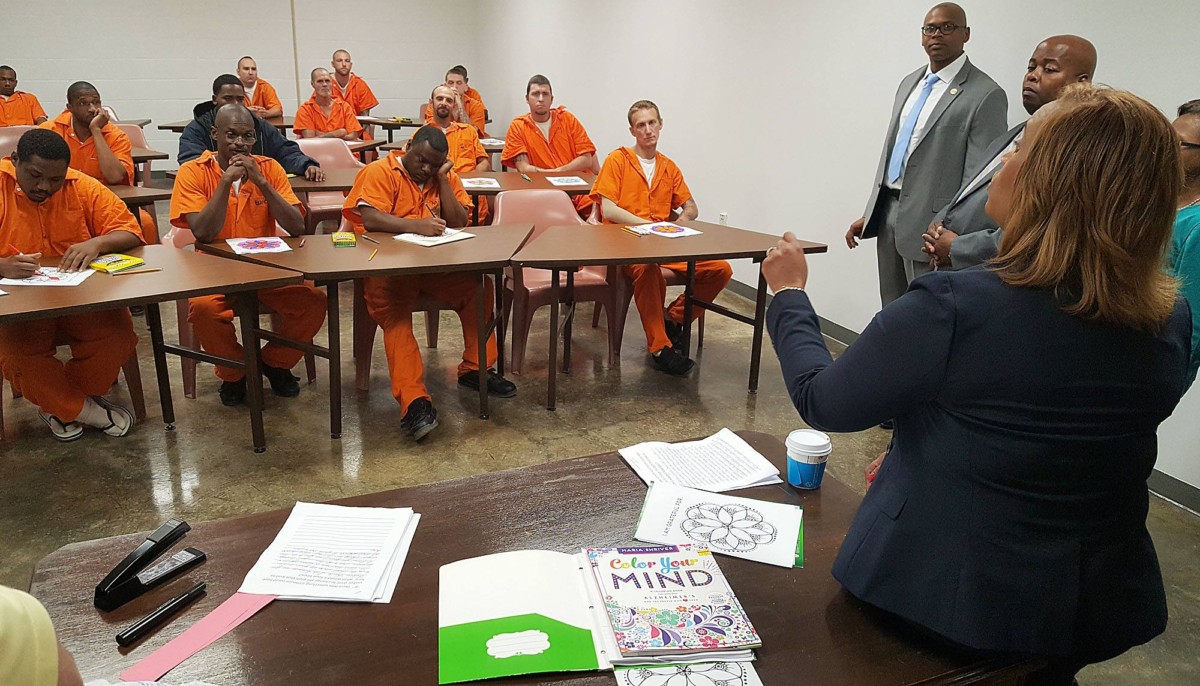 The Delta Correctional Facility in Greenwood has re-opened as a technical violation center and with Mississippi having one of the highest rates of incarceration in the United States, Mississippi Department of Corrections, MDOC, Commissioner Pelicia Hall says the new facility is about treatment and rehabilitation, not incarceration.

“As we move forward in addressing the needs of individuals in our custody here and help them rehabilitate and return to society, this is what this facility is all about,” said Hall.

Delta is holding 279 individuals sentenced to the TVC, plus 79 people in the community work center and 94 for restitution for a total of 452.

Lawmakers and other officials in the 100-plus crowd touring the facility said they liked what they saw. Stops included the classification center where individuals are processed upon arrival, exercise and wellness rooms for employees, the kitchen and cafeteria, medical services, and classrooms.

“We have tried a lot of things in Mississippi corrections and this is a good step in our re-entry efforts to help prepare people for life after their release,” said House Corrections Committee Chairman Bill Kinkade, R-Byhalia. “I’m proud to see this happen and I feel personally invested in it.”

Sen. David Jordan, D-Greenwood, said he was impressed by what he saw.

“I hope these young men take advantage of the chances they have to start over here,” Jordan said. “A lot of people outside care about them, but they also have the responsibility to make the changes they need to make for themselves. The world owes them nothing, but they owe it to themselves.”

Jordan, Kinkade and State Parole Board member Nehemiah Flowers joined Commissioner Hall in talking to many of the probationers and parolees during classroom stops.

Parolee William McQueen, 26, shyly raised his hand from the back of a classroom during one of the classroom visits. “It’s a blessing, man. Because a lot of people got problems,” McQueen said. “They get a second chance to come here instead of going to Parchman. It’s a blessing. It really is. I have not missed a class since I’ve been here.”

McQueen’s comments were similar to others the group heard before the tour ended. The impromptu statements echoed four testimonials presented earlier in the day.

Parolee Jason Aldrich, who was among those presenting, said being at the TVC has already made a difference in his life.

“I’ve learned a few tools to use in classes here like I need to plan my free time,” said 36-year-old Aldrich. “I do better with structure in my life. My favorite class is cognitive thinking. I want to be groomed for success, not for failure. I’ve always been punished but not really corrected.”

Aldrich said his first encounter with the criminal justice system began during his teen years and that the classes at the facility touch base on real-life scenarios to help inmates find solutions to the issues instead of being part of the problem.

“I learned some interesting things,” Saltz, 38, said. “I learned where to go and what to do to get what I need to live, and if these classes hadn’t been here, I would be lost after my release.”

Greenwood Mayor Carolyn McAdams, who worked at Delta as a financial manager when it was a private prison, said she is glad to see the facility being used for something constructive.

“It was good to see the commissioner speak from the heart and see the passion she has to make this commitment,” said McAdams. “The work is very rewarding and appreciated.”

Commissioner Hall added that she is committed to fulfilling a pledge she made during her confirmation hearing in 2017 to address concerns about the TVC program and to provide meaningful rehabilitation to individuals in the MDOC’s custody.

“I believe that by using Delta as a TVC, we can do both,” she said.