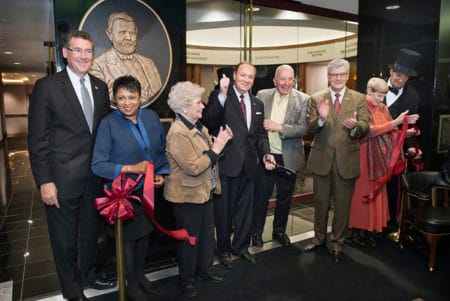 Leaders in education, history, libraries and government — including the Librarian of Congress and the Archivist of the United States — praised the 21,000-sq.-ft. addition. The facility contains a state-of-the-art museum chronicling Grant’s life and his significance in American history and a gallery dedicated to the Frank and Virginia Williams Collection of Lincolniana, a recent donation that was considered the largest privately owned Abraham Lincoln collection in America. With hundreds of thousands of historical documents and items housed on-site, the new addition makes Mississippi State a leading destination for research on the Civil War and two presidents who shaped the course of American history.

“The Frank J. and Virginia Williams Collection of Lincolniana and our remarkable Ulysses S. Grant Collection have made Mississippi State and the Grant Presidential Library a truly national center for the study of the American Civil War,” MSU President Mark E. Keenum said.

MSU is one of six universities in the nation housing a presidential library. The Grant Library is managed by the Ulysses S. Grant Association and MSU under the direction of John F. Marszalek, Grant Association managing editor and executive director, and Frances N. Coleman, MSU dean of libraries.

“In 1862, President Lincoln admonished the American people with, ‘it is not that we can imagine better, but can we all do better?” said Ulysses S. Grant Association President Frank J. Williams. “I am pleased to say that with these galleries, the collections that support them, the wonderful staff that serves them and the people that use them, we have, in a significant way, done better.”

Thursday’s ceremony featured remarks from Librarian of Congress Carla Hayden, Archivist of the U.S. David Ferriero and other U.S. and Mississippi officials.

“I’m here to give a pledge,” Hayden said. “You will have the full resources and services of the Library of Congress to supplement and be a partner with you as you try to expand these resources here. We wanted to say that publicly here today.”

The Grant Presidential Collection consists of some 15,000 linear feet of correspondence, research notes, artifacts, photographs, scrapbooks, and memorabilia. There also are 4,000 published monographs on various aspects of Grant’s life and times. The collection housed at Mississippi State is the largest single collection of Grant papers and additional items in the world.

The gallery for the Frank J. and Virginia Williams Collection of Lincolniana displays, on a rotating basis, more than 100 of the 17,000 priceless artifacts and 12,000 books included in the Williams Collection, which the former Rhode Island Supreme Court Chief Justice and his wife, Virginia, have amassed over several decades. The gallery exhibit includes commentary from Williams on the relevance and importance of featured items.

“Lots of people could take credit for what we are celebrating today, but it was a real team effort,” Ferriero said. “As [MSU quarterback] Nick Fitzgerald tweeted on Sunday night, ‘a program is bigger than one person. We pride ourselves on our ability to always give relentless effort.’ The results of that relentless effort are evident as I walk around this campus today.”

“Thousands upon thousands will come to see these exhibits,” said Gov. Phil Bryant. “They will marvel that it is here in Mississippi and they will come to know us better. This is a great day for Mississippi’s future.”

U.S. Representative Gregg Harper praised the library as well saying that it was one of a kind.

“There is no other library like the one we are celebrating today,” said U.S. Rep. Gregg Harper shortly before announcing he would like MSU Libraries to be the home of his congressional papers. “This structure is now a one-of-a-kind collection, including the Frank J. and Virginia Williams Collection of Lincolniana, as well as Mississippi State University’s Congressional and Political Research Center, which houses nine congressional collections, including those of many well-known MSU alumni … If it’s OK with Dean Frances Coleman, I would like to be the 10th.”