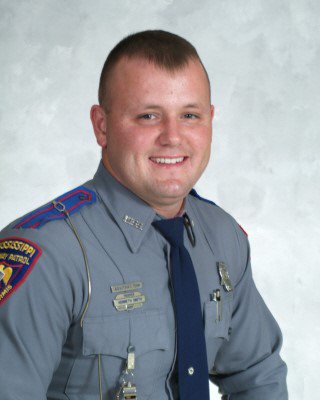 An off-duty state Trooper was shot and killed on Sunday. Law Enforcement officials say the shooting happened at approximately 12:45 a.m. near the Tippah County/ Alcorn County line. A suspect has been arrested in the investigation and the loss comes one day after two Brookhaven police officers were killed in an unrelated shooting.

When officers arrived they found two people suffering from gunshot wounds and the victims have been identified as 38-year-old Rickie Dale Vick of Michigan City and 38-year-old Trooper Kenneth Joshlin “Josh” Smith of Walnut. While Vick was transported to a local hospital with non-life threatening injuries, Trooper Smith was “mortally wounded” and was pronounced dead on the scene.

The suspect has been identified as 43-year-old Troy Anthony Eaton, of Rienzi. Local, state and federal authorities assisted in the search for Eaton and he surrendered to law enforcement authorities just a few hours later at approximately 5:30 a.m.

We are deeply saddened by the loss of Trooper Kenneth “Josh” Smith. This has been a tragic weekend for law enforcement and our state with the deaths of three officers to the very violence they are sworn to protect against. Our deepest condolences to the families of these heroes. pic.twitter.com/AiyGigpOKa

The Mississippi Bureau of Investigation said the case remains open and the investigation is on-going.

“These brave men and women stand on the wall for us all,” said Governor Phil Bryant. “Josh now walks the streets of Glory so we may rest peacefully in our homes. We must never forget.”