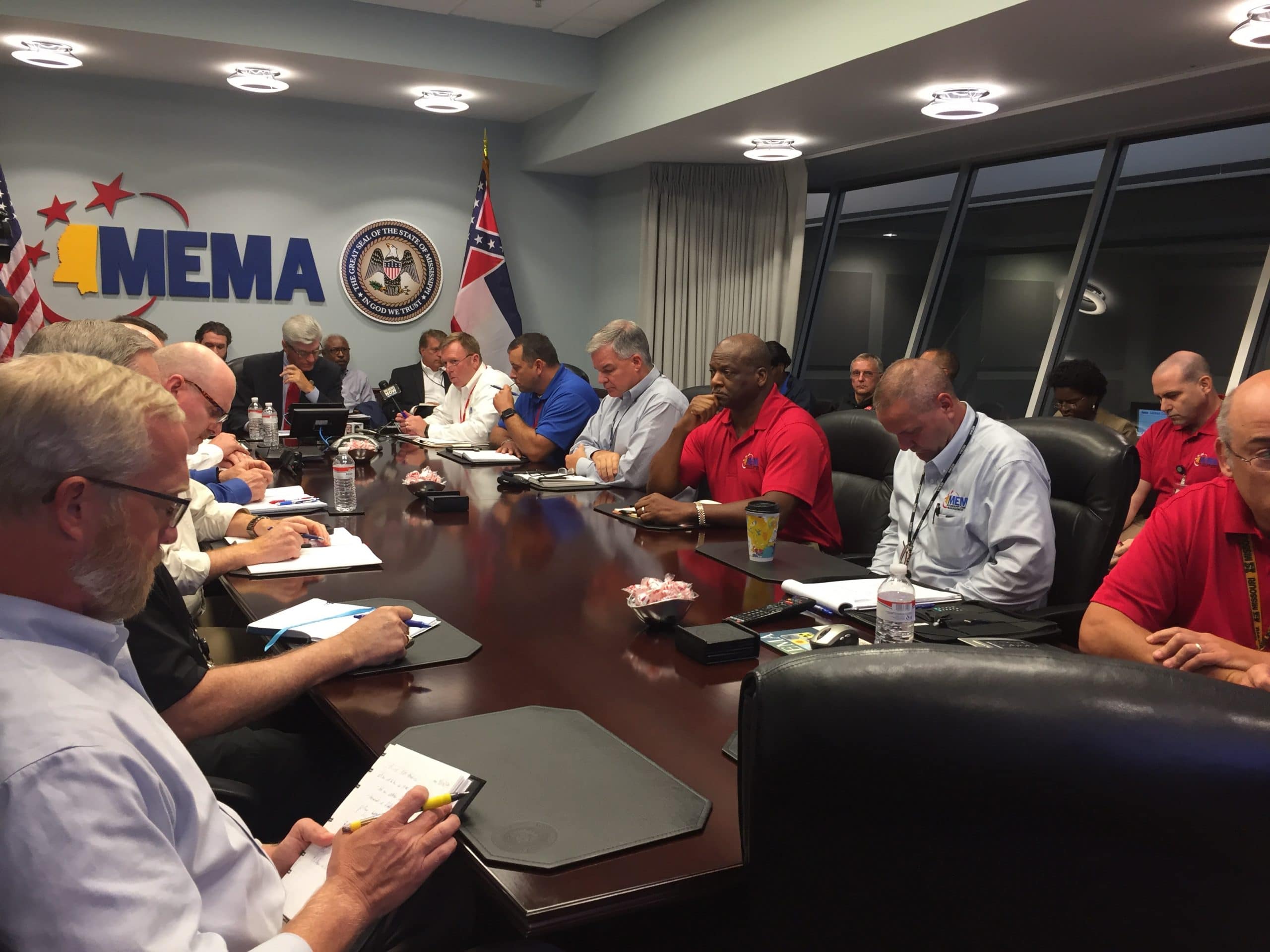 As Hurricane Harvey continues to invade the Houston area of Texas, meteorologists are predicting it could take a turn and potentially affect areas of the Magnolia state.

Officials met at the Mississippi Emergency Management Agency (MEMA) headquarters on Monday to discuss the trajectory of the storm, as well as relief efforts for Texas.

In the meeting Gov. Phil Bryant, Director of MEMA Lee Smithson and several other agency heads gathered to hear from the National Weather Service and discuss Mississippi’s role in relief efforts moving forward.

Frank Rivett, with the National Weather Service out of New Orleans said that Hurricane Harvey is still on the move and the greatest concerns for Mississippi at this time is potential thunderstorms and tropical storm winds.

Harvey is expected to drift off of the Texas coast by Wednesday and move North, Northeast. Meteorologist say a slight strengthening could occur.

As of now heavy rain bands are coming from the west that could produce rotations. The central Louisiana area and Southwest Mississippi are under a tornado watch at this time. Rivett said as long as the storm stays to the west the worst Mississippi should see is severe thunderstorms.

“The best we can do is to continue to monitor what may come from this particular event, but also give us an opportunity to respond in a real world situation,” said Gov. Bryant.

The rains are expected to last through the week with tornado watches and flash flood watches. The rains should die down during the weekend, and things should become more normal come Monday.

The Governor and Director Smithson then spoke to disaster relief urging folks not to dispatch alone but to work with an organized volunteer group if they want to help those in Texas currently being affected.

So far the state of Texas has only sent out 20 requests for assistance, most of which are going to states to the west of them.

“I think it is important to understand the difference in Texas and Mississippi. The Texas population is 25.1 million and there are 4 million people impacted right now because of this storm. So Texas can take care of Texas,” said Director Smithson.

Smithson said the best thing Mississippi can do right now is be patient and wait to see what Texas really needs before people start to jump in and volunteer. History suggests that while this storm may be devastating, the past clearly shows that more storms could follow and if everyone is gone volunteering it could leave Mississippi vulnerable to another tropical storm.

Anyone who wants to volunteer needs to go to the national Volunteer Organization Active in Disasters (VOAD) website .

Warren Miller, President of VOAD said right now is not the right time to go and do not self deploy.

“As devastating as this storm is, Texas has the resources right now at least to really be able to take care of their own,” said Smithson.