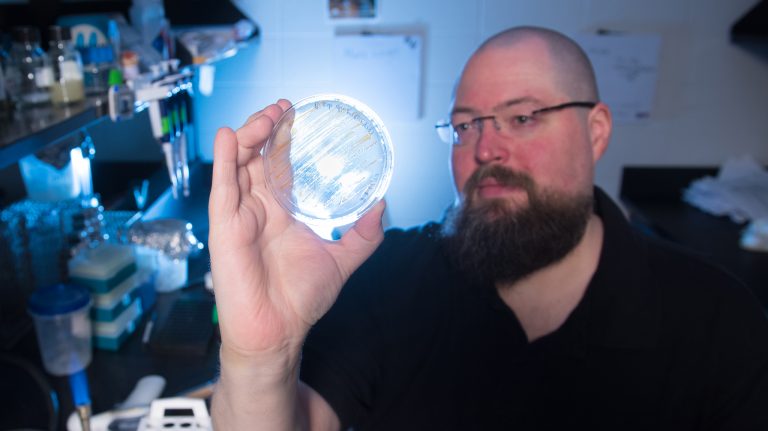 With funding from his International Space Station Flight Opportunity Award, UM biology professor Patrick Curtis will be sending bacteria from his lab to the ISS. Photo by Kevin Bain/Ole Miss Digital Imaging Services

A University of Mississippi professor will be sending bacteria to space soon with the goal of improving future spaceflights. Patrick Curtis is an associate professor of biology and has been awarded an International Space Station, or ISS, Flight Opportunity Award, which will send bacteria grown in his Ole Miss laboratory to the space station in the coming years.

The purpose of the project, titled “Assessment of Whole Genome Fitness of Bacteria under Microgravity,” is to better understand how bacteria respond in very weak gravity, which could possibly lead to better bacterial control mechanisms in space. These mechanisms could prove invaluable to maintaining both human and machine health aboard long-term spaceflights.

“It’s pretty common knowledge that living organisms change in response to microgravity and spaceflight, such as humans losing bone density, but hardly anyone has looked to what happens to bacteria under those same conditions,” said Curtis. “While one could think bacteria wouldn’t care about gravity, being so small, the handful of studies that have been performed have shown bacteria do respond to spaceflight. This can be a pretty big deal, since bacteria live everywhere and can have a tremendous impact on our lives, either by affecting human health or the functioning of equipment.”

“The problem with previous studies is that they mostly focused on one or two specific aspects of bacterial life,” he said. “My laboratory is among the pioneers of a technique called TnSeq, which uses random mutagenesis and high-throughput sequencing to assess the usefulness of every gene in a bacterial genome under a given condition. We propose to perform TnSeq on a select group of bacteria grown aboard the ISS to see just what kind of processes are important to bacteria when living aboard a spacecraft.”

The Flight Opportunity Award is granted through NASA’s Established Program to Stimulate Competitive Research or EPSCoR. According to NASA, the EPSCoR objectives include contributing to and promoting the development of research infrastructure in areas of strategic importance to the NASA mission and contributing to overall research infrastructure, science and technology capabilities, higher education, and/or economic development.

“We are excited that Dr. Curtis’ research will be sending his bacteria up to the International Space Station,” said Gregg Roman, UM professor and chair of biology. “Bacteria are part of every human ecosystem, which includes the ISS. The long-term colonization of space will require us to better understand how beneficial and harmful bacteria respond to microgravity and grow in space.

“Dr. Curtis’ project will provide critical information as to how different species of bacteria change their growth and physiology in the microgravity found on the ISS, providing much-needed information for the control of bacteria in future missions to deep space.”

The project will “ask” a few different bacteria to list all the things important to them during spaceflight, Curtis said.

“Not only will this tell us what’s important to a given bacterium, but it may reveal processes that are important to all bacteria during spaceflight,” he said. “Hopefully, this will give us a better idea on how to control bacterial growth aboard space vehicles in the future.”

Curtis is recruiting a graduate student to work on the project, who should begin in the fall. Also, more testing and optimizing of the project are needed before the project is ready to head to the ISS, so his best guess for when the bacteria will be aboard the space station is one to two years from now.

The project is funded for $100,000, and Curtis serves as the project’s co-principal investigator. The project’s principal investigator is Nathan Murray, senior scientist for aeroacoustics, with the UM National Center for Physical Acoustics, or NCPA, and director of the Mississippi Space Grant Consortium. The consortium is a statewide nonprofit organization of higher learning institutions with the mission of enhancing and supporting aerospace science and technology efforts and activities in Mississippi.

“The process of getting an experiment packaged, prepared and certified for flight on the ISS is unique and nontrivial,” said Murray, who also works as the associate director for program development at NCPA and as a research assistant professor of chemical engineering. “It is extremely valuable to learn from someone who has already gone through this process successfully.

“Dr. Curtis is the second awardee to receive an ISS Flight Opportunity Award in Mississippi recently, the first being (UM civil engineering professor) Ahmed Al-Ostaz. With Dr. Curtis in biology and Dr. Al-Ostaz in advanced materials, these awards establish the experience that other Mississippi researchers can leverage into future successful Flight Opportunity Award research.”

The award, based upon work supported by NASA under award No. 80NSSC19M0013 and funded from Aug. 1, 2019, to July 31, 2021, continues Curtis’ high-profile research at UM. In 2016, he received a Faculty Early Career Development Award from the National Science Foundation for his research on “Investigation of Conserved Global Regulatory Systems Using Cross-organism Comparison.” The award, for $767,103, is funded through February 2021.

“My laboratory has a couple of different areas of interest, but they mostly revolve around the topic of bacterial signaling,” Curtis said. “We are trying to unravel the internal wiring of bacteria to see how they are all connected and how bacteria can integrate signaling systems to create more complex signaling networks.”